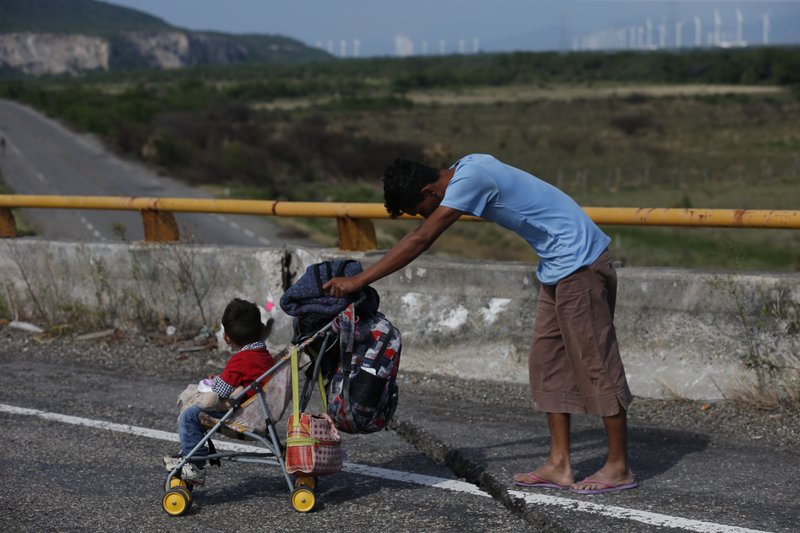 Thousands of weary Central American migrants in a caravan that has advanced 250 miles (410 kilometers) into Mexico but remains far from the U.S. border hope they won’t have to walk anymore, at least for a while.

Representatives of the group sought Wednesday to negotiate use of dozens of buses to carry the migrants hundreds of miles ahead, as the caravan took at least a day off from the grind of walking and hitching rides in packed trucks from small town to small town.

But as of the afternoon, there was no outward sign they’d had success in finding buses to carry them.

After bedding down at a city-owned property on the outskirts of the southern city of Juchitan, the migrants wandered around looking for something to eat as classic songs by Mexican singer Vicente Fernandez, known as “the king of ranchera music,” played in the background. Loudspeaker announcements discussed bathroom use and a prohibition on charging money to power their cellphones.

Red Cross personnel bandaged the swollen feet of Honduran farmer Omar Lopez, who had been pounding the hot asphalt of highways every day for the last two weeks after spending nights on concrete sidewalks with just a thin sheet of plastic for cover.

“We are waiting to see if they are going to help us out with buses, to continue the trip,” said Lopez, 27.

Organizers say the buses, if they do materialize, would take the estimated 4,000 migrants to Mexico City for meetings with legislators, not to the still-distant U.S. border, though some would probably continue to the border after reaching the capital.

That might not play well with U.S. officials: White House press secretary Sarah Huckabee Sanders on Wednesday specifically praised Mexico for stopping the migrants from getting rides.“Mexico has stepped up in an unprecedented way,” Sanders told Fox News. “They have helped stop a lot of the transportation means of these individuals in these caravans, forcing them walking. They have helped us in new ways to slow this down, to break this up and keep it from moving as aggressively toward the United States.”

The Mexican government, has, in fact, taken a fairly contradictory stance on helping or hindering the first caravan, reflecting the country’s balancing act: Officials don’t want to irk Trump, but Mexicans themselves have long suffered mistreatment as migrants.

For the first week of the caravan, Mexican federal police sometimes enforced obscure safety rules, forcing migrants off paid mini-buses, citing insurance regulations. They also stopped some overloaded pickup trucks carrying migrants and forced them to get off. But in recent days, officials from Mexico’s immigrant-protection agency have organized rides for straggling women and children on the caravan as a humanitarian effort.

And police have routinely stood by as migrants piled aboard freight trucks.

But the first caravan — which planned to take a day of rest Wednesday in Juchitan, about 900 miles from the nearest U.S. border crossing — is only the start.

A second, smaller group of 1,000 or so migrants who forced their way into Mexico on Monday was trailing some 250 miles back. They spent Tuesday night in the city of Tapachula.

Behind them, a third group of migrants from El Salvador had already made it to Guatemala, and on Wednesday a fourth group of about 700 Salvadorans set out from the capital, San Salvador, with plans to walk to the U.S. border, 1,500 miles away.

Salvadoran man Jose Santos, 27, brought his baby son with him on the quixotic quest.

“I didn’t want to go, but I’m unemployed and I have to get money to buy food for my son,” Santos said. “There is no work here, and the violence never stops.”

The caravans combined represent just a few days’ worth of the average flow of migrants to the United States in recent years. Similar caravans have occurred regularly over the years and passed largely unnoticed, but U.S. President Donald Trump has seized on them to try to make border security a hot-button issue less than a week before midterm elections.

The Pentagon has announced it will deploy 5,200 troops to the Southwest border, though federal law restricts the military from engaging in law enforcement on U.S. soil. So their role would largely be limited to activities such as providing helicopter support for border missions, installing concrete barriers and vehicle maintenance, rather than detaining migrants.

Trump tweeted Wednesday: “We will NOT let these Caravans, which are also made up of some very bad thugs and gang members, into the U.S. Our Border is sacred, must come in legally. TURN AROUND!”

Worn down from long miles of walking and frustrated by the slow progress, many migrants have done just that, dropping out and returning home or applying for protected status in Mexico. The initial group is significantly diminished from its estimated peak at more than 7,000 migrants. A caravan in the spring ultimately fizzled to just about 200 people who reached the U.S. border at San Diego.

In Juchitan, Omar Lopez, the Honduran farmer, said playing soccer back home had given him stamina but the “exaggerated” walk has taken its toll.

“The sacrifice is worth the effort,” Lopez said. “I promised to buy my son a real motorcycle and I’m going to make good. I promised him many other things ... not only things, I also want to give them education. Everything good costs money.”