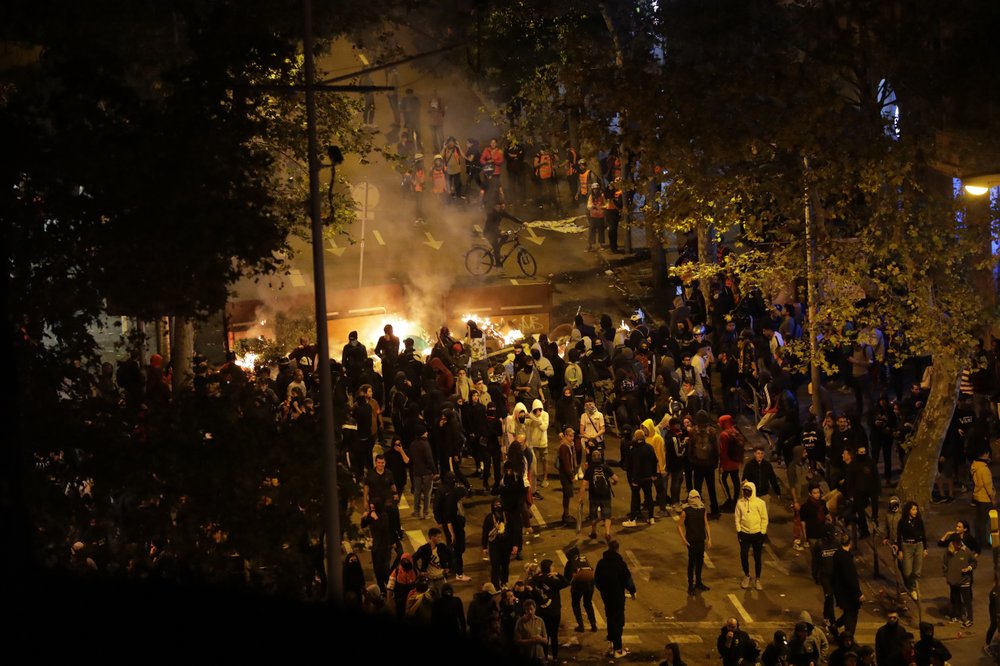 The Spanish city of Barcelona returned to relative calm over the weekend, after six days of violent protests against Monday's controversial jailing of nine separatist Catalan leaders left hundreds injured.

Authorities are still assessing the cost of the separatist unrest to the region, which accounts for a fifth of Spain's economic output.

The Spanish Transport Association estimates the industry has lost 100 million euros ($112 million) in a week. One transport industry association, CETM, has predicted roadblocks alone will cost 25 million euros a day.

Barcelona authorities say the city has lost an estimated 1.5 million euros through damage, because of the violent protests.

Barcelona's city council said hundreds of public trash cans were set on fire and 107 police cars were vandalized during Friday's mass protests. While 57 flights were canceled.

The city council is also warning the cost of repairs to buildings and shuttered businesses will mount if the protests continue.

Catalonia accounts for around 20 percent of Spain's GDP and the region, which attracts about 20 million tourists a year, is also reliant on exports.

Business association Barcelona Oberta is stressing the violence will have a direct impact on the region's economy, referencing the failed referendum of October 2017, when tourism fell by 5 percent.

Over the weekend, there were some clashes between protesters and police on Barcelona's famous Las Ramblas.

The Spanish authorities are braced for more violence amid concerns an online movement, describing itself as "Tsunami Democratic" will orchestrate a spontaneous mass protest on Monday.

Not all protesters are demanding Catalonia's independence. Groups of Spanish unionists gathered in central Barcelona earlier on Sunday to call for national unity.

Separately, a coalition of business community representatives and workers' unions (PIMEC, FOMENT, UGT and CCOO) issued a joint statement calling for a return to normality, arguing there's a need for social, political and economic stability, so dialogue can continue. The statement said: "Recovering institutional normality will allow for a negotiation process to find satisfactory solutions for all parties impacted by the conflict."

Catalonia's president, Quim Torra, urged Spain's prime minister, Pedro Sanchez, "to sit at a negotiating table to talk," in an attempt to resolve the matter.

But Sanchez said Torra must first "strongly condemn the violence, which he has not done so far."