A shooting at an industrial zone for a settlement in the occupied West Bank on Sunday that wounded three Israelis was a "terror" attack by a Palestinian, the Israeli army said. 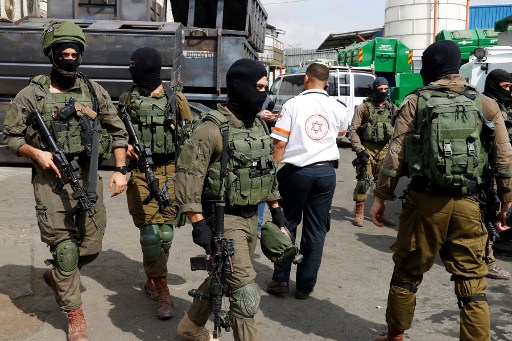 Israeli security forces gather at the site of a reported attack at the Barkan Industrial Park near the Israeli settlement of Ariel in the occupied West Bank on October 7, 2018. Three Israelis were seriously wounded in a shooting at an industrial zone for a West Bank settlement, police and medics said, in a possible Palestinian militant attack. (AFP Photo)

An army spokesman told AFP it had determined the shooting was an act of "terror," with the identity of the 23-year-old Palestinian perpetrator, who had been employed at the Barkan plant in which the shooting took place, known to security forces.

Israeli security forces were searching for the Palestinian.