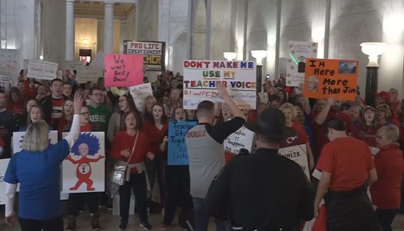 West Virginia teachers said their strike would go on at least through Monday, as state lawmakers unraveled the governor’s promise of a raise in a late Saturday night legislative session, union officials said.

More than 277,000 students have been out of school since Feb. 22, as teachers and other school employees pushed for higher pay, protesting that their wages are among the lowest in the United States.

But the Republican-controlled Senate balked at that plan, offering a 4 percent raise instead.

Dale Lee, the president of the West Virginia Education Association, said in a Facebook video to the membership on Saturday night,“We’re asking that all public schools in West Virginia be closed again Monday and remain closed until the senate honors the agreement that was made.”

Media reports said that the other unions, the Federation of Teachers-West Virginia and the School Service Personnel Association, also called for schools to remain closed.

“They believed that we were bluffing when we said we would hold their feet to the fire,” Lee said, while calling for the strike to continue.

Governor Justice said in a tweet on Saturday night,“We’ve got to our kids back to school.” He added,“It’s time to quit playing politics.”

Neither union representatives nor a spokesperson for the state Senate were immediately available for comment.