WORLD Western media 'desperate' to doubt WHO findings they don't like

Western media 'desperate' to doubt WHO findings they don't like 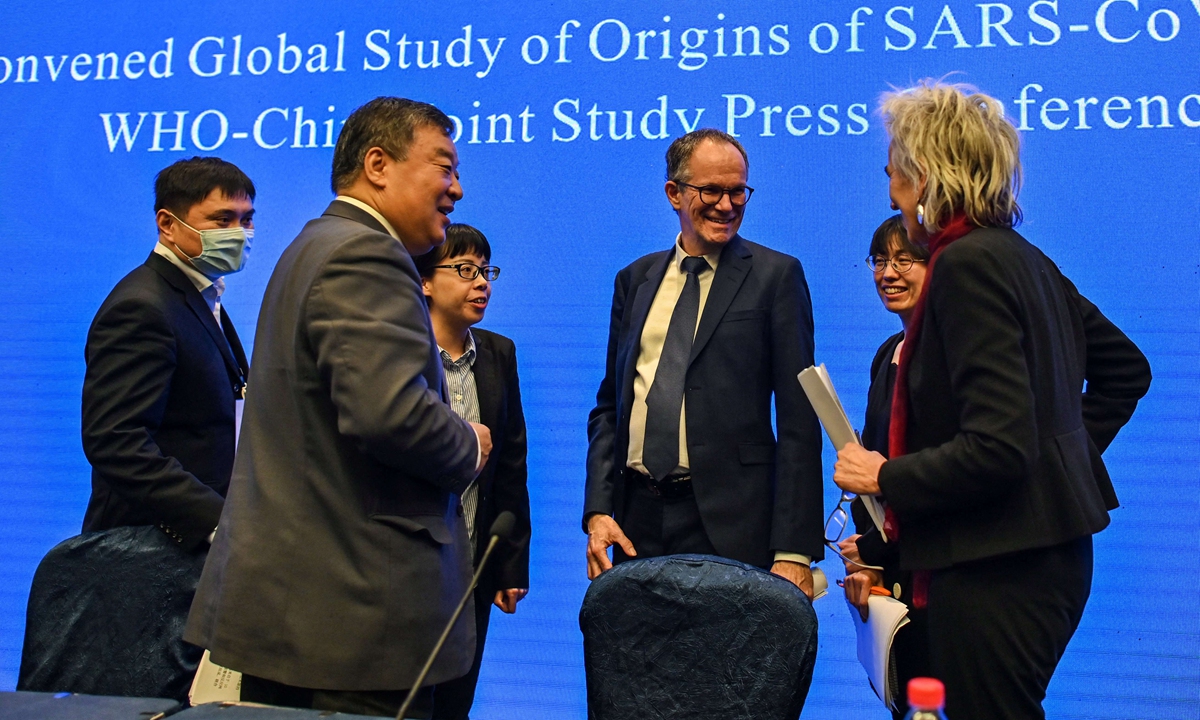 Peter Ben Embarek (center) talks with Liang Wannian (left) and Marion Koopmans (right) after a press conference to wrap up a visit by an international team of experts from the World Health Organization (WHO) in the city of Wuhan, in Central China's Hubei Province on Tuesday. (Photo: AFP)

As the World Health Organization expert team is busy finalizing the origins-tracing report after its visit to Wuhan, conspiracy theories have arisen in Western media trying to undermine the trustworthiness of the report. Observers said these politically driven acts will not benefit the science-based efforts to trace the virus origins, and called on the media to focus on what real progress has been made scientifically.

Australian cable channel Sky News Australia recently hyped that three of the WHO experts had links to Chinese institutions, in an attempt to question the team's investigation conclusions.
Marion Koopmans responded on Twitter and criticized the Australian media of spreading conspiracy theories, saying if her previous work as a scientific advisor to the Center for Disease Control in South China's Guangdong Province means that she did work for the Chinese government, she has also worked for Europe and the US.
Chinese observers said that when the results WHO experts released were not the same to what the Western media had expected, some Western media outlets are desperate to throw doubts on the virus sources probe to fit their own political narrative.
The WHO has demonstrated its fairness and authoritativeness as it seeks the virus origins by convening 17 international scientists who are leading experts in their fields to travel from different countries to Wuhan, Yang Zhanqiu, deputy director of the pathogen biology department at Wuhan University, told the Global Times on Wednesday.
WHO Director-General Dr Tedros Adhanom Ghebreyesus previously told a virtual press conference from Geneva that this will not be a WHO study or investigation because it is an independent study which is composed of independent individuals from 10 institutions.
The facts will speak for themselves eventually and it is not the interests of the WHO, a professional international organization in health, to show favor toward China, Yang said, adding the repeated conspiracy theories from Western media that are politically driven bring no benefit for science-based questions on the virus, which still require global efforts to solve.
Following the visit to Wuhan to probe the sources of the virus, the expert team said all hypotheses on the origins remain open, and that it was not looking further into the question of whether the virus escaped from a Wuhan biolab because it was considered "highly unlikely."
Li Haidong, a professor at the Institute of International Relations of the China Foreign Affairs University, told the Global Times that the Western media and some politicians have already preestablished that the virus came from China and they regarded any other conclusions as "unscientific." Their attempts at reversing the facts expose their real intention of taking China as a culprit.
Prior to the accusations from Australian media, Peter Daszak, a British zoologist and member of the WHO expert team, and Thea K?lsen Fischer, a Danish epidemiologist on the team who echoed Daszak, had openly exposed and criticized The New York Times of twisting and misquoting their words on the virus origins probe to fit its own narrative.
The report by The New York Times headlined "On WHO Trip, China Refused to Hand Over Important Data" accuses China of failing to share important data that may help in identifying the origins of the virus and prevent future outbreaks.
Those international experts and Chinese experts made a step closer to answering the question of the virus origins by ruling out the hypothesis that the virus escaped from a laboratory, and the achievement is significant for scientists to conduct further studies on the origins of the virus in other countries, Yang said.
Sky News Australia and The New York Times are turning a deaf ear and twisting facts using groundless reasons, which will only harm their reputations, Chinese observers warned.
Reports said the international expert team is working on a summary report which is expected to be published this week, and a full final report will be released in the coming weeks.
Peter Ben Embarek, head of the team to Wuhan, said at the press conference that their survey report would be a "consensus document." He said it will be a joint report between the international expert team and their Chinese counterparts.
"We have worked on this together, and therefore it is not a question of one side having a say on what the other side is concluding, but more having a consensus document on our joint key findings, conclusions, and recommendations," Ben Embarek said.
Yang called on the international community to take a scientific approach and focus on any progress on the issue, and encourage the WHO international team to conduct further studies on the virus origins in other places of the world just as they did in China, rather than wasting energy on playing a blame game.