The northern Arizona city of Flagstaff is synonymous with mountains — lush with ponderosa pines, meadows, and hiking trails that are a usual respite from the desert heat.

Now, parts of them are burning yet again this year, fueled by winds that grounded air resources Monday. Fire crews were anticipating more moderate winds Tuesday and throughout the week that could help them get a better handle on the blaze that has largely spared homes but made a run into a wilderness area and toward a lava dome volcano. 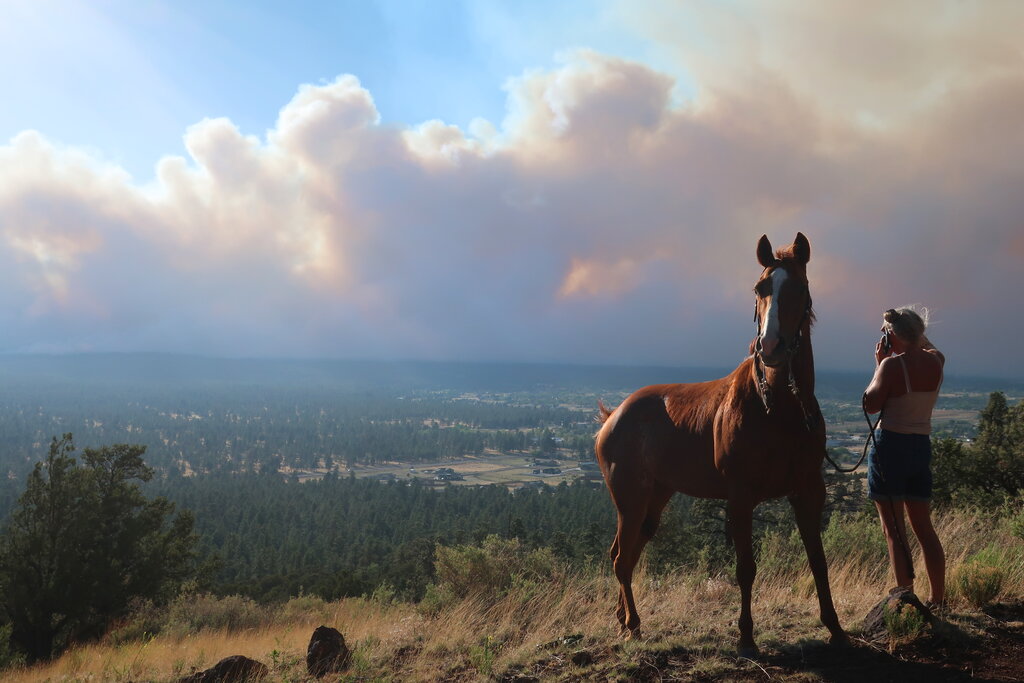 Residents around the city looked toward the mountains as smoke billowed through the air and winds howled, some scared, some nervous — most all hoping that moisture in the forecast late this week brings some relief.

“We're most definitely dry,” Flagstaff resident Colin Challifour said late Monday. “The forests are dry. It's unfortunate. You don't like to see it.”

Roughly 2,500 homes have been evacuated because of two wildfires burning on the outskirts of Flagstaff. One home and a secondary structure burned, the Coconino County Sheriff's Office said. Hundreds of other people in California and New Mexico also have been forced to flee their homes threatened by wildfires.

In northern Arizona, Coconino County declared an emergency because of the wildfire.

Fire incident Cmdr. Aaron Graeser said the Flagstaff-area blaze is one of the top priorities in the country for firefighting resources. It was estimated at 8 square miles (20 square kilometers) late Monday, but fire managers haven't been able to do aerial mapping.

Wildfires broke out early this spring in multiple states in the Western U.S., where climate change and an enduring drought are fanning the frequency and intensity of forest and grassland fires. A springtime fire outside Flagstaff destroyed more than two dozen homes. Most of the residents who evacuated then are out of their homes again in the latest wildfire.

The number of square miles burned so far this year is more than double the 10-year national average, and states like New Mexico already have set records with devastating blazes that destroyed hundreds of homes while causing environmental damage that is expected to affect water supplies.

Even in Alaska, forecasters have warned that many southwestern fires have grown exceptionally over the last week, which is unusual. Southwest Alaska normally experiences shorter periods of high fire danger because intermittent rain can provide relief, but since mid-May the region has been hot and windy, drying out vegetation.

Favorable weather Monday helped slow the progression of a tundra wildfire just over 3 miles (4.8 kilometers) away from an Alaska Native village. Moderate temperatures and a shift in the wind that had been driving the fire toward St. Mary’s will allow firefighters to directly attack the flames and increase protections for the Yup’ik community.

The lightning-sparked fire is estimated at about 193 square miles (500 square kilometers). It's burning dry grass and shrubs in southwest Alaska's mostly treeless tundra.

In California, evacuations were ordered for about 300 remote homes near a wildfire that flared up over the weekend in forest land northeast of Los Angeles near the Pacific Crest Trail in the San Gabriel Mountains. It had scorched about 1.5 square miles (3.9 square kilometers) of pine trees and dry brush as of Monday and was 18% contained, fire spokesperson Dana Dierkes said.

Farther south in San Diego County, five people were rescued after a small wildfire broke out Monday near the U.S.-Mexico border, authorities said.

In Northern California, a 50-mile (80-km) stretch of State Route 70 was closed indefinitely on Monday after mud, boulders and dead trees inundated lanes during flash floods along a wildfire burn scar.

The causes of the latest California fires were under investigation.

Authorities don't yet know what started the northern Arizona fire. A man who was camping near where the fire was reported Sunday was cited a day earlier for lighting toilet paper on fire in violation of a year-round fire ban in the area, but he is not charged with starting the wildfire.

Parts of U.S. Route 89, the main route to reach the Grand Canyon's East Rim entrance and through the Navajo Nation remained closed, as did the Arizona Snowbowl ski resort.