JUBA, Oct. 6 (Xinhua) -- The World Food Programme (WFP) has for the first time used boats to deliver food aid via a new river route to an isolated and conflict-torn region in northwestern South Sudan since the country became independent in 2011. 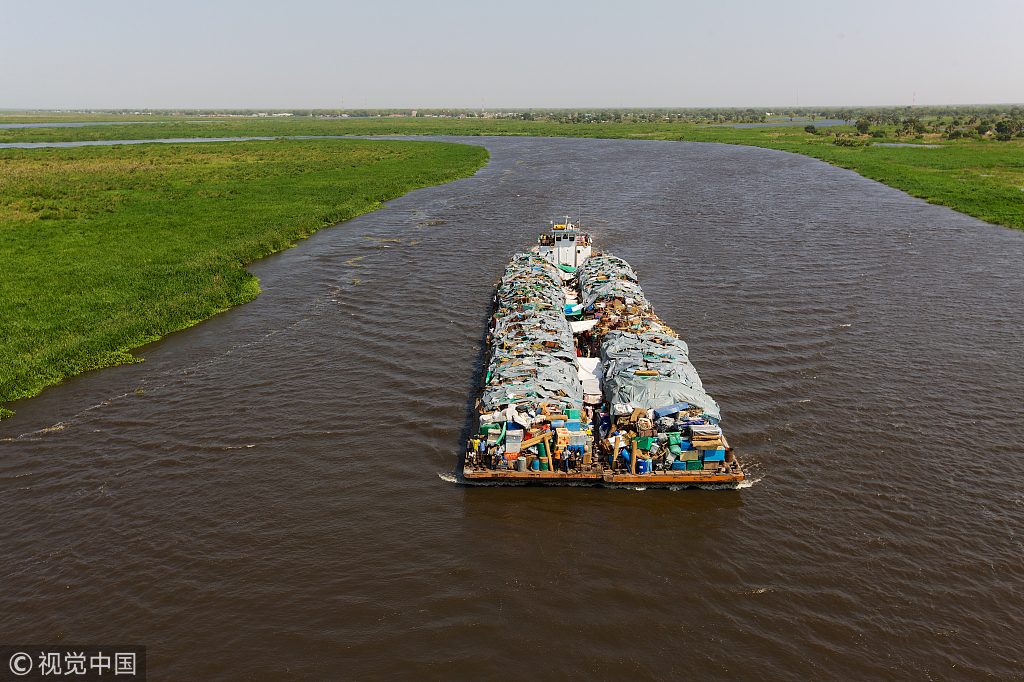 The WFP said with reduction in cases of insecurity in the former Upper Nile region, the newly opened Sobat river route will be an alternative to transport food aid brought through neighboring Sudan to seven hard-to-reach locations in Ulang and Nyirol counties.

"River transport was challenging because of security issues, but now things are improving and the boat operators are willing to work with the UN, which is a great breakthrough and we want to expand that further," Cammelbeeck said.

Cammelbeeck said aid delivery in South Sudan is complicated due to insecurity and poor infrastructure, adding if river transport could be expanded, it will reduce dependence on the costly airdrop which cost six to seven times higher than river and road transport.

"It is a win-win for WFP, for the community, for the donors and the private sector. So we want to extend this further," he added.

At Dome, a small fishing village along the Sobat River, residents said the opening of the new water way will rescue them from hunger after a fleet of 11 boats and a barge recently offloaded 752 tonnes of assorted food commodities.

The fishing village of nearly 40,000 people had spent some four months without receiving food aid.

Mary Nyayua, 40, and her family of six received 90 kilograms of cereals and 9 kilograms of lentils as their monthly food ratio, the first in nearly five months.

Nyayua said the arrival of the food has given her some hope that peace is returning to her home after five years of suffering constant displacement and severe food shortage.

"We suffered so much during the conflict. There was no food. We used to eat leaves, wild fruits and fish," Nyayua told Xinhua.

"We used to get food through airdrop and it was not enough. Now that there is peace, we expect to get more food through the boats."

"We have been hungry all this time because of war. We have been displaced and if the river opens, we will be happy and get enough food to eat," said 32-year-old Olok Makuach.

According to the food security analysis report released at the end of September, the UN agencies and the government warned that 6.1 million South Sudanese, about 59 percent of the country's population, face food insecurity.

South Sudan descended into civil war in late 2013 and the conflict has created one of the fastest growing refugee crises in the world as some 4 million people are said to be displaced internally and externally since 2013.

A peace deal signed in August 2015 broke down in July 2016 following renewed violence in the capital Juba and quickly spread to previously peaceful areas.

Like many South Sudanese, Dome residents are betting on the latest peace deal to salvage them from the ongoing suffering.

"All this time we have been suffering. We eat fish, fruits and grass. Now that they have signed peace and the river has reopened, we are very happy for that. We hope the peace will stay so that we return to our homes," said 65-year-old Lam Kauch.