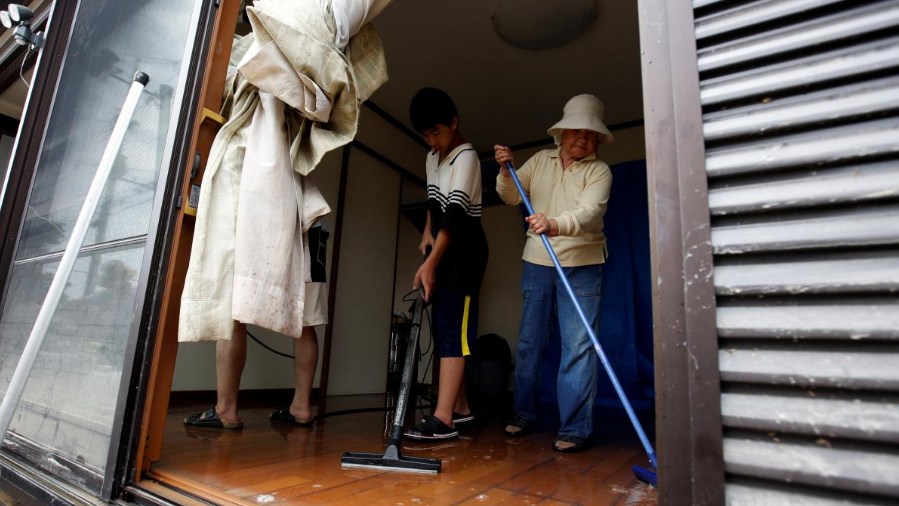 When Isao Akutagawa moved to the sleepy riverside town of Mabi in western Japan 45 years ago, it seemed like the perfect suburb to raise his children.

Land was cheap and he could drive to his job in nearby Kurashiki City. As he built his home next to rice paddies two kilometers from the Odagawa river bank, he heard stories about a flood the year before, but didn’t pay much notice until local politicians began warning residents it could happen again.

“They told us years ago that the Odagawa river levees might break,” said Akutagawa, 79, as he mopped muddy water out of his living room. His home was submerged in a sudden flood earlier this month when heavy rain caused multiple levees to break.

Torrential rains across western Japan this month triggered floods and landslides that killed more than 200 people and left over a dozen missing in Japan’s worst weather disaster in 36 years.

Interviews with more than a dozen residents, officials and experts show how multiple failures increased Mabi’s death toll: flood-control plans were delayed for decades; residents often didn’t understand warnings about the risks; and an evacuation order for the worst-hit area came just minutes before confirmation that a levee had failed.

“We had our local politicians working for years to change the flow of that river,” Akutagawa said. A flood control project finally won approval in 2010 and construction was set to start this autumn.

“If they had started earlier, even four or five years earlier, we wouldn’t have this,” he added.

Kurashiki City officials said they had asked Japan’s land ministry to start work on the project every year since at least 2005. But it was not deemed high enough priority.

However, officials in the city’s emergency management office said they did not blame the central government for the delay.

“The land ministry has to make their decision after seeing all the requests sent in from around the country. Every area, not just ours, make these requests hoping that our river gets picked,” said Hiroshi Kono, an emergency management officer at Kurashiki City. “Of course, it would have made us very happy if ours had been selected sooner.”

Hiroshi Yamauchi, an official at the land ministry’s Chugoku Regional Development Bureau in Hiroshima, said his agency had “followed proper procedures,” but that it was common for large-scale river projects to take years to complete.

Competition for a dwindling budget was partly behind the delay, as was an environmental impact study, said Kairyu Takahashi, head of the prefectural legislature, and a member of a committee that discusses regional public works projects.

“I feel powerless that I wasn’t able to make the government take action,” he said, choking up with emotion. “If we had somehow completed it in time, this may not have happened.”

At a news conference on Friday, Keiichi Ishii, who heads the ministry of land, infrastructure and transport, which oversees flood prevention projects, declined to address whether the high death toll in Mabi was a preventable “human disaster” or who was responsible.

“We recognize that there’s a need to look into steps we can take to reduce the damage from disasters like this even a little bit,” Chief Cabinet Secretary Yoshihide Suga said at a separate news conference last week as the regional death toll mounted.

Many people moved to Mabi after the floods of 1972 and 1976 as flatlands next to two main rivers were developed into a bedroom town. Mabi grew to be a quiet district of about 23,000 people. Elderly residents said they knew about flood risks, but had never seen waters rise much higher than knee-level.

Early proposals, dating as far back as 1968, called for a river bypass and a weir, or small dam, to supply water to farms and reduce flood risks. Resistance from residents on the southern side of the Odagawa river over being cut off from groundwater stalled the plans, Takahashi said.

In 2014, 28 billion yen was allocated for a 30-year plan that included a bypass between the Odagawa and Takahashi rivers. Work on that 10-year project was scheduled to get under way later this year.

Kurashiki City, like all municipalities across Japan, was required under a 2005 law to create “hazard maps” outlining areas at high risk of flooding, landslides and other disasters, and the locations of evacuation centers.

The maps were accurate; large swathes of Mabi marked as risky areas on the maps almost perfectly match the areas overrun by gushing floodwaters.

But there were two problems: the city assumed a pattern of prolonged rain over a wide area rather than an intense concentrated downpour as actually occurred, according to online planning documents, and residents say they paid little attention to the maps.

A near-record 138.5 millimeters of rain fell on July 6 in Kurashiki, second only to the 183.5 millimeters recorded on Sept. 3, 2011, according to weather agency data. Early the next morning, waters broke through levees on the Odagawa and Takamagawa rivers, unleashing flood waters.

Some residents said they had simply ignored the hazard maps; after all, rainfall is relatively rare in Okayama Prefecture, which is known as the “Land of Sunshine.”

“To me, it was just another routine document from the public office,” said Shigezo Kaneko, 80, who was rescued by boat after waters came close to the first-floor ceiling of his two-story house. “I guess I wasn’t really vigilant.”

In 2015, Japan’s Central Land Ministry came up with a policy to better cope with disasters, which included training local authorities on when to issue warnings. But advisories and orders to evacuate are left up to local authorities.

Kurashiki Mayor Kaori Ito announced the first evacuation order, for the area south of the Odagawa river, at 11:45 p.m. At 1:30 a.m. the next day, using loudspeakers, mobile phone alerts, and television and radio messages, the city ordered residents in the heavily populated area north of the river to seek shelter.

That order came just four minutes before confirmation of the first levee failure, on a small Takamagawa river.

Ito, asked about the timing at a news conference, expressed regret but said she had gone by the book.

“It (the order) was issued based on the condition of the river and in line with standards (for issuance),” she was quoted as saying by domestic media. Ito couldn’t be reached last week for further comment about the decision.

Although his family escaped, Atsushi Yamashita, 63, could not persuade one of his neighbors, a man in his 90s, to leave his house just 30 meters from the Odagawa river. The man was later found dead.

“Something similar might happen again in a few years,” said Yamashita as workers slowly cleared a mound of rubble in front of his home. “My wife says she doesn’t want to live here anymore.”