WORLD What Next? UK lawmakers torn on fate of Brexit, and May

What Next? UK lawmakers torn on fate of Brexit, and May

Britain has just a few weeks to break its Brexit impasse, with the fate of the country's departure from the European Union, and of Prime Minister Theresa May, both hanging in the balance. 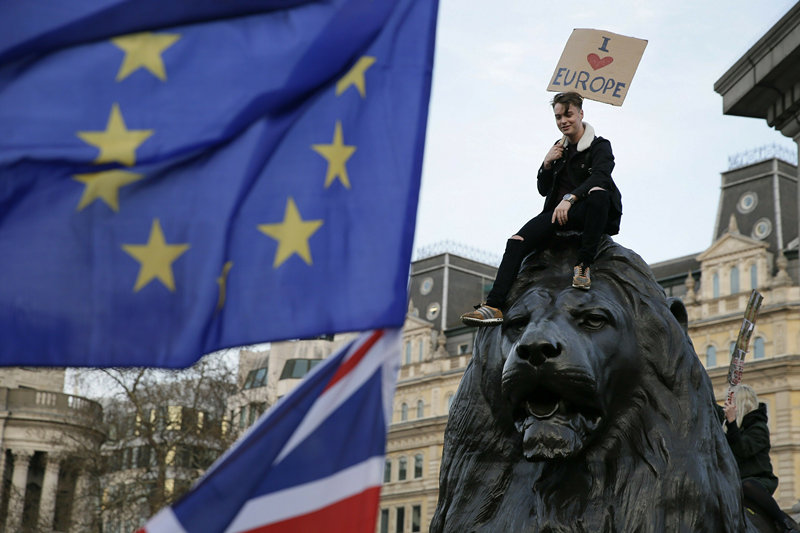 A demonstrator sits on one of the lions in Trafalgar Square during a Peoples Vote anti-Brexit march in London, Saturday, March 23, 2019. (Photo: AP)

DEAL OR NO DEAL

With British politicians deadlocked, EU leaders last week granted Britain a two-stage "flextension" to Brexit, which had been due to take place on March 29. Under the new plan, if UK lawmakers approve the divorce deal agreed between Britain and the bloc, the country will leave on May 22.

If they defeat it, Britain has until April 12 to tell the EU what it plans to do next: leave without a deal, risking economic chaos, or seek a long delay to Brexit and chart a course toward a softer exit or even remaining in the bloc.

The battle now shifts back to the British Parliament, which is split down the middle between supporters and opponents of Brexit.

Both sides voted in large numbers, twice, to reject May's Brexit deal. But May wants to try again. She hopes to persuade reluctant pro-Brexit lawmakers that backing her deal is their only hope of leaving soon and in an orderly fashion, and to convince pro-EU legislators that they must choose between her deal and a chaotic no-deal Brexit.

May's plan was complicated last week when the speaker of the House of Commons said the prime minister couldn't seek a third vote on her twice-defeated divorce deal unless it was substantially altered.

May is likely to argue that the EU's extension means circumstances have changed and that ruling should no longer apply.

THE END OF MAY?

British politicians are divided over Brexit, but they agree that the process is in a mess — and many blame May, who has refused to consider alternatives to her deal and failed to win changes to the agreement from the EU.

Many Conservatives are now calling for May to step down. Some pro-Brexit Tories who have so far opposed her deal say they would support it if she promised to hand over the next stage of negotiations — when Britain and the EU will hammer out their future relations — to a new leader.

For now, May is standing firm. Under Conservative rules, May cannot face a formal leadership challenge from within her own party until December because she survived one three months ago.

There is little evidence yet that lawmakers' opinion has shifted strongly in favor of May's deal.

Anti-EU supporters of "hard Brexit" still believe that rejecting it can lead to a no-deal departure from the bloc as soon as April 12.

The Brexiteers are in a minority, but form a powerful bloc in May's Conservative Party. A larger group in Parliament, from a range of parties, favors a compromise Brexit in which the UK keeps close economic ties with the bloc.

These pro-EU lawmakers will try to push through a plan this week that would give members of Parliament control of the House of Commons timetable in order to hold a series of votes on alternative forms of Brexit, to see if there is a majority for any of them.

Proposals could include seeking closer ties with the bloc than May's deal envisages, or putting the Brexit deal to a public vote.

Opposition politicians think the only way forward is an early election that could rearrange Parliament and break the political deadlock. May has ruled that out, but could come to see it as her only option.

And anti-Brexit campaigners haven't abandoned the idea of a new referendum on remaining in the EU. There's currently no majority for that in Parliament, but pro-referendum campaigners feel opinion is shifting in their favor. Hundreds of thousands of people marched through London on Saturday to demand a new public vote.

The "nuclear option" of simply canceling Brexit is also gaining support. An online petition urging the government to revoke the decision to leave the EU has amassed more than 5 million signatures.