WORLD What will Boris Johnson do? UK leader to unveil policy plans

What will Boris Johnson do? UK leader to unveil policy plans 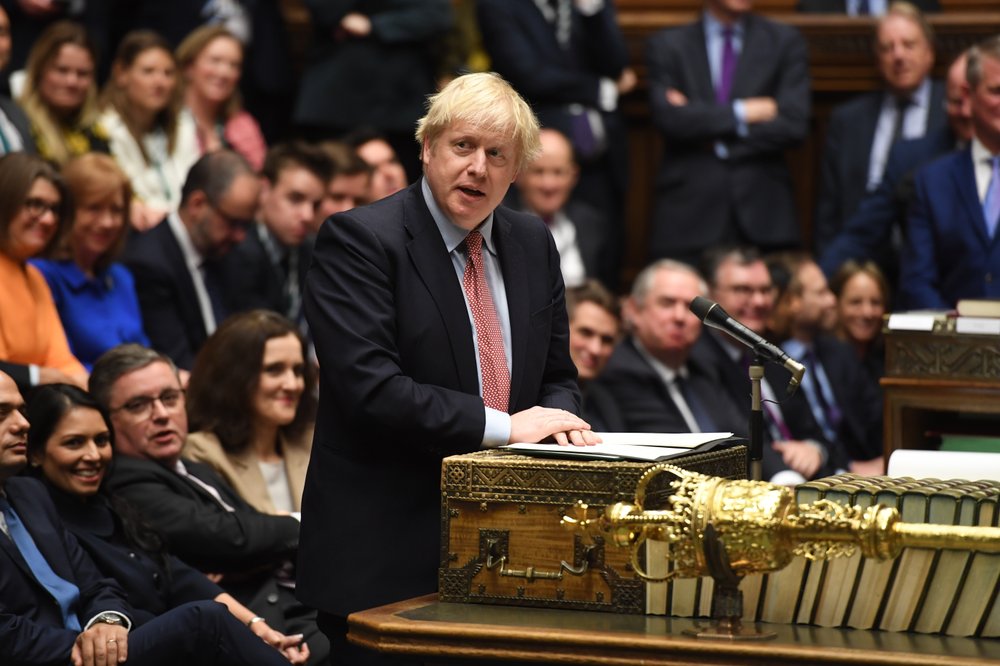 In this photo released by the House of Commons, Britain's Prime Minister Boris Johnson speaks to the house on the first day of the new Parliament, in London, Tuesday, Dec. 17, 2019. (Photo:  AP)

British voters have given Prime Minister Boris Johnson a commanding majority. But they have little idea what he plans to do with it, apart from taking the UK out of the European Union.

Johnson won last week’s election with a pledge to “get Brexit done” by leaving the EU on Jan. 31, and a broad promise to end years of austerity in public spending.

Now Britain’s Conservative prime minister has to turn his vague election pledges into political reality. That will start Thursday, when Johnson’s government announces its legislative plans for the coming year in a speech read out in Parliament by Queen Elizabeth II.

Anand Menon, director of the political think-tank UK in a Changing Europe, said with Johnson’s 80-strong majority in the 650-seat House of Commons, he can govern however he wants.

“But what we don’t know is what he wants,” Menon said Wednesday. “We’ve just had a so-called ‘Brexit election’ and yet we’re not entirely certain what kind of Brexit this prime minister wants to deliver.”

The Queen’s Speech — written by the government but read by the monarch from atop a golden throne — will give the British public some idea of what drives Johnson, a politician whose core beliefs remain a mystery, even to his allies.

He sometimes acts like a Donald Trump-style populist — dubbing his administration a “People’s Government” and banning his ministers from attending the elitist World Economic Forum next month in Davos, Switzerland. But he also claims to be a socially liberal “one nation” Tory who welcomes immigration and wants Britain to be a leader in tackling climate change.

It’s unclear which Johnson will be uppermost in Thursday’s speech, which forms part of the ceremony-rich State Opening of Parliament. It usually takes place about once a year, but Britain saw its last state opening just two months ago, soon after Johnson took over as prime minister from Theresa May through a Conservative Party leadership contest and shortly before the early election that returned him to power.

For the queen’s second visit this year, the pomp is being toned down. There will still be officials with titles like Black Rod and lords in ermine-trimmed robes. But the 93-year-old monarch will travel to Parliament in a car, rather than a horse-drawn carriage, and will wear a hat rather than a diamond-studded crown.

A central piece of legislation will be Johnson’s Withdrawal Agreement Bill, the law needed to make Brexit a reality. It must become law before Jan. 31 if Johnson is to stick to his timetable, and the government plans to hold the first significant vote on it Friday.

The bill commits Britain to leaving the EU on Jan. 31 and to concluding trade talks with the bloc by the end of 2020. Johnson insists he won’t agree to any more delays — a vow that has set off alarm bells among businesses, who fear that means the country will face a “no-deal” Brexit at the start of 2021.

Michel Barnier, the EU’s chief Brexit negotiator, said “it won’t be possible … in this limited time, to do everything. But we will do everything we can.”

Thursday’s speech is also set to include a bill to overhaul Britain’s immigration system after Brexit, when EU citizens will lose the automatic right to live and work in the UK.

Beyond Brexit, there’s likely to be a spending boost for the National Health Service, which has struggled to keep up with growing demand during a decade-long funding squeeze by previous Conservative governments.

Johnson loves big infrastructure projects, and in the past has floated everything from a “Boris Island” airport in the River Thames to a bridge between Scotland and Northern Ireland. Improving dire train services in northern England is a more likely priority for his government.

There may also be tough-sounding announcements on law and order. After two people were killed last month in London by an attacker who had served a prison sentence for terrorist crimes, Johnson said he would end early prison releases for serious offenders.

Johnson will make his mark on the government more decisively in the new year. He’s expected to shake up his Cabinet and merge or even eliminate some ministries — all under the guiding eye of chief adviser Dominic Cummings, a self-styled political disruptor.

Johnson will also have to wait to see how Brexit affects the UK economy. A downturn could hamper the government’s plans to spend more on public services.

Tim Bale, professor of politics at Queen Mary University of London, said Conservative prime ministers from Margaret Thatcher to Theresa May all took office promising, like Johnson, to “heal the nation” and tackle social injustice.

Meanwhile, politicians from the opposition Labour Party have begun jostling to become the party’s next leader in the wake of its crushing election defeat. Labour lost 60 seats, securing only 203, as voters rejected its complex Brexit stance and its hard-left leader, Jeremy Corbyn.

“The takeover of the Labour Party by the far left turned it into a glorified protest movement, with cult trimmings, utterly incapable of being a credible government,” Blair said in a speech Wednesday. “The result has brought shame on us. We let our country down.”