DAMASCUS, Dec. 16 (Xinhua) -- It does not matter if it is Salsa, Rumba, or Cha Cha, people on wheelchairs in Damascus have proved their ability of dancing with confidence by which they beat the stereotypes about disabled people. 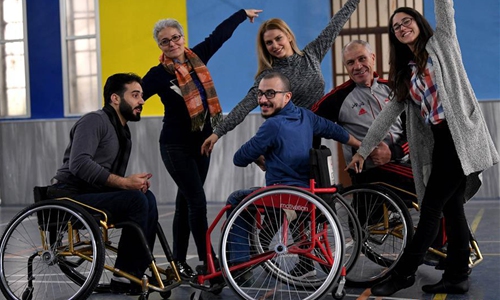 In a rehabilitation center for disabled people in Damascus, a handful of people on wheelchairs took part in a five-day dancing course that was organized by the United Nations Development Program (UNDP), which is the first wheelchair dancing course in the country.

For them, dancing was so out of the question, not because they are discouraged by their situation, but because it was something they have never thought of trying. 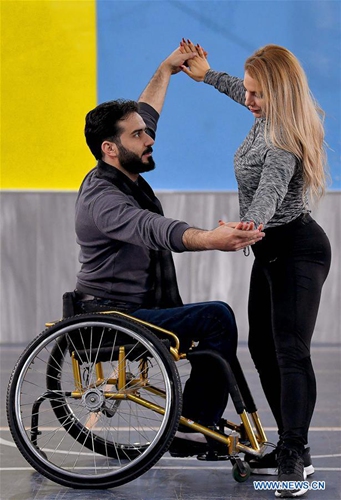 Still, the high determination and their strong will to prove themselves in the society have energized them to take part in the dancing training.

Four people on wheelchairs danced with four dancers on their feet, interacting for the first time and becoming best friends.

For those on wheelchairs, it was a bit challenging at first when they came to the first lesson and met with their dancing partners, who later helped them to learn some ballroom dancing moves with the help of an Italian coach.

It was also challenging for the normal dancers, as they came in with loads of thoughts and questions on how such experience will turn out.

When they came together and held each other's hands for the first dance, all the previously perceived boundaries and limitations were gone. 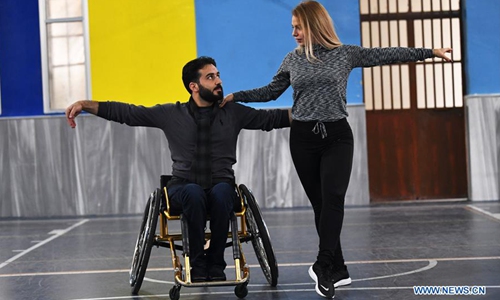 During a visit of Xinhua to the dancing lessons, the four couples were dancing and giggling as if they are lifetime friends, not total strangers who got to know each other five days earlier.

Badr al-Hajani, who is 27 and works as a photographer, was spinning and holding the hand of his partner, Lein al-Kheir, who was also enjoying her dance with him. 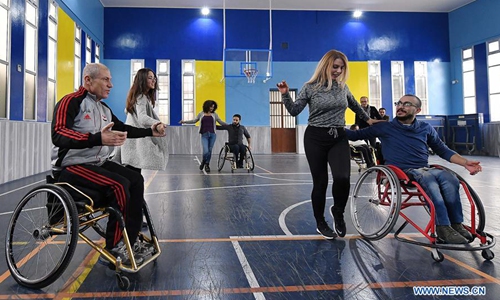 Al-Hajani told Xinhua that he has never imagined that he could dance one day in his wheelchair in a way that has given him lots of positive energy and a sense of accomplishment.

"Dancing has given me a lot of positive additions because it made me feel like someone who is flexible, capable of doing anything and to be able to break all the boundaries in my life," he said.

His partner, al-Kheir, a dancing coach, told Xinhua the experience was amazing as she used to dance with partners on their feet and now she tried a new partner in a wheelchair.

"I feel great as I broke a limitation felt by someone else and this, in particular, was an indescribable feeling. It's great to feel that you have a positive impact on others who are using the wheelchair. We all felt that this experience is so beautiful and we all got happy," she said.

Ahmad Ataya, 50, coaches basketball in his wheelchair and also dances in the positive atmosphere of the music. 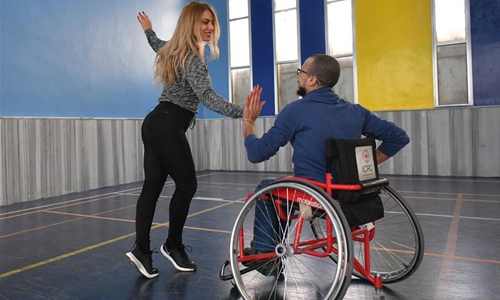 "Me entering the dancing arena is something completely new to me, but it was a very beautiful experience. This is new in Syria and it helped us release negative mood," he said.

Such event has also made it possible for people in wheelchairs to exchange experiences with normal people.

Rita Hamed, a dancer, chose to sit and dance in the wheelchair to provide better understanding of the techniques when training her dancing partner, Samer, who had an accident when he was young.

She held his hands and rolled across the dancing floor in a wheelchair while she was giving her tips on how to better handle her body's movement in the chair.

"The experience widens our horizons and gives us positive energy. It proved to me that I could dance in any circumstance," she said.

Giuseppe Masciello, an Italian coach, said he has got experience in the dances between people in wheelchairs and normal ones back in Europe.

"it so special and beautiful to see two people dancing, one on his feet and another in the wheelchair," he said.

For his side, Loai Falouh, a UNDP official in charge of the activity, told Xinhua that the idea breaks the stereotype and helps people break the boundaries.

"This was challenging but we could come up with a nice group and we got a very good result," he said.

The dancing course is one of several initiatives in the country to help people with disabilities, whose numbers have increased during the more than eight-year war.

According to the statistics by the Humanitarian Needs Assessment Programme, which is a joint UN assessment initiative that tracks displacement and returns movements, a total of 3.7 million or 27 percent of the total population, aged above 12, suffer from disability in Syria.