WORLD When light is lethal: Moroccans struggle with skin disorder

When light is lethal: Moroccans struggle with skin disorder 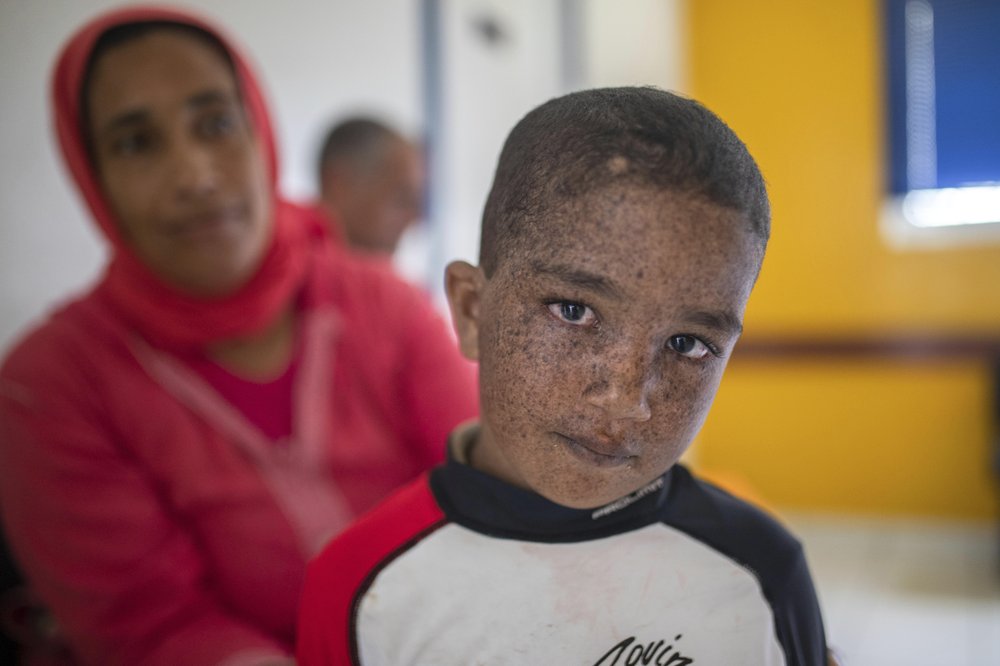 Mohammad, 6, who is affected by a rare disorder called xeroderma pigmentosum, or XP, waits with his mother inside a hospital in Casablanca, Morocco on July 24, 2019. The rare genetic disorder can make the suns rays and other sources of ultraviolet light extremely damaging to the skin and eyes _ and is more common in North Africa than much of the world. (Photo: AP)

Determined for her 7-year-old son to attend school despite a life-threatening sensitivity to sunlight, Nadia El Rami stuck a deal with the school’s director: Mustapha would be allowed in the classroom, but only if he studies inside a cardboard box.

Mustapha Redouane happily accepted the arrangement. He knew his mother’s idea would silence the school’s worries about his condition, a rare genetic disorder called xeroderma pigmentosum,or XP, which can make sun rays and other sources of ultraviolet light extremely damaging to the skin and eyes. The disorder is more common in North Africa than much of the world.

“I hate the sun anyways. It gives me blisters,” he said, sitting on his mother’s lap, his face covered with the dark brown freckles that the school director considered a distraction to other students.

Now 8, Mustapha has already had 11 operations to remove cancerous growths on his skin.

His family is among thousands around the world struggling with XP, and increasingly sharing advice and seeking new treatments. In Morocco, families are also fighting for recognition, government help — and the simple right to go to school.

The disorder affects about 1 in 10,000 people in North Africa — more than 10 times the rate in Europe and about 100 times the rate in the United States, according to Dr. Kenneth Kraemer, who researches XP at the U.S. National Institutes of Health.

Because the disorder is inherited, XP is more common in populations where marriage between relatives is high, Kraemer said. Affected children inherit two copies of a mutated gene, one from each parent. A 2016 Moroccan government study estimates about 15% of marriages are between family members.

Living in a country where the sun shines year-round makes them more susceptible to skin cancers that can be caused by the disorder, said Fatima El Fatouikai, pediatric dermatology specialist at the Ibn Rochd University Hospital in Casablanca.

Without protection, few XP patients in Morocco live beyond their teenage years, El Fatouikai said. It is particularly challenging in developing countries, where an awareness of the disorder and access to treatments are scarce, and in poor, rural communities where people spend more time outside.

Outside of El Fatoikai’s office, families coming from all around Morocco sit in a waiting room eager for their names to be called. There is a rumor about a new XP treatment.

The truth is, she says, “We only have prevention as a possible treatment. These children ... have to avoid even minimum sun exposure.” The main prevention measures: avoiding the sun and wearing protective clothing, face shields and sunscreen.

Fatimazehra Belloucy, 25, has dealt with skin cancer and other problems because of XP.

“If only people made it easier. Their words hurt. I feel entirely alienated,” she said, describing how she faces scared looks and hateful comments as she passes by. Her family limits interactions with her, fearful that the disease is contagious.

“No one would take care of me, so I had to do it myself,” said Belloucy, who received her high school diploma and is now enrolled in university. She hopes to land work helping with the disease.

Most Moroccan children with XP don’t continue their education. While U.S. schools install window filters for XP pupils and otherwise adapt to their needs, such accommodations are rare in Morocco.

“It hurts me that I have to see little kids suffer because of lack of awareness,” says Habib El Ghazaoui, who quit his veterinary job and made it his life’s mission to raise awareness and help children with XP after learning that his daughter Fatimazehra had the disorder.

His daughter, now a young adult raising awareness on social media, has had 50 operations for cancerous growths on her tongue, eyelids and elsewhere. She stays indoors and mostly sleeps during the day but, as the sun sets, she goes to parks and cafes, determined to lead a normal life.

Ghazaoui leads the Association for Solidarity with Children of the Moon from his house in the town of Mohammedia. He juggles his time between visiting families, distributing donations of creams and masks, providing the Casablanca hospital with data and pressuring the government to take action.

XP support groups are increasingly sharing advice online. They held an exceptional meeting in London last year to share “hundreds of practical hints” about hoods, window protections or meters to measure light — and even a French-designed face shield with a fan in it, said NIH researcher Deborah Tamura.

The donations from Ghazaoui’s group reach families like those of Said El Mohamadi, a tailor in the city of Salé, whose 6-year-old daughter has the condition. His family is still debating the topic of school.

“She’s sad, but I can’t risk taking her to school where there isn’t any kind of protection,” he said.

“But she needs an education,” her mother Maria El Maroufi pleads.