LONDON, March 18 (Xinhua) -- With 11 days to go before Britain's planned exit from the Europe Union (EU), Prime Minister Theresa May was dealt a blow on Monday in her quest for a deal with Brussels. 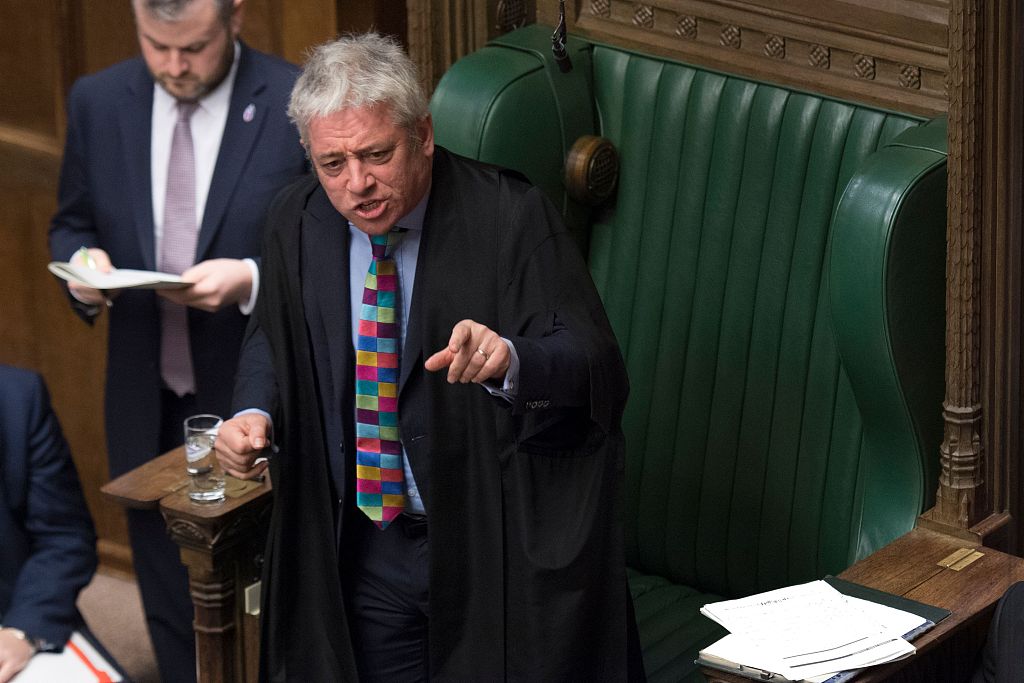 In what one government official described as a constitutional crisis, the Speaker of the House of Commons John Bercow ruled that May's Brexit deal could not have a third vote in Parliament.

Citing parliamentary convention going back centuries, Bercow said only a substantially changed deal could be presented to the members of parliament (MPs).

Despite facing challenges from a number of MPs, Bercow's ruling sticks.

May had hoped to be able to put her deal forward Tuesday or Wednesday of this week ahead of the European Council meeting of leaders of EU member states on Thursday.

A plan had been mapped out that if the deal finally got through the House of Commons after two rejections, she would ask the EU for an extension of the March 29 departure date until June 30 to enable legal processes to be completed.

If MPs had voted against, MPs would have faced the prospect of Britain seeking an extension of possibly several years.

Bercow said a third vote on a Brexit deal would require renegotiation at EU level, and the test of whether May's motion to parliament had substantially changed would be if changes to the deal were made in agreement with Brussels.

The Daily Telegraph in London said the Speaker's intervention was likely to infuriate Downing Street, but in the Commons, his ruling has been welcomed by both sides of the Brexit divide for very different reasons.

"Whilst Remainers believe his decision increases the likelihood of a second referendum, Brexiteers think it brings the UK r to a no deal exit," said the Daily Telegraph.

In one of the first responses to Bercow's ruling, Robert Buckland, the solicitor general, said Britain is in a constitutional crisis.

Buckland said Bercow's ruling would have huge reverberations for the Brexit process, including the possibility of asking Queen Elizabeth to end the parliamentary session.

"Frankly we could have done without this but it is something we are going to have to negotiate and deal with. This actually places an onus on the European Council to come up with some potential solutions that allows the Government to put a new motion down which addresses the concerns expressed," he noted.

Stephen Laws, a former draftsman of parliamentary legislation, has said the Speaker of the Commons speculated that May's government could work around the problem by putting down a new motion insisting on a vote on the deal "notwithstanding the practice of the House (of Commons)."

There had been growing doubt that May would put forward a vote on her deal this week in any case.

Her senior ministers had spent the weekend on a charm offensive to seek support from Conservative MPs and the crucial support of the Democratic Unionist Party (DUP) to change their minds.

Senior ministers, including Chancellor Philip Hammond, said there would only be a third vote on the deal unless the government was reasonably certain of success.

On its first outing in the commons, the deal was rejected by 230 votes, the biggest defeat in British political history. In the second vote last week it was beaten by a smaller margin of 149 votes.

May is due to take part in the European Council meeting on Thursday when she plans to ask for Brexit to be delayed.

May is now expected to write to European Council President Donald Tusk seeking an extension of Article 50, the process that set Britain's original departure date of March 29.