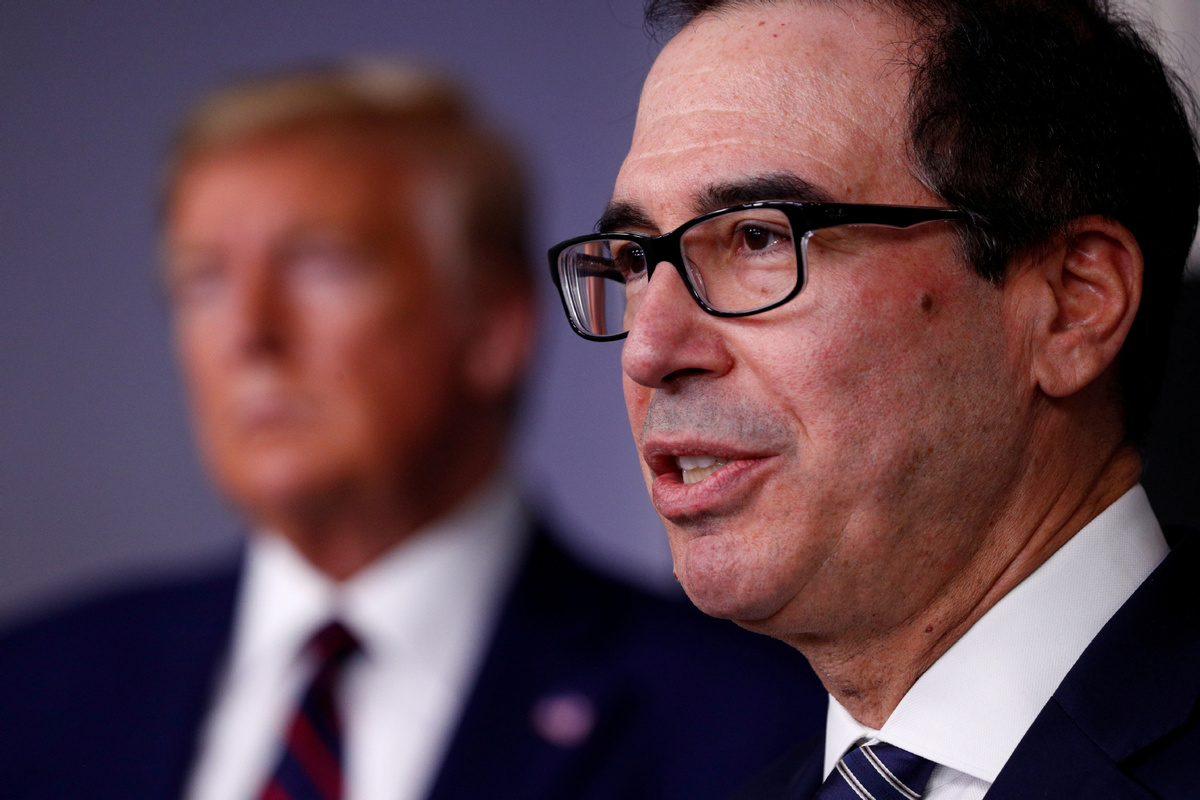 While expressing optimism that the economy will improve later this year, White House officials are involved in informal talks with Congress to approve another round of coronavirus relief legislation, officials said Sunday.

Officials in the Trump administration, including Mnuchin and White House economic adviser Larry Kudlow, said they were holding discussions with lawmakers on issues including potential aid to states whose finances have been devastated by the pandemic.

Also, Vice-President Mike Pence, after one of his close aides tested positive for the coronavirus last week, is not in quarantine but is putting "a little distance" between himself and others, officials said Sunday.

"Vice-President Pence will continue to follow the advice of the White House Medical Unit and is not in quarantine," his spokesperson Devin O'Malley said Sunday.

"Additionally, Vice-President Pence has tested negative every single day and plans to be at the White House tomorrow."

Before he left Washington for a day trip to Iowa on Friday, Pence was informed that his spokeswoman Katie Miller had tested positive for the virus. President Donald Trump's valet also tested positive last week.

Pence, who leads the government's coronavirus response, was active on Twitter on Sunday, with the posts mostly pertaining to Mother's Day.

Three other key members of the White House Coronavirus Task Force went into a two-week quarantine Saturday after fears of possible coronavirus exposure.

The three are Dr Anthony Fauci, director of the National Institute of Allergy and Infectious Diseases; Dr Robert Redfield, director of the Centers for Disease Control and Prevention; and Dr Stephen Hahn, commissioner of the Food and Drug Administration.

None of the three officials have tested positive for the virus. 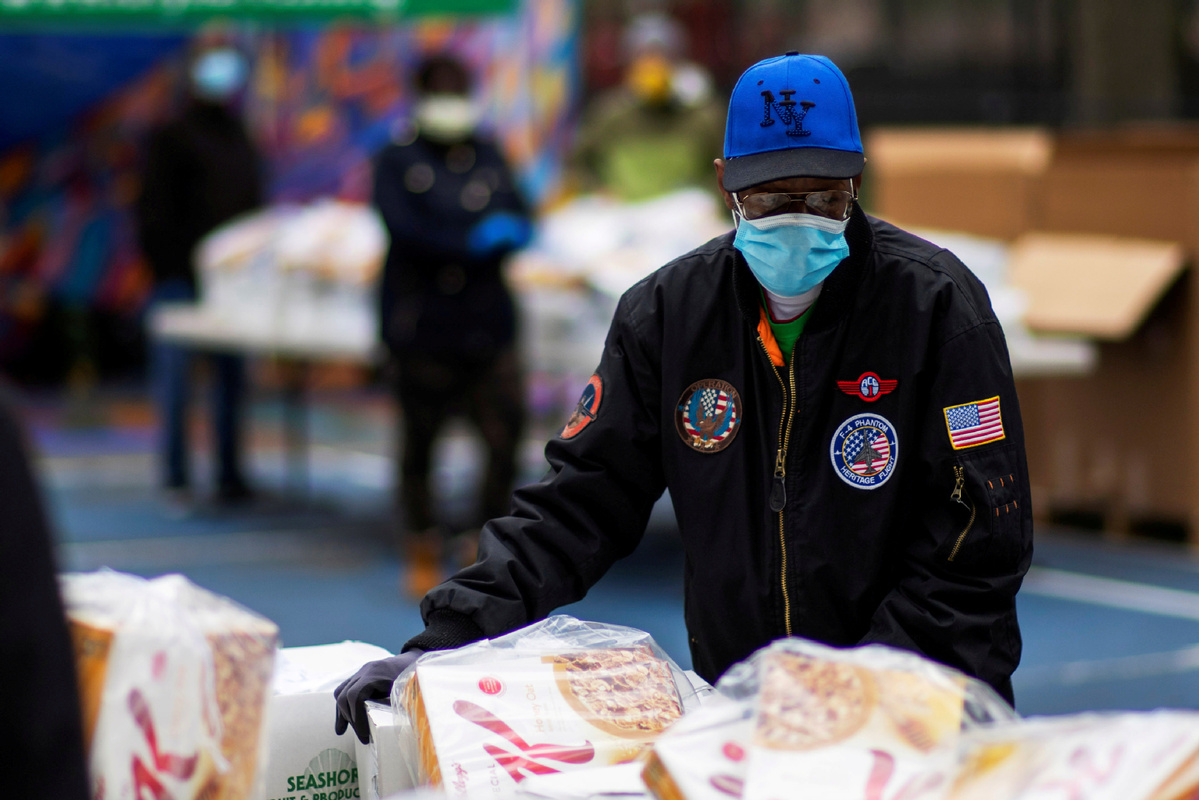 A person organizes food donated by City Harvest Mobile Market Food Distribution Center, during the outbreak of the coronavirus disease (COVID-19) in the Brooklyn borough of New York, US, April 15, 2020. (Photo: Agencies)

As of Sunday evening, the US had recorded 79,500 deaths in the outbreak, with the number of confirmed cases surging past 1.32 million.

Trump said Friday that he's "in no rush" to negotiate another stimulus package, as the Labor Department reported that unemployment rose to 14.7 percent in April, the worst figure since the Great Depression.

Over the past two months, the White House and bipartisan coalitions in Congress have approved $3 trillion in spending to help companies, workers and the unemployed.

House Speaker Nancy Pelosi has said she intends to introduce a new "big and bold" $2 trillion spending bill as soon as this week that would include $500 billion in aid to state and local governments, more coronavirus testing, $25 billion for the Postal Service, and up to $300 billion to prevent widespread layoffs of front-line workers.

"We just want to make sure that before we jump back in and spend another few trillion of taxpayers' money, that we do it carefully," Mnuchin said on Fox. "We've been very clear that we're not going to do things just to bail out states that were poorly managed."

Kudlow, speaking on ABC's This Week, said: "I think that many people would like to just pause for a moment and take a look at the economic impact of this massive assistance program, which is the greatest in United States history. That's all that is being said. … It's not that we're not talking. We are. It's just informal at this stage."

Pressure for further action may intensify as the near-term economic picture worsens. On CBS' Face the Nation, White House economic adviser Kevin Hassett said the US unemployment rate could rise to somewhere "north of 20 percent" in May or June before the economy moves into what administration officials have said will be a robust recovery in late 2020.

On Sunday, New York state announced new protections for residents of nursing homes, which have accounted for a large percentage of the nearly 80,000 US coronavirus deaths recorded so far.

At least 335,000 of the US' total cases are in New York state, resulting in more than 26,000 deaths, according to Johns Hopkins University.

Governor Andrew Cuomo ordered that all nursing home staff be tested at least twice a week for the coronavirus and that hospitals may not discharge any COVID-19 patient to a nursing home until the patient tests negative.

If a nursing home cannot provide proper care, the patient must be transferred to the state, which the governor said has ample hospital beds available.

"Our number one priority is protecting people in nursing homes," Cuomo said. "It's where it (COVID-19) feeds."

Musk threatened to move his company's headquarters and future programs to Texas or Nevada.

In a blog post Saturday, Tesla said the county's position left it no choice but to take legal action to ensure its employees can go back to work.

The company said it had worked out a thorough return-to-work plan that includes online video training for personnel, work-zone partitions, temperature-screening, requirements to wear protective equipment, and cleaning and disinfecting protocols.

Tesla filed a lawsuit against the county in US District Court in San Francisco on Saturday, calling the continued restrictions a "power-grab" by the county because the governor had said Thursday that manufacturers in the state would be allowed to reopen.