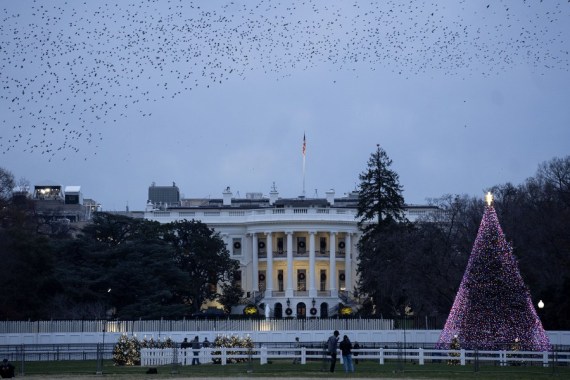 WASHINGTON, Dec. 4 (Xinhua) -- The White House's plan to hold a series of holiday parties at the presidential mansion has drawn ire as COVID-19 cases are surging across the country and public health officials have urged Americans to forgo large in-person gatherings.

President Donald Trump and First Lady Melania Trump, who "are determined to have a final holiday season" in the White House, are planning at least 25 separate holiday parties over the coming weeks, and each of which will include more than 50 guests, according to a report by The Washington Post on Tuesday.

"Health officials have repeatedly warned the White House against hosting indoor events, but they have resigned themselves to the fact that Trump and his aides will ultimately do what they want," said the report.

The White House plans to "celebrate Christmas and Hanukkah while providing the safest environment possible," Stephanie Grisham, a spokeswoman for the first lady, said Wednesday, adding that safety measures to be in place include smaller guest lists, mask requirements and social distancing.

However, photos from an event held Tuesday night at the White House showed a crowded party with no social distancing and a number of guests without masks.

"What's worse, gatherings like these will reportedly be happening as often as twice a day for the next few weeks. It's easily the Trumps' most cursed Christmas yet," Lampen added.

The White House's decision to go ahead with holiday parties came as the country's top public health officials have warned of the dangers of indoor gatherings over the coming months.

"The reality is December and January and February are going to be rough times," Robert Redfield, director of the Centers for Disease Control and Prevention (CDC) said Wednesday during a U.S. Chamber of Commerce event.

"I actually believe they're going to be the most difficult time in the public health history of this nation," said Redfield.

The United States has recorded more than 14.3 million cases with over 278,000 related deaths as of Friday evening, according to the real-time count kept by Johns Hopkins University.

An updated model forecast by the Institute for Health Metrics and Evaluation at the University of Washington on Friday morning projected 538,893 COVID-19 deaths in the United States by April 1, 2021.

Daily deaths in the last week increased to an average of 1,660 per day, up from 1,470 the previous week, the institute said in its COVID-19 results briefing on Friday.

From California to Kansas, Massachusetts to Florida, and everywhere in-between, doctors, nurses, funeral home directors and food bank organizers are "bracing for a devastating season," a CNN report said Friday.

"They're already stretched thin and exhausted after months of confronting the deadly COVID-19 pandemic, but they fear the worst is still yet to come," the report added.

During the pandemic, the White House has failed to lead responsibly by hosting multiple large gatherings inside the presidential residence despite warnings from infectious disease experts and media networks.

On Sept. 26, the White House held a Rose Garden gathering, where Trump announced his decision to nominate conservative appellate judge Amy Coney Barrett for the Supreme Court. More than 100 attendees sat close to each other at the event, and only a small number of them wore masks.

On Oct. 1, Trump tested positive for COVID-19 and was later admitted to a military hospital, where he stayed for treatment, before returning to the White House.

In an interview with CBS News Radio on Oct. 9, Anthony Fauci, director of the U.S. National Institute of Allergy and Infectious Diseases, called the White House cluster "a super-spreader event."

A second large outbreak at the White House occurred after Election Day when a watch party with some 200 attendees inside the East Room was hosted.