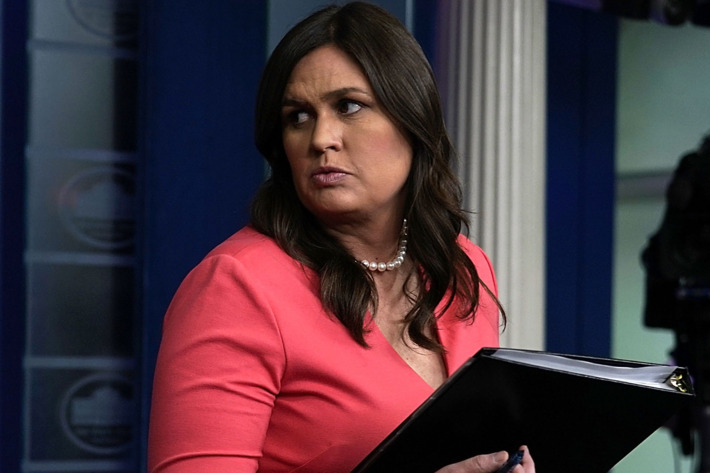 White House press secretary Sarah Huckabee Sanders was booted from a Virginia restaurant because she works for President Donald Trump, the latest administration official to experience a brusque reception in a public setting.

Sanders tweeted that she was told by the owner of the Red Hen in Lexington, Virginia, that she had to “leave because I work for @POTUS and I politely left.” She said the episode Friday evening said far more about the owner of the restaurant than it did about her.

“I always do my best to treat people, including those I disagree with, respectfully and will continue to do so,” Sanders said in the tweet from her official account, which generated 22,000 replies in about an hour.

The restaurant’s co-owner Stephanie Wilkinson told The Washington Post that her staff had called her to report Sanders was in the restaurant. She cited several reasons, including the concerns of several restaurant employees who were gay and knew Sanders had defended Trump’s desire to bar transgender people from the military.

“Tell me what you want me to do. I can ask her to leave,” Wilkinson told her staff, she said. “They said yes.”

Wilkinson said that she talked to Sanders privately and that Sanders’s response was immediate: “That’s fine. I’ll go.”

Employees at the restaurant told The Associated Press that Wilkinson wasn’t available for further comment.

Lexington, located in the Shenandoah Valley and a three-hour drive from the nation’s capital, is politically a spot of blue in a sea of red. It sided with Democratic nominee Hillary Clinton in the 2016 presidential election, by a 2-1 margin. It’s the county seat of Rockbridge County, which went with Trump by a similar margin. And it is home to Virginia Military Institute and Washington and Lee University.

Sanders’ treatment at the restaurant created a social media commotion with people on both sides weighing in, including her father, Mike Huckabee, a former Arkansas governor and Republican presidential candidate.

“Bigotry. On the menu at Red Hen Restaurant in Lexington VA. Or you can ask for the ‘Hate Plate,’” Huckabee said in a tweet, quickly generating 2,000 replies in about 30 minutes. “And appetizers are ‘small plates for small minds.’”

On Yelp, a responder from Los Angeles wrote: “Don’t eat here if you’re a Republican, wearing a MAGA hat or a patriot.”

But many were also supportive of the restaurant owner’s actions.

“12/10 would recommend. Bonus: this place is run by management who stuck up for their beliefs and who are true Americans. THANK YOU!!!!” said a comment from Commerce City, Colorado.

Tom Lomax, a local business owner, brought flowers to the restaurant Saturday afternoon as a show of support. He called Wilkinson a “force of nature” and “one of the biggest drivers of the downtown.”

“We support our own here, great little community we have,” he said.

Brian Tayback, of Shrewsbury, Pennsylvania, and Brandon Hintze, of Alexandria, Virginia, walked by the restaurant during a visit. Tayback said he believes the owner made the right decision.

Dave Kurtz, who lives near the Red Hen, came to the restaurant wearing a T-shirt supporting the president that says: “Get on board or get run over.”

“I want to see why they would do that,” Kurtz said, adding he had planned to eat at the restaurant but doubts he will now. “She’s a paying customer. She’s just coming in here to have dinner.”

The separation of families trying to enter the U.S. at the southern border has intensified political differences and passions that were already at elevated levels during the Trump presidency.

Earlier in the week, Trump’s Homeland Security secretary, Kirstjen Nielsen, cut short a working dinner at a Mexican restaurant in Washington after protesters shouted, “Shame!” until she left. A few days earlier, Trump aide Stephen Miller, a key adviser on immigration, was accosted by someone at a different Mexican restaurant in the city, who called him “a fascist,” according to the New York Post.

The Trumps don’t get out a lot socially in Washington and Trump often dines at BLT Prime in the Trump International Hotel or at Trump properties elsewhere when he does go out. He’s talked about getting out more, but some have questioned whether he would be welcome at some establishments in the city.

Ari Fleischer, who was a press secretary for President George W. Bush, tweeted Saturday: “I guess we’re heading into an America with Democrat-only restaurants, which will lead to Republican-only restaurants. Do the fools who threw Sarah out, and the people who cheer them on, really want us to be that kind of country?”