With deaths mounting at the nation's nursing homes, the White House strongly recommended to governors Monday that all residents and staff at such facilities be tested for the coronavirus in the next two weeks. 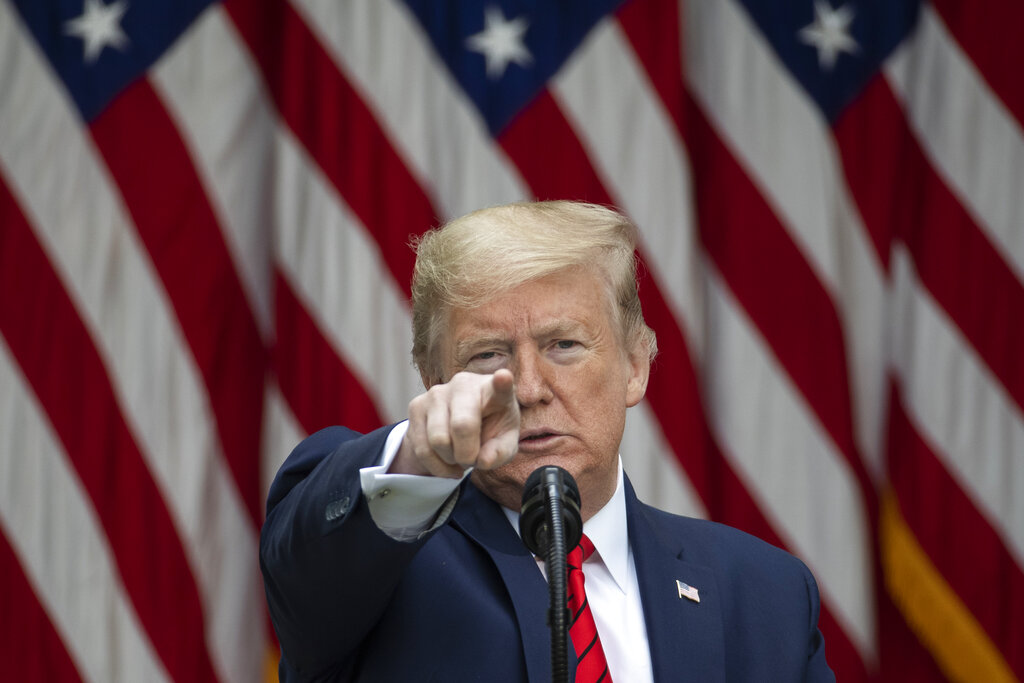 US President Donald Trump points to a question as he speaks about the coronavirus during a press briefing in the Rose Garden of the White House, Monday, May 11, 2020, in Washington. (Photo: AP Photo)

Why the government is not ordering testing at the nation's more than 15,000 nursing homes was unclear. Nor was it clear why it is being recommended now, more than two months after the nation's first major outbreak at a nursing home outside of Seattle that eventually killed 45 people.

“We really believe that all 1 million nursing home residents need to be tested within next two weeks as well as the staff,” added Dr. Deborah Birx, the task force coordinator, according to a recording of the call obtained by The Associated Press.

President Trump has repeatedly said there have been plenty of testing kits and has shifted blame to governors for reacting too slowly on testing, a charge he repeated in a Rose Garden news conference later Monday.

“Frankly, some of the governors were very lax with respect to nursing homes. It was obvious right from the beginning," Trump said, referring to the Washington state outbreak.

Asked why testing was recommended, not ordered, Trump said: “I would certainly consider that. I will mandate it if you'd like."

More than 27,000 residents and staff have died from outbreaks of the virus at the nation's nursing homes and long-term care facilities, according to an AP tally based on state health departments and media reports. That is about a third of all 80,000 deaths in the U.S. that have been attributed to the virus.

Nursing home operators have said the lack of testing kits has left them nearly powerless to stop the virus from entering their facilities because they haven't been able to identity silent spreaders not showing symptoms.

The American Health Care Association, the main nursing home trade group, welcomed the new testing recommendation but said the federal government needed to do more to make that possible, including allocating billions of additional dollars to the effort.

Charlene Harrington, a professor emeritus of nursing at the University of California, San Francisco, said nursing homes should have been prioritized from the start given their vulnerable populations and questioned why the testing recommendation is only happening now.

“We’re two months into it," she said. “If they had done that to begin with, we would’ve picked up cases early and we wouldn’t have so many deaths.”

Representatives for the federal Centers for Medicare & Medicaid Services did not immediately respond when asked why the agency wasn’t making testing a requirement. In mid-March, it asked homes to cease group gatherings and visitations, and to screen staff with such measures as temperature checks.

A senior administration official said taking a tougher stand is still an option.

“If the states aren’t able to come back with plans quickly to do it, then there’s a good chance we will order them to do that, but we believe that right now there are plenty of tests out there,” the official said on condition of anonymity because he lacked authorization to speak to the media.

West Virginia and Texas have already mandated testing for all nursing home residents and staff. And just Sunday, New York, the nation's leader in nursing home deaths, began requiring all staff to be tested twice a week.

Ohio Republican Gov. Mike DeWine said his state was ramping up testing but cast doubt on the feasibility of doing that for everyone in every home.

“I don’t know that that’s going to get done,” said DeWine, whose state has reported nearly 500 deaths in long-term care facilities in three weeks. He added, “There’s frankly a lot of people in the medical field who would argue that the testing of everybody in that nursing home might not be the best protocol.”

Pence led the White House’s weekly call with governors from an isolated room after his press secretary tested positive Friday. Three of the country's top health care officials, including infection disease expert Dr. Anthony Fauci, are quarantining themselves on fears they have been exposed to the virus, too.