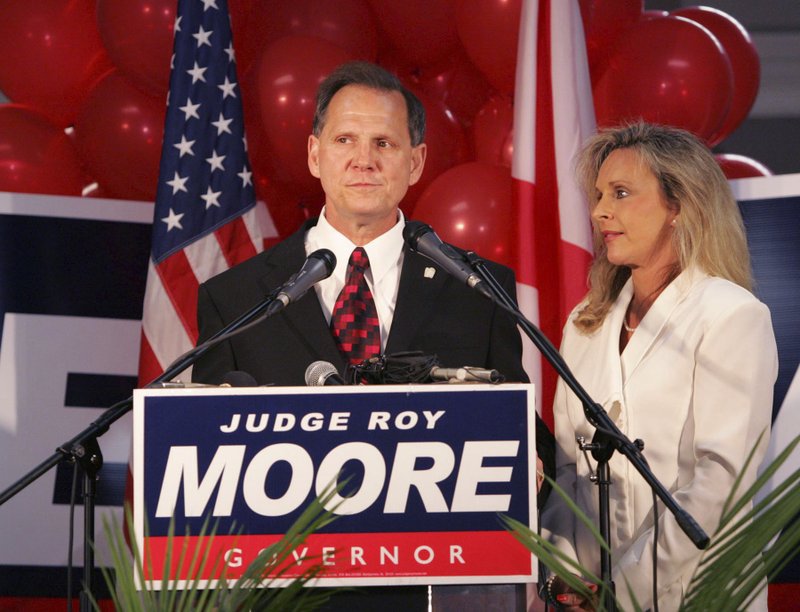 Sanders says, “Obviously, the president wants people both in the House and the Senate who support his agenda.”

Many national Republicans have called on Moore to step aside in the wake of multiple sexual assault and harassment allegations. Trump has not followed suit, but through spokespeople has called the allegations troubling.

Sanders says, “We feel like the people of Alabama should make the determination on who their next senator should be.”

Leigh Corfman says she was “absolutely not” paid to speak publicly now about her sexual encounter with Alabama Senate candidate Roy Moore when she was 14.

Corfman was the first woman to publicly accuse Moore of sexual misconduct since his GOP nomination to Alabama’s U.S. Senate seat. Moore has denied the allegations.

Corfman tells NBC’s “Today Show” Monday that she decided against going public previously because she was afraid that her children would be shunned in Alabama, where Moore became a state judge.

Corfman says she agreed to share details only after The Washington Post sought her out and gave her assurances she wasn’t the only one accusing Moore of misconduct. She tells NBC, “my bank account has not flourished. If anything it’s gone down because I’m not working.”

White House counselor Kellyanne Conway is attacking the Democrat running in the Alabama Senate race against Republican Roy Moore. The special election has been rocked by sexual misconduct allegations against Moore.

Conway lashed out against Doug Jones during a Monday appearance on “Fox & Friends.” She says Jones would “be vote against tax cuts,” calling him a “doctrinaire liberal.”

Moore has denied allegations that he sexually assaulted teenage girls when he was in his 30s.

White House aides have said President Donald Trump doesn’t know who to believe, but isn’t campaigning for Moore because of “discomfort” with the claims.

Asked if she was encouraging people to vote for Moore, Conway avoided the question, saying: “I’m telling you that we want the votes in the Senate to get this tax bill through.”

But he isn’t calling on the controversial judge to drop out of the race because aides say he thinks the state’s voters should decide. Ultimately, aides say Trump doesn’t know who to believe following decades-old allegations made one month before the Dec. 12 election.

White House legislative director Marc Short, said: “Obviously if he did not believe that the women’s accusations were credible, he would be down campaigning for Roy Moore.” Still, Short added the “38-year-old allegations” were virtually unprovable.