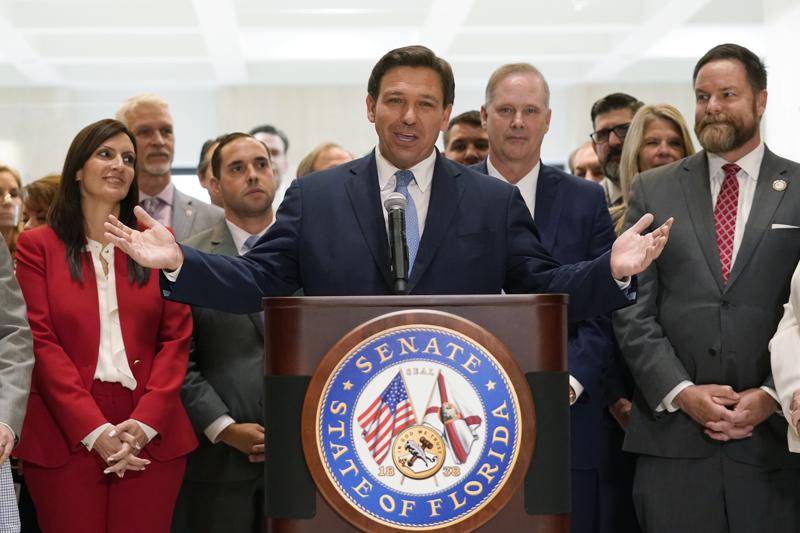 Surrounded by lawmakers, Florida Gov.Ron DeSantis speaks at the end of a legislative session, Friday, April 30, 2021, at the Capitol in Tallahassee, Fla. (Photo: AP)

WASHINGTON, May 6 (Xinhua) -- The White House on Thursday slammed the state of Florida after its governor signed into law a bill that will make it more difficult for certain Floridians to vote.

"The 2020 election was one of the most secure elections in American history. There's no legitimate reason to change the rules right now to make it harder to vote. That's built on a lie," deputy press secretary Karine Jean-Pierre told reporters aboard Air Force One.

"Florida is moving in the wrong direction," Jean-Pierre said.

Jean-Pierre reiterated the White House's support for the House-passed legislation, H.R. 1, that would expand access to mail-in ballots, early voting and automatic registration, among other provisions. The bill is unlikely to pass in the Senate.

Florida Governor Ron DeSantis earlier Thursday signed the state's new voting legislation into law. The new law, Senate Bill 90, will restrict the use of absentee ballot drop boxes, implement additional requirements for voters to sign up for mail-in ballots, impose additional voter identification rules, prohibit volunteers and organizations from returning ballots on behalf of voters, and ban counties from accepting grants or private funds to pay for election-related expenses, among other restrictive measures that Florida Republicans said would provide "guardrails" to prevent anyone from "gaming the system" in the future.

DeSantis said during the signing ceremony that "Floridians can rest assured that their votes count and that Florida will continue to conduct elections that are efficient, transparent and secure."

The law, however, met with immediate lawsuits from rights groups, challenging several provisions in the law while condemning it as a new voter suppression effort.

The Sunshine State's legislation is part of the Republican-led effort to restrict voting access nationwide in the wake of record turnout in the 2020 elections and former President Donald Trump's unsubstantiated claims that last year's presidential election was marred by widespread voter fraud and was stolen from him.

A tally by the left-leaning Brennan Center for Justice at New York University found that 361 bills with provisions that restrict voting had been introduced in 47 states as of March 24.