White House tells FBI it can talk to anyone about Kavanaugh 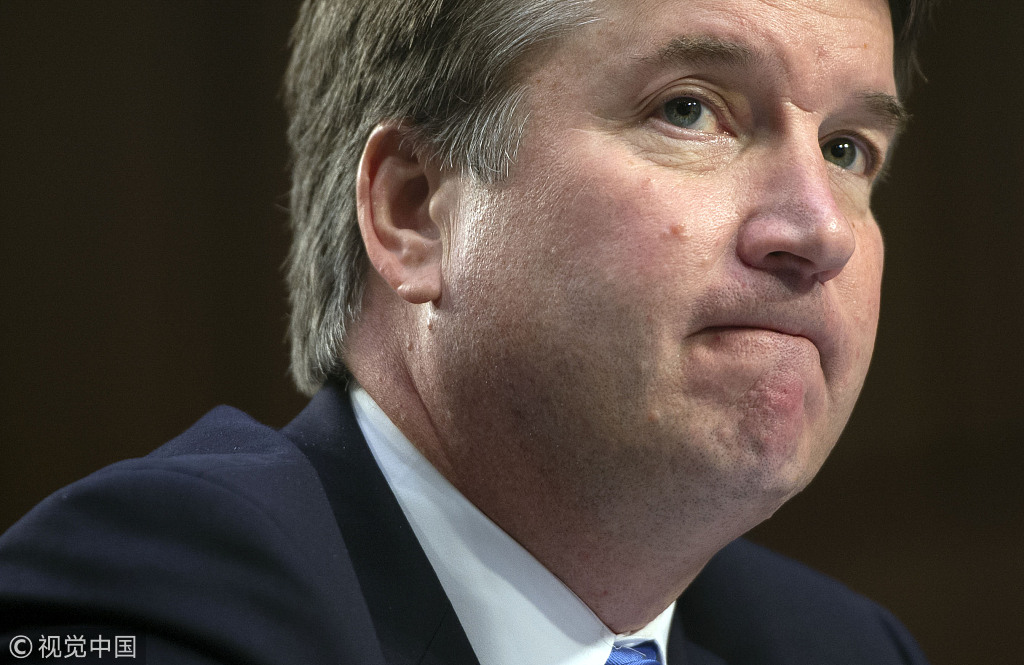 The White House has given the FBI clearance to interview anyone it wants to by Friday in its investigation of sexual misconduct allegations against Supreme Court nominee Brett Kavanaugh.

The new guidance, described to The Associated Press by a person familiar with it, was issued to the FBI over the weekend in response to Democratic and news media pushback that the scope of the probe was too narrow.

It comes as the FBI presses ahead with its investigation, questioning in recent days at least four people about accusations of misconduct against Kavanaugh dating to when he was in high school and college. Among the witnesses interviewed were men who California college professor Christine Blasey Ford says were present at a party of teenagers in the early 1980s at which she says she was sexually assaulted by Kavanaugh.

President Donald Trump, addressing concerns about the probe's expansiveness at a news conference Monday, said he wants the FBI to do a "comprehensive" investigation and "it wouldn't bother me at all" if agents pursued accusations made by three women who have come forward. But he also said Senate Republicans are determining the parameters of the investigation and "ultimately, they're making the judgment."

"My White House will do whatever the senators want," Trump said. "The one thing I want is speed."

The White House instructed the FBI to interview anyone it deems relevant to the inquiry, but required the work to be done by Friday, according to the person familiar with the discussions, who spoke on condition of anonymity to discuss private conversations.

The revised guidance was aimed at promoting an investigation that could tamp down Democratic criticism and satisfy on-the-fence Republicans about its thoroughness and fairness while also ensuring a fixed deadline to prevent the probe from becoming open-ended and spanning weeks. Officials said it was possible, but not likely, the bureau could complete its work before Friday.

Trump said a comprehensive investigation is "a good thing" for Kavanaugh and that while it was fine that the FBI wants to interview all three women who have made accusations, "we don't want to go on a witch hunt, do we?"

Sen. Susan Collins of Maine — one of three Republican senators who was instrumental last week in holding up Kavanaugh's confirmation vote — said she had extensive conversation with the White House counsel's office and is "confident that the FBI is doing a thorough investigation and that it will be helpful to us as we make our decisions."

As Republicans and Democrats quarreled over whether the FBI would have enough time and freedom to conduct a thorough investigation before a vote on the nomination, FBI agents have been interviewing multiple witnesses from Kavanaugh's high school and college years.

They include Mark Judge, a high school friend of Kavanaugh's who Ford has said was in the room when a drunken Kavanaugh sexually assaulted her. Judge has denied misconduct allegations. On Monday, his lawyer Barbara "Biz" Van Gelder said Judge had been interviewed "but his interview has not been completed." She declined to elaborate.

Another witness, Patrick "P.J." Smyth, answered "every question" he was asked and told agents he had "no knowledge" of the small gathering that Ford described, according to his attorney, Eric Bruce. Smyth also told the FBI he doesn't have "knowledge of Ford's allegations of improper conduct against Kavanaugh," Bruce said.

Ford has said Smyth, whom she remembered as "P.J.," was downstairs, not anywhere near the event.

The FBI has also interviewed Leland Keyser, who Ford said attended the same party. Keyser's attorney, Howard Walsh, said she was questioned by FBI agents Saturday, but he didn't provide any additional details about the interview.

Ford shared her allegation at an extraordinary congressional hearing last week that also included Kavanaugh's angry and emotional denial. As of Monday afternoon, she had not been contacted by the FBI to schedule an interview, according to a person close to her.

The FBI interviewed a separate accuser over the weekend — Deborah Ramirez, who has said Kavanaugh exposed himself to her when both were students at Yale University in the 1980s. Ramirez also provided investigators with the names of others who she said could corroborate her account, according to a person familiar with her questioning.

Kavanaugh has denied that allegation.

Since Trump, under pressure from three undecided Republicans, ordered the FBI to reopen Kavanaugh's background check Friday, the White House has scrambled to defend the process from Democratic complaints that certain witnesses were being kept off-limits.

Officials insisted that they were not "micromanaging" the new one-week review of Kavanaugh's background and insisted that Republican senators were dictating the inquiry's scope.

But questions about the investigation's expansiveness mounted as additional witnesses came forward with accounts they wanted to present to the FBI about Kavanaugh's behavior.

In a statement Sunday, a Yale classmate of Kavanaugh's said he is "deeply troubled by what has been a blatant mischaracterization by Brett himself of his drinking at Yale." Charles "Chad" Ludington, who now teaches at North Carolina State University, said he was a friend of Kavanaugh's at Yale and said Kavanaugh was "a frequent drinker, and a heavy drinker."

While saying that youthful drinking should not condemn a person for life, Ludington said he was concerned about Kavanaugh's statements under oath before the Senate Judiciary Committee.

A third woman, Julie Swetnick, accused Kavanaugh and his friend Mark Judge of excessive drinking and inappropriate treatment of women in the early 1980s, among other accusations. Kavanaugh has called her accusations a "joke." Judge "categorically" denies the allegations.

Swetnick's attorney, Michael Avenatti, said Monday that his client was willing to cooperate with the FBI but has not been contacted.

As the fresh review unfolded, the prosecutor brought in by Republicans to question Ford at last week's hearing outlined in a memo why she did not believe criminal charges would be brought against Kavanaugh if it were a criminal case rather than a Supreme Court confirmation process.

Rachel Mitchell argued that that there were inconsistencies in Ford's narrative and said no one has corroborated Ford's account. Ford was not questioned as part of a criminal proceeding but in the confirmation process.