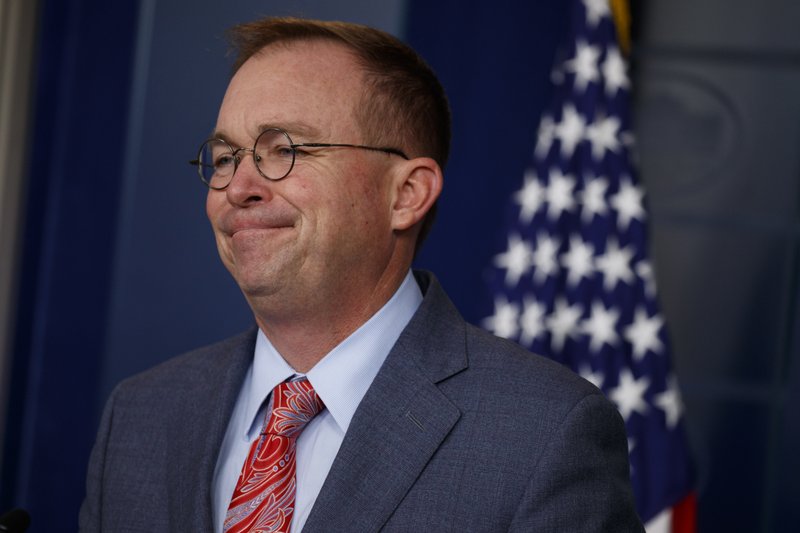 The White House acknowledged that President Donald Trump’s decision to hold up military aid to Ukraine was linked to his demand that Kyiv investigate the Democratic National Committee and the 2016 US presidential campaign, a shifting new explanation about events at the heart of the impeachment inquiry.

The admission from acting chief of staff Mick Mulvaney on Thursday undercut the president’s position that there was no quid pro quo during Trump’s phone call with the Ukraine president that sparked the House investigation.

The sudden turn of events had immediate fallout. Trump’s lawyer distanced the Republican president from Mulvaney’s account. The Justice Department said the explanation was news to them. And Democrats cast Mulvaney’s remarks as further evidence of wrongdoing as Trump sought a “favor” from Ukraine.

Trump, traveling in Texas, appeared to stand by his top aide, calling Mulvaney a “good man.”

“I have a lot of confidence” in him, Trump said.

But Mulvaney’s initial remarks, made during a rare appearance by an administration official in the White House briefing room, spun open a new phase of the impeachment inquiry.

He indicated that a quid pro quo was at play for the military aid — but a different one than Democrats initially highlighted as they probed Trump’s efforts to have Ukraine investigate a company linked to the son of his Democratic rival Joe Biden.

Trump, as shown in a rough transcript of the July call with Ukraine President Volodymyr Zelenskiy, sought help in investigating not only the firm tied to Biden but also a security company hired by the DNC that discovered that Russian agents had broken into the committee’s network. The stolen emails were subsequently published by WikiLeaks ahead of the 2016 election.

“The look back to what happened in 2016 certainly was part of the thing that he was worried about in corruption with that nation,” Mulvaney told reporters, delivering the White House’s most granular explanation yet of the decision to withhold military assistance.

“Did he also mention to me in the past the corruption that related to the DNC server? Absolutely, no question about that,” Mulvaney continued. “That’s why we held up the money.”

“The President’s legal counsel was not involved in acting chief of staff Mick Mulvaney’s press briefing,” it said.

Within hours, Mulvaney issued a separate statement claiming his remarks were misconstrued.

“Let me be clear, there was absolutely no quid pro quo between Ukrainian military aid and any investigation into the 2016 election,” he said. “The president never told me to withhold any money until the Ukrainians did anything related to the server.”

But it may be difficult to erase what Mulvaney said as House Democrats dig into their investigation.

Rep. Adam Schiff, D-Calif., the chairman of the Intelligence Committee leading the impeachment probe, said, “I think Mr. Mulvaney’s acknowledgment means that things have gone from very, very bad to much, much worse.”

Mulvaney, who has already received a subpoena for documents in the impeachment probe, will now likely be asked by investigators to appear for a deposition.

“I believe that they’re getting closer to basically admitting a crime,” said Rep. Joaquin Castro, D-Texas, who said Mulvaney should testify. “Where he talks about politics being attached to foreign policy. I mean, you’re going up to the water’s edge there.”

Mulvaney during the press briefing defended Trump’s request to Ukraine by casting it as part of an ongoing Justice Department investigation looking into the origins of the investigation into Russia’s interference in the 2016 election.

He said the investigation was one of several reasons Trump held up nearly $400 million in military aid to Ukraine, including a desire for European nations to increase their own assistance to Kyiv. Funding was eventually released.

A senior official at the Justice Department said if the White House was withholding aid in regard to cooperation with any investigation at the department, it was news to them. The official was not unauthorized to discuss the situation and spoke on condition of anonymity.

Trump’s request to Ukraine for an investigation into the 2016 election appears linked to unfounded conspiracy theories about a Ukraine link to the DNC hack that began circulating almost immediately after the breach was discovered. Some were propagated in stories online and by Russian media and included mention of a supposed “hidden DNC server,” which acolytes of the Republican political operative Roger Stone picked up and circulated.

The sudden development punctuated another fast-moving day in the impeachment inquiry.

Lawmakers met for hours behind closed doors with the US ambassador to the European Union, Gordon Sondland, who testified that he disagreed with Trump’s decision to have envoys work with the president’s personal lawyer Rudy Giuliani on Ukraine policy, rather than through traditional government channels.

The ambassador was the latest in a series of witnesses, many of them career State Department and foreign policy officials, providing new and detailed concerns about Trump and Giuliani and their attempts to influence Ukraine.

Sondland’s attempt to stand apart from Trump is remarkable since, unlike other career civil servants, he is a hand-picked political appointee of the president who contributed $1 million to Trump’s inaugural committee.

“You may not like the fact that Giuliani was involved,” he told reporters. “It’s not illegal, it’s not impeachable.”

“The president gets to set foreign policy, and he gets to choose who to do so, as long as it doesn’t violate any law,” Mulvaney added.

As for complaints about mixing politics with foreign policy, Mulvaney had a blunt rejoinder: “I have news for everybody: Get over it. There is going to be political influence in foreign policy.”

Democrats plodding their way through hours of witness testimony during a week of closed-door hearings said Mulvaney’s admissions were game-changing in the impeachment inquiry.