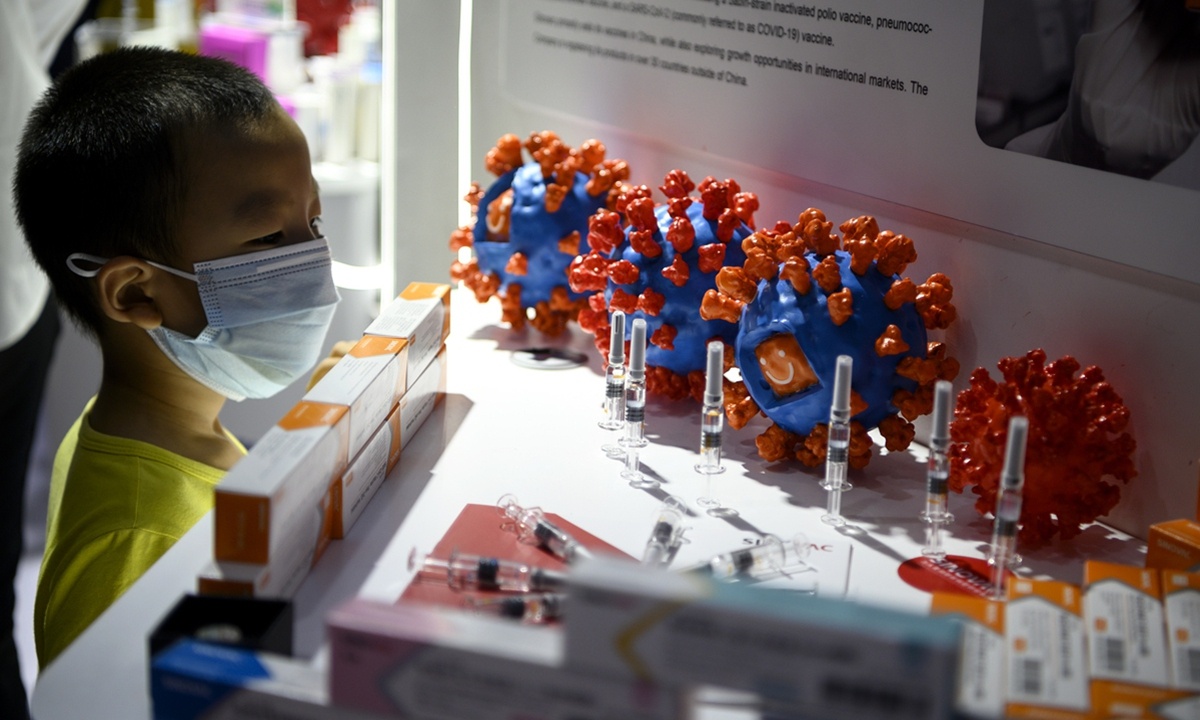 A boy looks at Sinovac Biotech LTD's vaccine candidate for COVID-19 on display at the China International Fair for Trade in Services (CIFTIS) in Beijing. (Photo: AFP)

The World Health Organization (WHO) and Vaccine Alliance (GAVI), two global leading facilitators in promoting COVID-19 vaccine equal distribution around the world, recently applauded China's efforts to support vaccine accessibility to some underdeveloped countries, hailing China's decision to join the COVID-19 Vaccines Global Access Facility, or COVAX, which the US has spurned.

"It is very positive news that China has become part of the COVAX Facility, as it gives even more momentum to our efforts to ensure global, equitable access to COVID-19 vaccines. The COVAX Facility now has 182 economies involved and vaccine deals are underway," a spokesperson for GAVI, which co-initiated COVAX, told the Global Times in a recent interview via text.

China officially joined COVAX on October 8, which is seen as an essential to upholding   the concept of a shared community of health for all and to honor its commitment to turn potential COVID-19 vaccines into a global public good.

The COVAX Facility aims to secure 2 billion doses of a safe and effective vaccine by the end of 2021. The allocation of vaccines, once licensed and approved, will be guided by the WHO Allocation Framework following the principle of fair and equitable access, ensuring no participating economy is left behind.

Nine candidate vaccines are currently being supported by the Coalition for Epidemic Preparedness Innovations (CEPI) for the inclusion in the COVAX portfolio; eight of which are currently in clinical trials, including two candidates from China.

"We welcome the news of China joining the COVAX Facility. The COVAX Facility now have over 170 countries and economies involved, vaccine deals are underway, and we are fast approaching our initial fundraising target for lower-income countries," WHO said in a recent response sent to the Global Times, recognizing China's efforts in the initiative.

"No matter at which stage a country might find itself, it isn't too late to turn the COVID-19 crisis around. With strong leadership, clear and comprehensive strategies, consistent communication, and an engaged, empowered and enabled population, it's never too late to turn the tide," said the WHO spokesperson.

As of October 16th, there are 90 higher-income economies including China that have officially joined the Facility. These agreements unlock vital funding and the security of demand needed to scale up manufacturing and ensure doses are ready once a proven safe and effective vaccine becomes available, according to GAVI, saying that countries joining the COVAX Facility are asked to provide upfront payments to facilitate this.

Greater speed has been possible by making early investments in the scaling up and scaling out of manufacturing capacity, but not at the expense of safety, nor post-licensure processes, to assure strong ongoing safety monitoring, it said.

GAVI said it is encouraging technology transfer to economies which have the capacity to produce vaccines, and where resources permit providing financial support to enable such processes.

The technology transfer is anticipated in Chinese COVID-19 vaccine cooperation with its Brazil partner Butantan Institute, which can independently produce its inactivated coronavirus vaccine named Coronavac developed by Chinese manufacturer Sinovac after the promised technology transfer next year.

Technology transfer can succeed only when the innovator company works closely with the recipient in order to replicate the complex manufacturing processes in the new facility, said GAVI.

Butantan Institute reported that 35 percent of the 9,000 Coronavac volunteers in the late-stage clinical trials in Brazil had only mild reactions, such as pain at the application site, and no serious side effects, according to the statement the Institute sent to the Global Times on Tuesday.

João Doria, governor of the Sao Paulo state, announced on Monday that Coronavac is in the final testing phase in Brazil.