Who are the women supporting Trump? Meet Sen. Marsha Blackburn 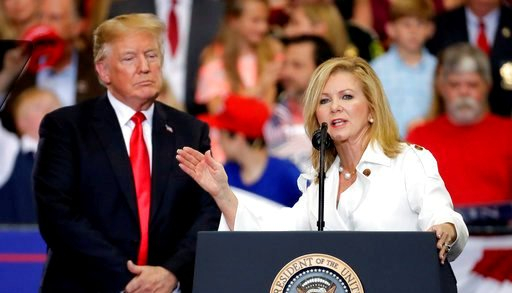 Rep. Marsha Blackburn speaks at a rally with President Donald Trump by her side in Nashville, Tennessee, May 29, 2018. (Photo: AP)

The 2016 US election will be remembered as one in which gender politics loomed large. So when exit polls revealed that more than half of the white American women voted for Donald Trump, a lot of people couldn't wrap their heads around it.

A profile of the female Trump supporter emerged after the election: she is white, suburban and who, despite her noteworthy professional achievements, always describes herself as a God-loving wife and mother in her social media profile, if she has one.

She may be a familiar face in America's heartland, epitomized by Republican Senator Marsha Blackburn of Tennessee, one of President Donald Trump's most loyal allies in Washington and in the Republican Party.

The first woman to be elected to the US Senate from Tennessee, Blackburn's rise from the red state to Capitol Hill is a story of a woman breaking barriers in politics and business against the odds, especially considering only 28.7 percent of all state legislators are women.

But then and again, it is the kind of accomplishment the 67-year-old senator seems to want people to forget. She explained that she wanted voters to support her because of her is qualified for the job, not because she is a woman.

Born in Mississippi, young Marsha Wedgeworth was the all-American girl who won beauty pageants, sewing and chicken-cooking contests, and studied home economics before landing a job in fashion. But the girly girl from south had ambitions besides being a homemaker. While she was a suburban mother in Tennessee, Blackburn already set her sights on Washington as she actively participated in local politics for the GOP.

In 1998 Blackburn entered the Tennessee Senate, where female representation was one of the lowest in the country. After she was elected to Congress in 2002, Blackburn made a point to play down her gender, asking to be called "Congressman" instead of "Congresswoman."

During her time in Congress Blackburn's consistently hard-right stance on hot button social issues like abortion, immigration and same-sex marriage caught nationwide attention, cementing her reputation as a conservative hardliner. This helped Blackburn win hearts in her deeply conservative constituent, a stronghold of Trump's popular support.

In 2015, Blackburn led a congressional investigation against Planned Parenthood over claims the reproductive health care provider sold fetus tissue from abortions. No evidence of such sale was found.

Abortion remained a talking point in Blackburn's 2018 Senate campaign and later as senator, her first bill would seek to defund all abortion providers including Planned Parenthood.

In a video ad announcing her Senate candidacy, Blackburn positioned herself righter than right. "I'm a hardcore, card-carrying Tennessee conservative," she said. She criticized Senate Republicans for "acting like Democrats," spoke of carrying a gun in her purse, said she believed in Trump's immigration ban and vowed to "fight with him every step of the way to build that wall." And in a fashion reminiscent of the president, she declared that she was "politically incorrect," and proud of it.

"A vote for Marsha Blackburn is a vote for me," Trump said in Tennessee ahead of November's midterm elections to shore up support for Blackburn.

Among her vocal critics is pop star Taylor Swift, a Tennessee native. Swift famously broke her political silence a month before the midterms, urging her 112 million Instagram followers to vote for Bredesen in a lengthy post. The star criticized Blackburn's voting records in regards to gay and women's rights, saying that as much as she would like to continue voting for women in office, she was appalled and terrified by Blackburn's voting records in Congress.

The controversial video ad from Blackburn's Senate campaign also started a high-profile spat with tech giants. Twitter reportedly blocked a paid promotion of the video on its platform after it deemed the wording "stopped the sale of baby body parts" – referring to the 2015 investigation – an inflammatory statement.

Blackburn has accused Twitter, along with other social networks, of censorship and bias, joining in a broader conservative backlash against the left-leaning tech industry. She told US right-wing media at the time that "Silicon Valley elites are trying to impose their values on Americans."

Disagreement with Trump on tariffs

Blackburn rarely disagrees with Trump. She has always praised the POTUS' work on economy in particular. Although the Tennessee lawmaker is better known to the American public for her social conservatism, she has spent much of her political career championing GOP fiscal policies like lower taxes and small government.

A retired woman from Illinois once pressed Blackburn for her reason for supporting Trump: "How, as a woman, can you support Donald Trump?" Her response was that it was Trump's handling of jobs and the economy.

However, the multi-front trade war the Trump administration started might prove to be an exception.

"The tariffs are not something that serves Tennessee well, so I disagree with him on the tariffs,” Blackburn said in an interview last year, referring to the steel and aluminum tariffs the Trump administration first announced in March.

Agriculture is central to Tennessee's economy, and Blackburn voiced concerns over retaliatory tariffs with China: "Our farmers are very concerned about those. They do not want to lose those soy markets. They do not want to feel as if they're being impeded from expanding their export base in those markets."

In a recent interview with CNBC following the latest escalation of trade tension with China, the senator once again spoke out against tariffs, explaining that farmers and workers wanted free trade and open market, not aid – what Trump promised farmers hurt by his trade war.

This week, Senate Republicans overwhelmingly opposed new tariffs on Mexico threatened by the POTUS. As Majority Leader Mitch McConnell and Sen. Kevin Cramer have pointed out, there is not much support for tariffs and a lot of GOP senators, including close Trump allies, are tariff weary.

As some analysts have concluded after the 2016 election, voters tend to stick with parties they have traditionally supported, with gender politics relegated to the background.

And for those voting on the right, regardless where they stand on civil rights and foreign policy, the ultimate test for their loyalty will likely be the economy.