WORLD Who are the youths behind the Catalonia protest violence?

Who are the youths behind the Catalonia protest violence? 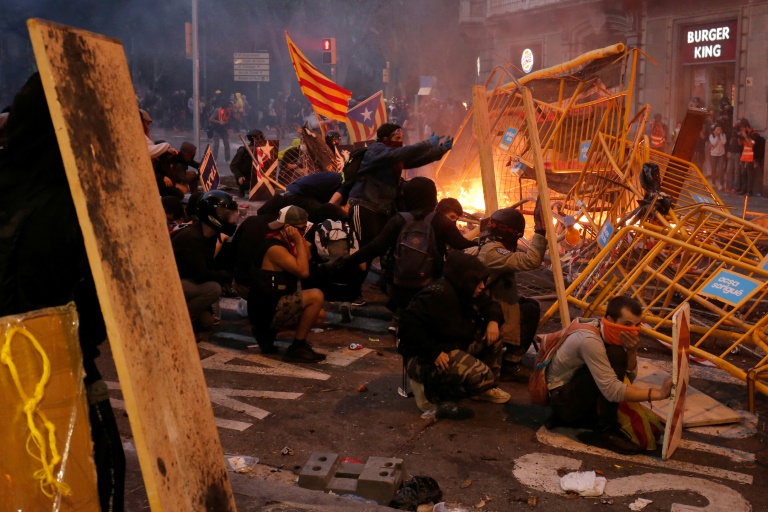 Nearly 600 people have been injured in clashes with police since the Catalonia protests started. (Photo: AFP)

The violent protests that have swept Catalonia over the jailing of nine separatist leaders have involved veteran anarchists and youthful troublemakers as well as outraged separatists, some of whom became radicalised only recently.

"I am 24, have a masters and a job and I never imagined myself setting fire to a barricade with my face masked," said one protester who gave her name only as Aida.

She has joined in protests every day since they erupted in the region after Spain's Supreme Court on Monday sentenced nine Catalan separatist leaders to up to 13 years in jail for sedition over a failed 2017 independence bid.

Nearly 600 people have been injured in clashes with police since the protests started. Demonstrators have set fire to cars and garbage bins and thrown rocks at police, who have responded with batons and rubber bullets.

"I don't justify the violence, but we are simply defending ourselves from the repression of the police," Aida said.

Like Aida, those responsible for the violence are all young, sometimes even minors. They are not intimidated by the television crews, sometimes waving to the camera or dancing in front of burning barricades.

Olivier Cauberghs, a Belgian expert in detecting and preventing radicalisation, said young pro-independence Catalans who have only recently turned to violence have "gone through a long process and didn't decide to turn violent" overnight.

They are reacting to police violence that marred a banned independence referendum held in October 2017 and the failed declaration of independence that followed, Cauberghs said.

The expert, who works with Belgian police and is in Barcelona to observe the protests, told AFP the youths appeared to be letting off steam.

Unlike the anarchists who perpetually commit violence against police, these young separatist activists "will go back to their stuff", he added.

Alongside these frustrated separatists, there are more experienced groups who wear balaclavas and are usually on the frontlines of the clashes with police.

"The tactics they use are not from someone who is using violence for the first time," Cauberghs said.

"They fall within an anarchist profile, they attack the police no matter what, since they are a physical representation of the state."

Further evidence of an anarchist presence is the appearance of graffiti with the popular anarchist acronym ACAB, which stands for "All Cops Are Bastards", on walls, bus shelters and storefronts.

Spanish Interior Minister Fernando Grande-Marlaska said Friday that "violent groups who focus their violence on national police in an organised way" were among those behind the violence.

He did not rule out the possibility that radical youths had come from other European nations to cause trouble.

An interior ministry spokesman said 13 percent of the people arrested at the protests were foreigners.

Other youths, who are unemployed and not political, say they are at the protests with the intention of causing unrest.

"I feel Spanish and I am not a separatist. I come to cause chaos and also because I don't think it is right to put politicians in jail for their opinions," one 19-year-old told AFP.

He declined to be named because he took part in violence against police.

The police "must understand that we know how to show our displeasure, we are not afraid of anything," he added.

His 17-year-old friend, who also declined to be named, is of Venezuelan origin and lives in a juvenile welfare home.

The two youths, who live in a Barcelona suburb, do not speak Catalan and have no links to the separatist movement.

"These youths don't have a good education, no jobs and no future perspective," Cauberghs said.

"They express their frustration against a society that treats them without justice."