WHO declares end of 11th Ebola outbreak in DR Congo 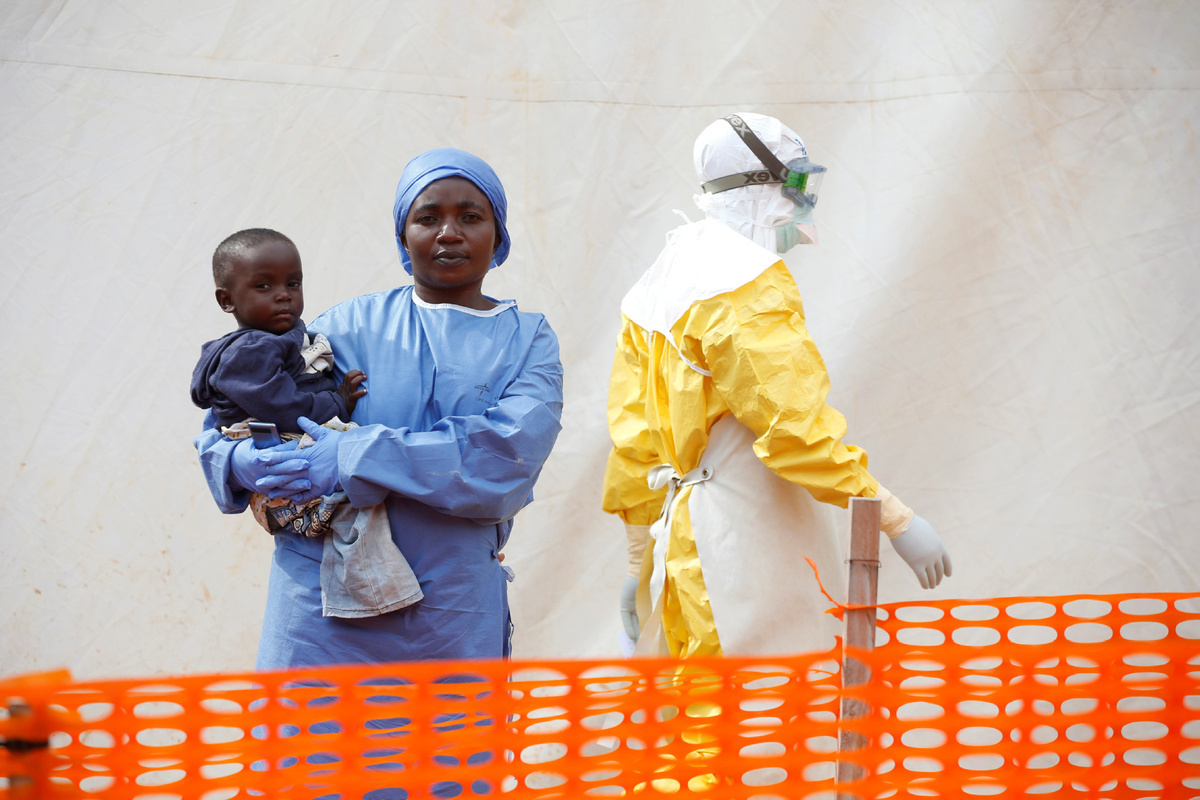 Mwamini Kahindo, an Ebola survivor working as a caregiver to babies who are confirmed Ebola cases, holds an infant outside the red zone at the Ebola treatment centre in Butembo, Democratic Republic of Congo, on March 25, 2019. [File photo/Agencies]

The World Health Organization on Wednesday declared the 11th Ebola outbreak in the Democratic Republic of Congo has ended, 42 days since the last patient tested negative and nearly six months after the first cases were reported in Equateur Province in the north-west part of the country.

The UN agency, however, called for continued vigilance and maintaining strong surveillance as potential flare-ups are possible in the months to come.

Towards that end, the WHO said with its partners it is currently conducting important actions for improving critical operational capacities in the province, including training frontline workers.

A similar caution also was issued by the International Federation of Red Cross and Red Crescent Societies in a statement on Wednesday.

The humanitarian network warned that the announcement does not spell the end of the considerable humanitarian challenges that the country is facing, including the ongoing coronavirus emergency alongside long-standing economic and security issues.

Doctor Jacques Katshishi, the secretary general for the DR Congo Red Cross, said it is not the time to leave vulnerable Congolese communities behind.

"Bringing Ebola to zero is a huge achievement, but now we are faced with our next challenge: Keeping it there. This is not a moment to be complacent; the world cannot afford a resurgence of Ebola in DR Congo. The time to prepare is now," Katshishi said.

Announced on June 1, the outbreak, which was the second to affect Equateur and the third nationwide since 2018, infected 119 people and killed 55. It spread to 13 of the region's 18 health zones.

According to the WHO, response to the 11th Ebola outbreak had to contend with the coronavirus pandemic, which strained resources and created difficulties around the movement of experts and supplies.

There also were challenges around the large number of cases in remote communities that were often only accessible by boat or helicopter, and at times community resistance hampered response efforts.

Despite the logistical and access challenges, most responders were mobilized locally and moved quickly under the government's leadership.

The response also tapped into the expertise of local health workers trained during the two previous outbreaks in the country.

"Responders worked closely with community members to increase understanding of the virus by visiting more than 574,000 households and providing more than 3 million people with pertinent health and safety information," the WHO said.

The UN agency said vaccination efforts began four days after the outbreak was declared and more than 40,000 people at high risk were vaccinated.

Vaccinators used innovative cold chain storage to keep the Ebola vaccine at temperatures as low as minus 80 degrees Celsius.

The WHO said the Arktek freezers can keep vaccines at very low temperatures in the field for up to a week, which enabled responders to vaccinate people in communities without electricity.

The WHO congratulated responders and all those who tirelessly tracked cases, provided treatment, engaged communities, and conducted vaccinations.

"Overcoming one of the world's most dangerous pathogens in remote and hard to access communities demonstrates what is possible when science and solidarity come together," Doctor Matshidiso Moeti, the WHO regional director for Africa, said.

She said tackling Ebola in parallel with coronavirus hasn't been easy, but much of the expertise that has built in one disease is transferrable to another and underlines the importance of investing in emergency preparedness and building local capacity.

Moeti said the technology used to keep the Ebola vaccine at super-cold temperatures will be helpful when bringing a coronavirus vaccine to Africa.

In his official tweeter account, António Gutterres, the UN secretary-general, said the same spirit of commitment and solidarity that led to the success of ending the Ebola outbreak in DR Congo must guide global efforts to defeat coronavirus.