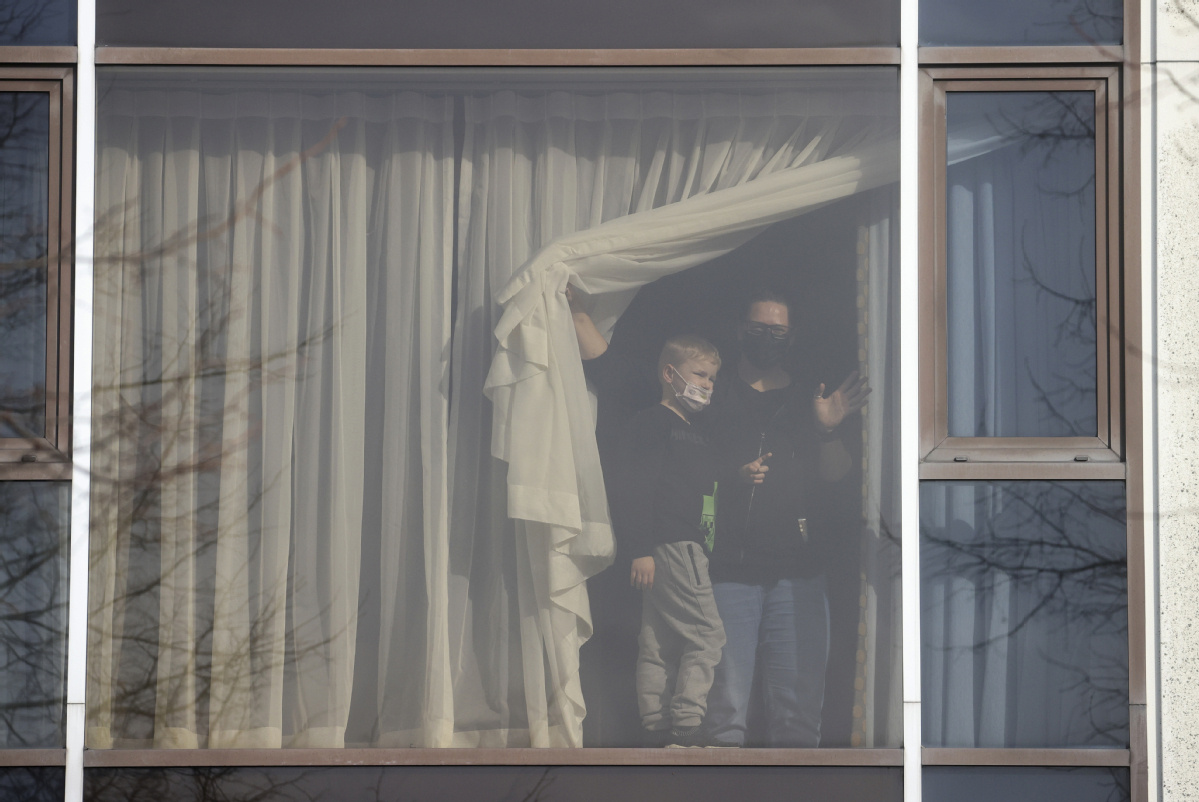 Quarantined occupants gaze out from the Radisson Blu Hotel at London's Heathrow Airport on Monday. [Photo/Agencies]

TORONTO, Canada－The World Health Organization has granted an emergency authorization to AstraZeneca's coronavirus vaccine, a move that should allow the UN agency's partners to ship millions of doses to countries as part of a UN-backed program to tame the pandemic.

In a statement released on Monday, the WHO said it was clearing the AstraZeneca vaccine made by the Serum Institute of India and South Korea's AstraZeneca-SKBio.

The WHO's green light for the vaccine－developed by the Anglo-Swedish drugmaker in partnership with Oxford University－is only the second one the UN health agency has issued, after authorizing a vaccine from Pfizer and BioNTech in December. Monday's announcement should trigger the delivery of hundreds of millions of doses to countries that have signed up for the UN-backed COVAX effort, which aims to deliver vaccines to the world's most vulnerable people.

"Countries with no access to vaccines to date will finally be able to start vaccinating their health workers and populations at risk," said Mariangela Simao, the WHO's assistant-director general for access to medicines and health products.

The coronavirus has infected more than 109 million people and killed at least 2.4 million, according to Johns Hopkins University. But many countries have not yet started vaccination programs and even rich nations are facing shortages of vaccine doses as manufacturers struggle to ramp up production.

The AstraZeneca vaccine has already been authorized in more than 50 countries, including Britain, India, Argentina and Mexico. It is cheaper and easier to handle than the Pfizer-BioNTech vaccine, which needs deep-cold storage that is not widespread in many developing nations. Both vaccines require two shots per person, given weeks apart.

After receiving some 860,000 doses of the AstraZeneca vaccine, Mexico on Monday began vaccinating senior citizens in more than 300 municipalities across the country.

Mexico wants to apply all 860,000 doses in a week to 10 days, and Assistant Health Secretary Hugo Lopez-Gatell acknowledged that Monday's rollout had been slow, in part because vaccination personnel sometimes arrived late.

In addition to the AstraZeneca shots, 2 million doses of the Chinese CanSino vaccine are being bottled in Mexico. Another shipment of Pfizer's vaccine is also expected this week. Russia's Sputnik V vaccine and another from China that have received emergency approval from Mexican regulators are also expected eventually.

Despite ramped-up vaccine efforts worldwide, Britain is pushing ahead with tighter border controls.

Britain's newly established quarantine hotels received their first guests on Monday as the government tries to prevent new coronavirus variants from derailing a fast-moving vaccination drive that has delivered more than 15 million shots in 10 weeks.

Passengers arriving at London's Heathrow Airport were escorted by security guards to buses that took them to nearby hotels.

Under the new rules, residents of the United Kingdom and Ireland arriving in England from 33 high-risk countries must stay in designated hotels for 10 days at their own expense, with meals delivered to their door. In Scotland, the rule applies to arrivals from any country.

Britain has given a first dose of coronavirus vaccine to almost a quarter of its population, but health officials are concerned that vaccines may not work as well on some new strains of the virus.