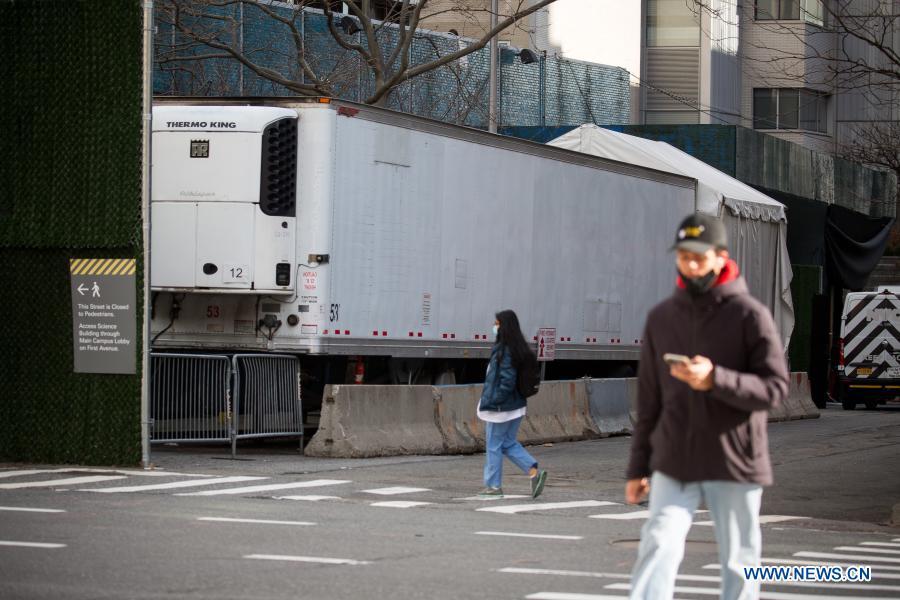 Pedestrians walk past a refrigerated trailer serving as a temporary morgue in New York, the United States, on Jan. 18, 2021. (Photo: Xinhua)

"Geopolitical tensions have impacted on the response, and the resulting pandemic has given us many interlinked reasons to rethink and reset the way in which the international system and countries prepare and respond to global health threats," said the Panel's co-chair Ellen Johnson Sirleaf.

The Independent Panel's new report, available in six UN official languages, was issued late Monday night and will be discussed at the on-going World Health Organization (WHO) Executive Board meeting.

The Independent Panel was established by the WHO Director-General and its mandate is to review experience gained and lessons learned from the WHO-coordinated international response to COVID-19.

Its final report is scheduled for the World Health Assembly in May of this year.

According to the interim report released Monday, the Panel found that member states have high expectations of the WHO but have left it underpowered to do that job.

"The WHO is expected to validate reports of disease outbreaks for their pandemic potential and, deploy support and containment resources, but its powers and funding to carry out its functions are limited," said Sirleaf.

The Panel said even when WHO declared a Public Health Emergency of International Concern in January of 2020, the loudest alarm possible under the International Health Regulations, many countries took minimal action internally and internationally to prevent the spread of COVID-19.

The Panel also found that the international system for alert and response is not fit for purpose -- it seems to come from an earlier analogue era and needs to be brought into the digital age.

The Panel also expressed deep concern over the continued significant rises in the numbers of COVID-19 cases and deaths, saying that since Jan. 1 of 2021, the world is recording an average of almost 12,500 daily deaths.