The World Health Organization (WHO) on Sunday refuted a report from media outlet Der Spiegel regarding the details of information-sharing on COVID-19 between China and the organization, slashing false reports that distract global efforts in fighting the pandemic as the report also contradicted the official timeline of the epidemic response that the Chinese government had earlier released. 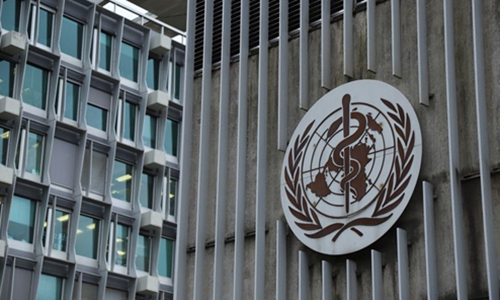 Photo taken on Jan. 30, 2020 shows the headquarters of the World Health Organization (WHO) in Geneva, Switzerland.(Photo: Xinhu)

The WHO comments came after the German newspaper published an article on Friday, citing the country's intelligence service, claiming that China urged the organization to delay global warnings following the outbreak and that Chinese President Xi Jinping requested via a phone call with WHO chief Tedros Adhanom Ghebreyesus on January 21 to ask him to withhold information on human-to-human transmission, claiming this caused the world a delay of four to six weeks in fighting COVID-19, the newspaper said.

The WHO refuted media claims by saying that reports of a January 21 phone call between the WHO chief and President Xi were unfounded and untrue. They didn't speak on January 21 and have never spoken via phone. Such inaccurate reports distract & detract from the WHO's and global efforts to end COVID-19, said an official tweet from the WHO.

China confirmed human-to-human transmission of the virus on January 20, the WHO added in a follow-up tweet.

Some Twitter users also raised suspicions regarding the report as they believe the alleged cover-up makes no sense particularly when the Chinese government had already publicly revealed human-to-human transmission the day before. Also, there was no information relevant to such a call on the official timeline of China's COVID-19 response that the Chinese government released on April 6.

"Groundless and false reports are also part of a disinformation campaign being waged against China by some Western media and politicians," Xin Qiang, deputy director of the Center for US Studies at Fudan University, told the Global Times on Sunday. Such a campaign has been fueled by US-led anti-China sentiment and rhetoric which has been escalating in recent weeks as the pandemic continued worsening.

On January 20, the National Health Commission held a press conference for the high-level expert team headed by Zhong Nanshan, who on the team's behalf confirmed human-to-human transmission of the novel coronavirus and advised people not to go to Wuhan except for extremely important reasons, according to the official timeline. On January 21, Zhong said at another press briefing that "since it is known that the virus can be transmitted from people to people, one thing to do is to strictly quarantine patients and track close contacts, which is probably the most important thing."

In addition, China has been sharing information with the WHO publicly from January 3.