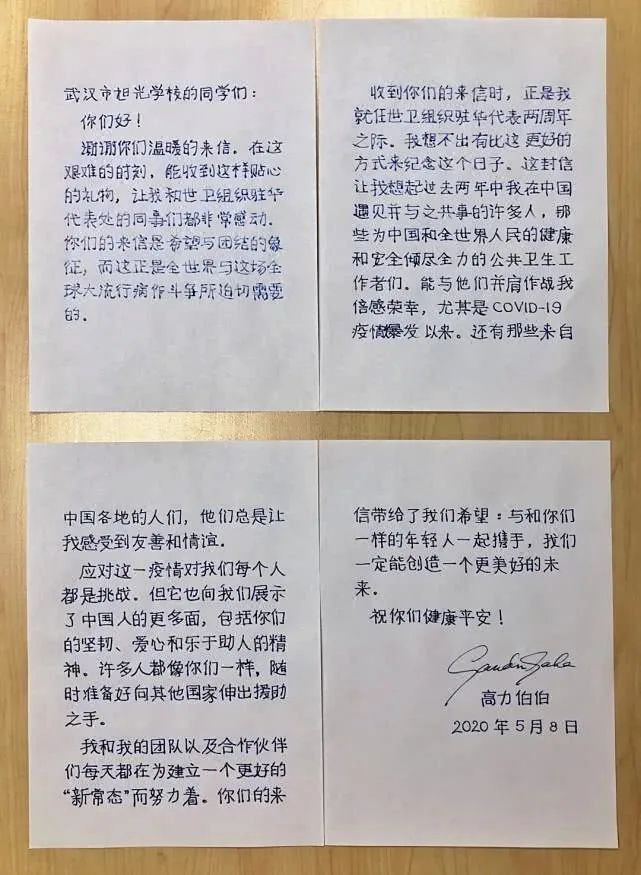 A letter to Wuhan middle school students by the World Health Organization representative in China has moved many people in China.

But it was not just the sentiments expressed by Gauden Galea, a doctor originally from Malta, but also his penmanship, as seen in the four-page response to the students written in Chinese.

The story starts with a letter from students at Xuguang Middle School in the capital of Hubei province, which also was the Chinese city hardest-hit city by the COVID-19 outbreak.

On May 5, students from the school sent a letter to Galea, telling him how they felt and what they were seeing in Wuhan as people's lives were gradually returning to more normality in a new phase in the battle against the virus.

Their letter, which began with greetings to "Uncle Galea", also called on young people around the world to come together to help people in need.

"No one is isolated in the epidemic. The virus is the enemy of all people," said the letter. "We are the future of the world and should take the responsibility of safeguarding its future."

The students also expressed their willingness to donate money to the WHO they've earned by recycling bottles.

On Monday, when Galea replied, WHO released a video on its Sina Weibo account showing how the public health doctor carefully wrote each character and signed his name in English.

"Thank you for your warm letter.... Your letter is a symbol of the hope and solidarity the world so badly needs in its fight against this global pandemic," Galea wrote.

"The fight against the virus is a challenge to us. But it also helps us to know more about the Chinese people, their tenacity, compassion and willingness to help, the same as what I can see from all of you."

The video had been viewed more than 3.5 million times as of Friday. Many of those who saw it said in comments that Galea's letter was very touching and his calligraphy also nice.

"This is a letter that carries love. It truly moved me. Mr Galea, your written Chinese is excellent," said a netizen called Bositang.

Through the WHO's microblog, Galea also replied to comments on Monday. He showed gratitude toward the praise for his calligraphy, which he said will encourage him to learn the Chinese language better.

The WHO said on its microblog that through their letter, "we can feel the Wuhan students' love for life, and their concern about the global pandemic and the entire human race. Every word in this letter has touched the hearts of Dr Galea and all his colleagues in the WHO China office."

According to the WHO, it was the first time that Galea had been called Uncle Galea. When he learned of what the letter said, he insisted on replying in Chinese. Galea has worked for the WHO since 1998. He has been in China for two years and became the WHO's representative in China in May 2018.