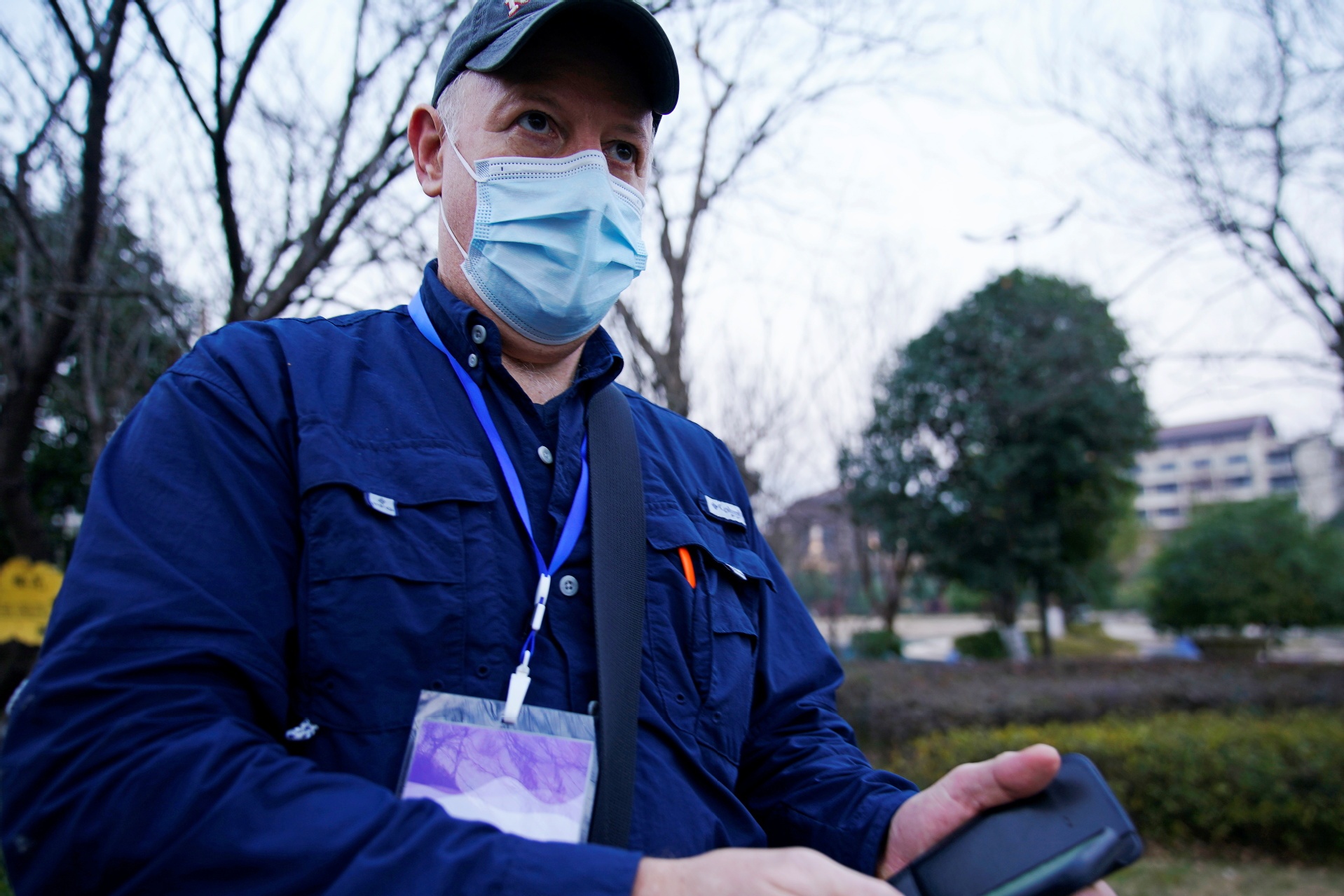 Peter Daszak, a member of the World Health Organisation (WHO) team tasked with investigating the origins of the coronavirus disease (COVID-19), walks at a lakeside at a hotel in Wuhan, Hubei province, China, February 3, 2021. (Photo: Agencies)

Members of a World Health Organization team who were part of a COVID-19 origin-tracing mission in China have denounced The New York Times for a controversial report, including one member who said they were "selectively misquoted" and another who said their remarks were "twisted".

"This was NOT my experience on@WHO mission. As lead of animal/environment working group I found trust & openness w/my China counterparts. We DID get access to critical new data throughout. We DID increase our understanding of likely spillover pathways," Peter Daszak, a member of the WHO team, wrote on Twitter after he was quoted by The New York Times.

The report accused Chinese scientists of refusing to share important data about the early days of the COVID-19 pandemic, citing independent investigators for the WHO.

The international team that recently finished its work in Wuhan is comprised of experts from Australia, Denmark, Germany, Japan, the Netherlands, Qatar, Russia, Britain, the United States and Vietnam.

The team also includes experts from the Food and Agriculture Organization of the United Nations and the World Organization for Animal Health.

In the report, Daszak said their trip was emotionally draining as they came to terms with the trauma of the early days of the pandemic.

Thea K. Fischer, a Danish epidemiologist on the team, also immediately rebutted the report, which she said "intendedly twisted" the interviewees' remarks and cast "shadows over important scientific work".

"This was NOT my experience either on the Epi-side. We DID build up a good relationship in the Chinese/Int Epi-team! Allowing for heated arguments reflects a deep level of engagement in the room," she wrote on Twitter.

Daszak tweeted in a reply note: "Hear! Hear! It's disappointing to spend time w/journalists explaining key findings of our exhausting monthlong work in China, to see our colleagues selectively misquoted to fit a narrative that was prescribed before the work began. Shame on you @nytimes!"

Other health experts also voiced their opinion on the incident, calling for mutual trust and respect for international cooperation on COVID-19 research.

"Collaboration is all about mutual trust and respect. If you don't have that, no one is going to share data with you. As EID scientists, we urgently need to jettison the political crap. Hopefully there is enough enduring personal goodwill for us to effectively proceed ..." tweeted Hume Field, a science and policy adviser of EcoHealth Alliance in New York. EID stands for emerging infectious diseases.

There was no widespread or large cluster of COVID-19 in or around Wuhan in the months prior to December 2019, said Peter Ben Embarek, head of a WHO expert team, at a virtual news conference from Geneva on Friday, saying the mission was "successful in many ways."

Experts will still continue to look for answers on this point as "there's not a clear candidate for intermediates or hosts yet," said virologist Marion Koopmans, a member of the team, at the WHO news conference on Friday.

Earlier, the international team presented their initial findings at a news conference in China, discounting the hypothesis that the virus escaped from a laboratory.

The team has been working on a summary report expected to be published soon, and a full final report will be published in the coming weeks, Tedros Adhanom Ghebreyesus, director-general of the WHO, said on Friday.

The WHO chief explained that the mission achieved a better understanding of the early days of the pandemic and identified areas for further analysis and research.

"We have always said that this mission would not find all the answers, but it has added important information that takes us closer to understanding the origins of the virus," he added.

COVID-19 origin-tracing is "a complex scientific issue involving many countries and regions," and should be carried out by global scientists in collaboration, Chinese Foreign Ministry spokesman Wang Wenbin said on Feb 5.

"The Chinese government has provided strong support and assistance for the WHO mission's visit to China as part of the global origin-tracing study cooperation," he said, adding that China will maintain openness, transparency, close communication and cooperation with the WHO.