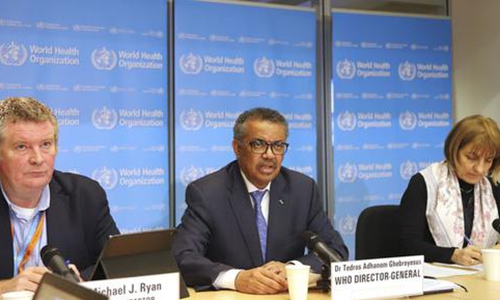 Dr. Tedros Adhanom Ghebreyesus (C), World Health Organization (WHO) Director-General, addresses a press conference, on which WHO said that China's latest epidemiological paper on COVID-19 is important in enabling it to provide advice to other countries, in Geneva, Switzerland, Feb. 17, 2020. (Photo: Xinhua)

The World Health Organization (WHO) is likely to determine whether to classify the COVID-19 as a "pandemic" next week, Jennifer Huang Bouey, a US epidemiologist and senior policy researcher in China Policy Studies at the RAND Corp, told the Global Times on Monday.

In the past few days, the COVID has been spreading rapidly in multiple countries around the world including Japan, South Korea, Italy, and Iran. The World Health Organization chief Edros Adhanom Ghebreyesus warned Friday that the window of opportunity to prevent the new coronavirus outbreak from spreading was shrinking.

The definition of a 'pandemic' by the WHO, is the worldwide spread of a new disease.

The US epidemiologist noted that to define an epidemic as a pandemic would indicate that such a disease is spontaneously spreading in many countries and regions on a global scale. And the WHO would tend to give such classification when an epidemic outbreak is found in more communities without connections to Chinese tourists, according to the US expert.

"Given the current situation, the WHO would likely draw a conclusion next week."

"It is very possible for the WHO to give COVID-19 such classification, and it would be helpful in raising epidemic prevention awareness of every government around the world, especially those with relatively less advanced public health systems," Yang Zhanqiu, deputy director of the pathogen biology department at Wuhan University, told the Global Times on Monday.

As of Sunday, there were 78,000 cases of COVID-19 in at least 30 countries, including a surge in the numbers of cases in Italy, Iran, and South Korea, as well as an ongoing outbreak on a cruise ship off Japan.

The combined situation in South Korea, Iran, and Italy points to the early stages of a pandemic, a BBC Monday report stated.

"In each of these countries, we are seeing the spread of the virus with no connection to China. The lockdown efforts in Italy mirror those of China," it added. For example, the BBC said the first case in Lebanon is seemingly linked to a traveler from Iran.

"If we have a pandemic, it will still be important to limit the speed of infection. If countries could hold it somewhat at bay until the end of winter, there is hope that warmer temperatures will reduce the time the virus can survive in the air, as we see with seasonal flu. But this may not be certain," it said.

On Monday, the US Associate Press reported that a staggering 50 people had died from the new coronavirus this month in Qom, Iran, which was later rejected by Iran Health Ministry spokesman Iraj Harirchi on Monday.

According to the Iranian official, the number of confirmed cases of the novel coronavirus nationally was 61, with 12 reported deaths.

Commenting on such differences in figures, Yang noted he found the official data report more reliable, as the AP report could not verify the source of the data, and Iran did not have the need to conceal reports, otherwise it could issue no reports regarding the epidemic at all.

When asked the reasoning behind the fatality rate of COVID-19 which stands at roughly 20 [per its official figure of 12 out of 61] being much higher than heavily affected countries such as China, South Korea, and Japan, Yang said he was not surprised that the fatality rate was higher at such an early stage of the outbreak.

The explanation behind such a high fatality rate could be that the country has yet to establish the specific nor effective diagnosis of patients and treatment methods for the disease, and the number of confirmed cases are still lower than what is perceived in reality he noted.

"Such a rate could decrease as Iranian medical experts master more knowledge of the virus."

China's central government has managed to coordinate medical materials and human resources from all over the nation to support Wuhan, and subsequently reduced the fatality rate of the disease to around 2 percent, which is epic and applaudable, Yang said.

However, as most countries around the world do not have what it takes to copy what China has done in the fight against COVID-19, the global fatality rate of the disease could climb to 5 percent, twice to that of China, or even higher, Yang warned.