WORLD WHO urges for int'l support as Ebola cases near 1,000 in D. R. Congo 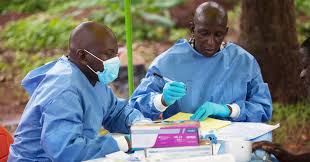 GENEVA, March 23 (Xinhua) -- The World Health Organization (WHO) on Saturday called for urgent global support to deal with the Ebola outbreak in the Democratic Republic of the Congo (DRC) as the number of infected cases approaches 1,000.

Since the Ebola outbreak was declared in the DRC in August 2018, the number of confirmed and probable cases has amounted to 993, resulting in 621 deaths.

Though more than 96,000 people have been vaccinated in the country, and more than 44 million border screenings have helped to slow the spread of Ebola, the risk of national and regional spread remains very high, especially when episodes of violence and instability impact the response, the WHO warned in a statement.

"This outbreak has gone on far too long. We owe it to the people of North Kivu to work with them in solidarity not only to end this outbreak as soon as possible, but to build the health systems that address the many other health threats they face on a daily basis," WHO Director-General Dr. Tedros Adhanom Ghebreyesus said.

Currently the UN health agency has more than 700 people in the DRC addressing the concerns of the affected communities. But "their fear of violence is now compounded by fear of Ebola," said Dr. Tedros.

The WHO chief vowed that despite the increased attacks by armed groups, the WHO "will stay the course and will work with communities to end this outbreak together with the Ministry of Health and partners".

"We need redoubled support from the international community, and a commitment to push together to bring this outbreak to an end," he added, referring to a financial need of at least 148 million U.S. dollars for the next six months, though only half, or 74 million dollars, had been received as of March 19.

The WHO urged donors to help close the funding gap so as to end the outbreak as soon as possible.