WORLD Who won the lottery? Why some states in the US allow winners secrecy

Who won the lottery? Why some states in the US allow winners secrecy

Like the location of Jimmy Hoffa's body, the secret formula for Coca-Cola and whether there are aliens in outer space, the identity of the winner of the second-biggest lottery in American history may remain hidden forever — because of where the person bought the ticket.

South Carolina, where someone recently purchased the ticket at a convenience store , is one of a handful of states that play Mega Millions and allow winners to be anonymous. Lottery jackpots are often synonymous with dazed winners holding an oversized check, but officials and lawmakers say anonymity can protect winners from being targeted by criminals and unscrupulous people coming out of the woodwork asking for money. 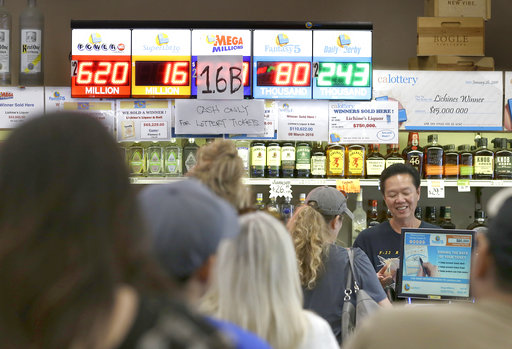 "Everything we do we try to create a winner, whether it is education, whether it is a retailer, whether it is a player. Why do you want a player who is a winner and now he becomes a loser because his name is out there?" said South Carolina Education Lottery Chief Operating Officer Tony Cooper in explaining the board's policy of allowing winners to claim prizes anonymously.

If someone thinks it's best for their safety or sanity to not be named publicly, Cooper says the agency would respect that decision. And they have in the past. Cooper said the agency successfully fought off a Freedom of Information Act request for identifying information of winners including the winner of a nearly $400 million Powerball jackpot in Lexington County in September 2013.

Delaware, Georgia, Kansas, Maryland, North Dakota, Ohio, South Carolina and Texas all allow anonymity to Mega Millions winners. In Arizona, people who win more than $600 can keep their names secret for 90 days after claiming prizes, but after that names are public record. In Michigan, winners are anonymous unless they win Mega Millions or Powerball prizes.

Some states have had this policy since their programs started, and generally they apply the anonymity rule not just to the Mega Millions but other games as well.

Georgia is one of the most recent states to let jackpot winners pass on letting their names be publicized. State Senate Minority Leader Steve Henson, a Democrat from Stone Mountain, proposed the change and it was signed into law this year. Anyone who wins a jackpot of $250,000 or more can opt to be anonymous. Henson said he took the step after a constituent — who hadn't won anything but was preparing for the future — worried he'd have to move or disappear if he won the lottery. So far 74 people in the state have won $250,000 or more and all have requested anonymity, Henson said.

"I have not met one person who didn't think it was a good idea. Especially with those large winnings on the table," he said. "They were grateful they could keep their name confidential."

In Texas, legislators last year changed the law to allow winners of jackpots $1 million or more to remain anonymous.

Arizona has a slightly modified approach. Arizona legislator John Kavanagh tried in 2013 to get a law passed letting winners remain anonymous but it wasn't until 2015 that a compromise passed that allows winners 90 days before their name is subject to a public records request. He pushed for the changes after a resident in his town won a jackpot.

"I remember saying to myself 'That's fantastic but I'd be worried about my children being kidnapped or people hitting me up for loans,'" he said. "It's just gossipy, unnecessary knowledge for the public to have. It's nobody's business."

Proponents of publicizing the winners' names generally say it maintains the integrity of the games and it's a matter of government transparency. When Texas made its change last year, the Freedom of Information Foundation of Texas opposed it.

"Our position was just that if it is a substantial amount of public money being paid out then it needs to be transparent and it needs to be open," said Kelley Shannon, the group's executive director.

In New Hampshire, lottery officials argued that a woman who won a Powerball jackpot worth nearly $560 million should be identified to ensure the public she's a "bona fide" lottery participant and "real" winner. But a judge in March ruled that the woman could remain anonymous, noting that if her identity was revealed, she could be subject to harassment and solicitation. New Hampshire allows trusts to anonymously claim lottery prizes.

And having that person waving a big check at a news conference for all the world to see? It also drives interest in the games.

Vernon Kirk heads the Delaware Lottery. In 1988, the state changed their rules to allow anonymity after constituents complained to a legislator that people were bugging them after their names were released, he said. Now almost everyone chooses anonymity.