WORLD Why do Chinese flock to Britain for holiday learning

Why do Chinese flock to Britain for holiday learning 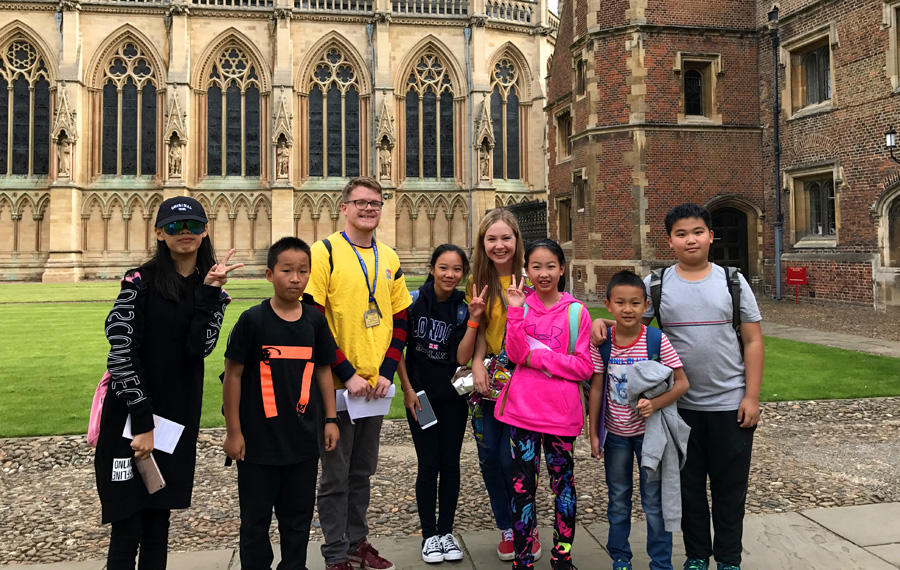 On a warm summer day in the peaceful English university city of Cambridge, a group of teenage Chinese students was hosting a charity barbeque lunch to raise funds for the East Anglia Children's Hospice.

Big smiles appeared on their faces as they saw weeks of preparation turn into a meaningful and enjoyable gathering, which also raised more than 1,000 pounds ($1,300) for the charity they got together to support.

The scene took place in August last year at a summer camp hosted by the Cambridge Centre for Languages. The program, spanning about a month, offered students intensive training in English and understanding of British culture. Daily academic lessons were balanced with fun activities including dancing, singing, sports and weekend trips to well-known British attractions.

"We craft the program to give students an authentic glimpse into quintessential British culture, which is rich in history, arts, literature, technology and a lot more," said Laura Chen, principal of the centre.

For Chinese students, such experience-based summer camps are a welcome break from their heavy academic burden and exam results-driven classes at home. Many are also, for the first time, encountering tasks that enhance social skills, creativity and teamwork. Organizing a charity lunch is one such example.

Many Chinese students are away from home for the first time, and the experience of taking care of their own schedules, food, laundry and other life requirements in an unfamiliar country while also being in a foreign-language environment is quite a coming-of-age experience.

"Ninety percent of parents tell us that their children become more grateful for their parents' love and care. They realize that no matter how much their homestay parents love them, it is only their own parents who would bother to cook them a bowl of egg noodles in the middle of the night when they say they are hungry," Qian said.

In recent years, overseas summer study camps have become very popular among Chinese students. In July and August, crowds of Chinese students gather at popular tourist attractions, including the British Museum, the Tower of London, the Palace of Westminster and the Globe Theatre.

Such a trend is perhaps not surprising considering that the UK and US are the two most popular summer camp destinations, together hosting about 60 percent of outbound Chinese students, according to estimates by New Oriental Education & Technology Group. 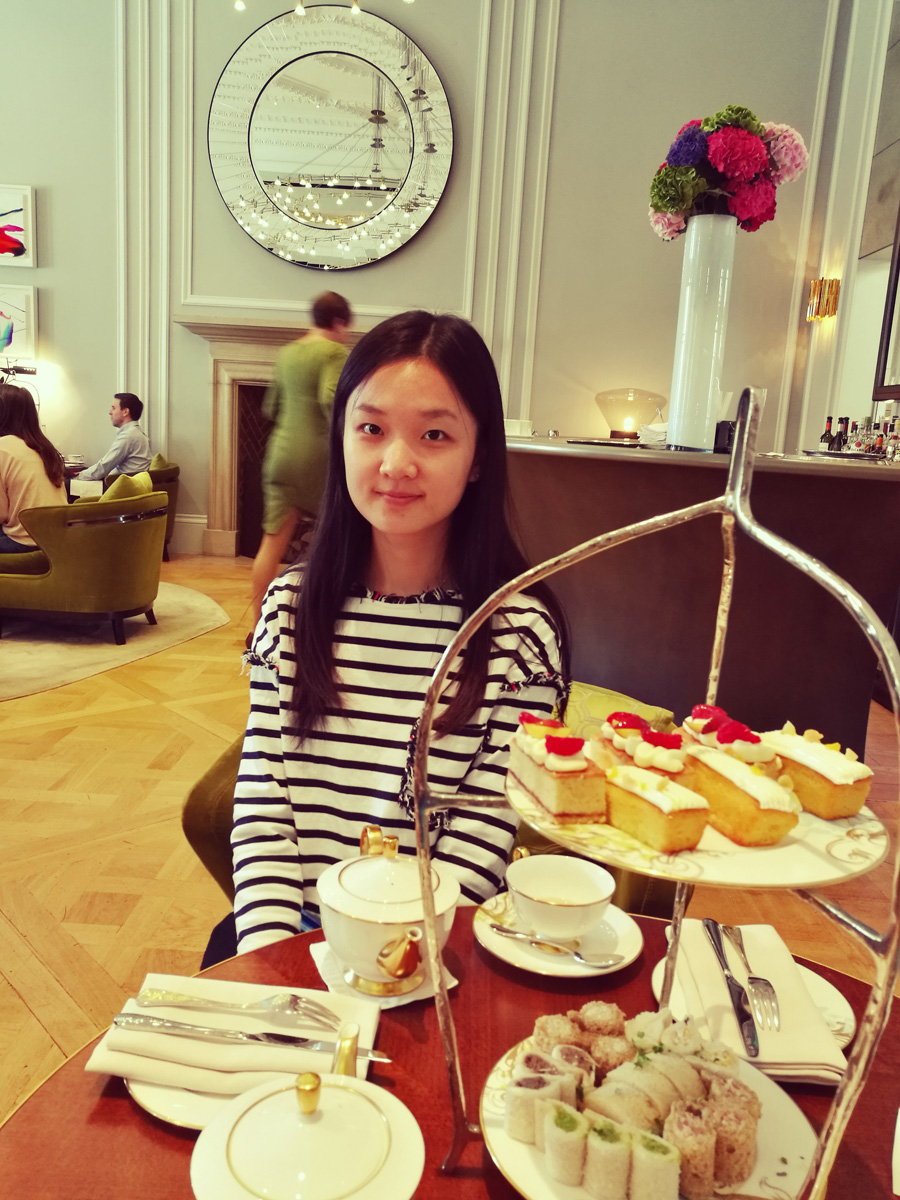 Chen Yixin samples British afternoon tea after class. She attended a summer school camp in the UK in 2016. [Photo/China Daily]

On the surface, such summer school programs differ little from what British students receive in school during term time.

But in reality, such programs can be eye-opening experiences for Chinese students coming to the UK.

"For the first time in a long while, I felt that I could forget about exam results and piles of homework. I loved sitting on the grass, looking at the sky and reflecting about life," said Wu Jiaming, a 14-year-old girl from Fujian province.

In drama class, she played Romeo in Shakespeare's Romeo and Juliet, and eventually discovered a passion for acting. "That was my first time trying out acting. It was such a magical experience. It allowed me to see the world from a different perspective," Wu said.

"One day, we received a little assignment, which tasked us with taking a picture together with someone from Cambridge. I approached the owner of a pop-up food stall outside Cambridge City Hall and asked in English if I could take a photo with him. He replied 'yes' in Chinese, and I was pleasantly surprised," Han said.

Han exchanged contacts with the pop-up store owner on WeChat, and the two friends still send each other greetings during holidays such as Spring Festival.

For students such as Wu and Han, such experiences are treasured memories in their journey into adulthood. Similar experiences are sure to be shared by many more Chinese students for years to come.

Ctrip, which released these figures in April in its 2017-18 Study Tour Market Report, said China has 180 million students from kindergarten to high school, and about 5 percent of them are expected to take part in summer schools, both domestically and internationally. 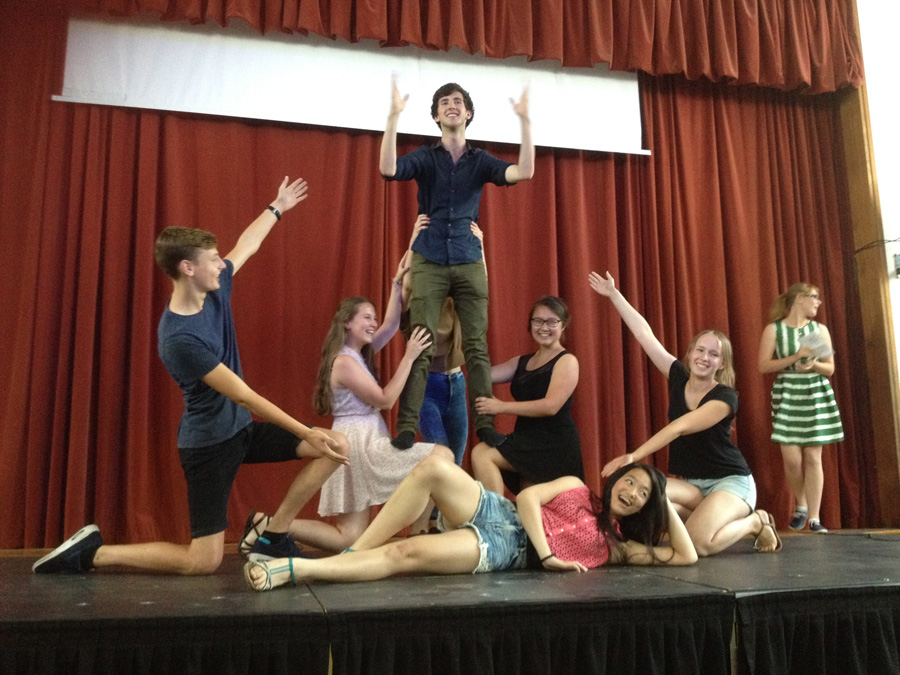 A drama class is held at the Cambridge Centre for Languages summer camp. [Photo/China Daily]

Ctrip forecasts that in three years' time 10 percent of these students will join summer camps.

Some summer camps are organized by Chinese secondary schools and universities for their students.

Meanwhile, many niche players are also emerging in the market, offering tailor-made programs with the focus on music, drama and sports, among other trips.

CC Education is also launching a new program next year called Mum and Me to target Chinese and other Asian students who have limited experience of being away from home. The program allows mothers to enjoy their own activities, such as shopping, and to join their daughters after they finish class.

On average, an overseas summer camp trip costs about 29,000 yuan, significantly higher than the average cost of 4,200 yuan for a domestic study trip, according to Ctrip.

Wang Qingsu, a parent, says he feels overseas study trips are more attractive for parents who can afford to pay for them. His 11-year-old daughter Angela attended a UK summer camp last year.

"The trip allowed my daughter to improve her English, broaden her vision of the outside world, and develop an ambition to apply for university overseas later," Wang said.

Booming business opportunities, however, also create challenges. One big issue is the emergence of many different summer camps on the market, and many parents and students can be confused about which camp to pick. 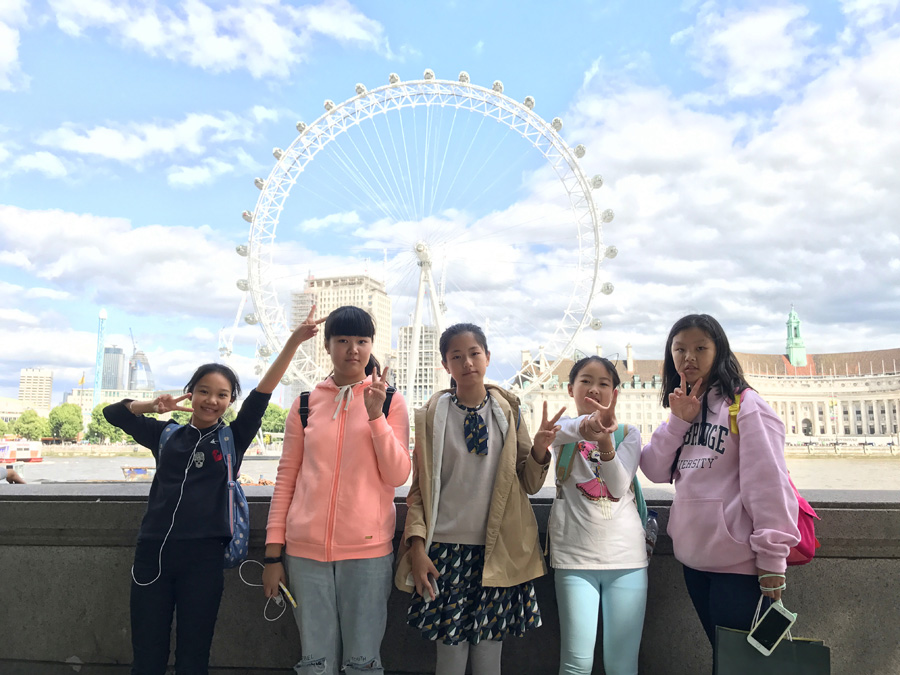 Students gather for summer school in the UK. [Photo/China Daily]

Some camps are hosted by tour operators, meaning they are dominated by tourism experiences with few academic components.

"In China, this market is difficult to regulate. The existence of tourism-based study trips is not a problem because some students may prefer such trips. But these trips should not be marketed under the guise of learning-based camps," said Qian, head of the Wuhan Foreign Languages School.

Students signing up for British summer camps will find the market easier to navigate, as the British Council, a government agency, keeps a list of accredited summer schools, which it monitors regularly for quality.

Summer camps without official accreditation can still operate, but they have a harder task in persuading customers of their quality.

Most students return home with sweet memories and everlasting friendships, but some disappointments are unavoidable.

Zhang Shuji, a Shanghai University student who attended a summer camp hosted by King's College London, said she was disappointed when she realized her classes were not taught by the college's faculty members.

"I was slightly disappointed, because originally I wanted to interact with KCL professors so I could gain a better understanding of whether I wanted to apply to this university for my master's degree," said Zhang.

"It was later that I realized our classes are taught by academics freelanced by the school to teach the summer program. In the end I didn't mind too much, because the teachers were very professional, too," she said.

In most cases, summer school programs in the UK are not taught by the host institute's teachers, because these teachers take breaks in the summer during school holidays.

Another common complaint is the lack of flavor and diversity of British food.

"We ate potatoes almost every day in the school canteen, and I could hardly taste any flavor in the potatoes. In the last week of the camp, we really couldn't endure the boring food anymore, so we ended up going out to a Chinese restaurant everyday," Wu said .