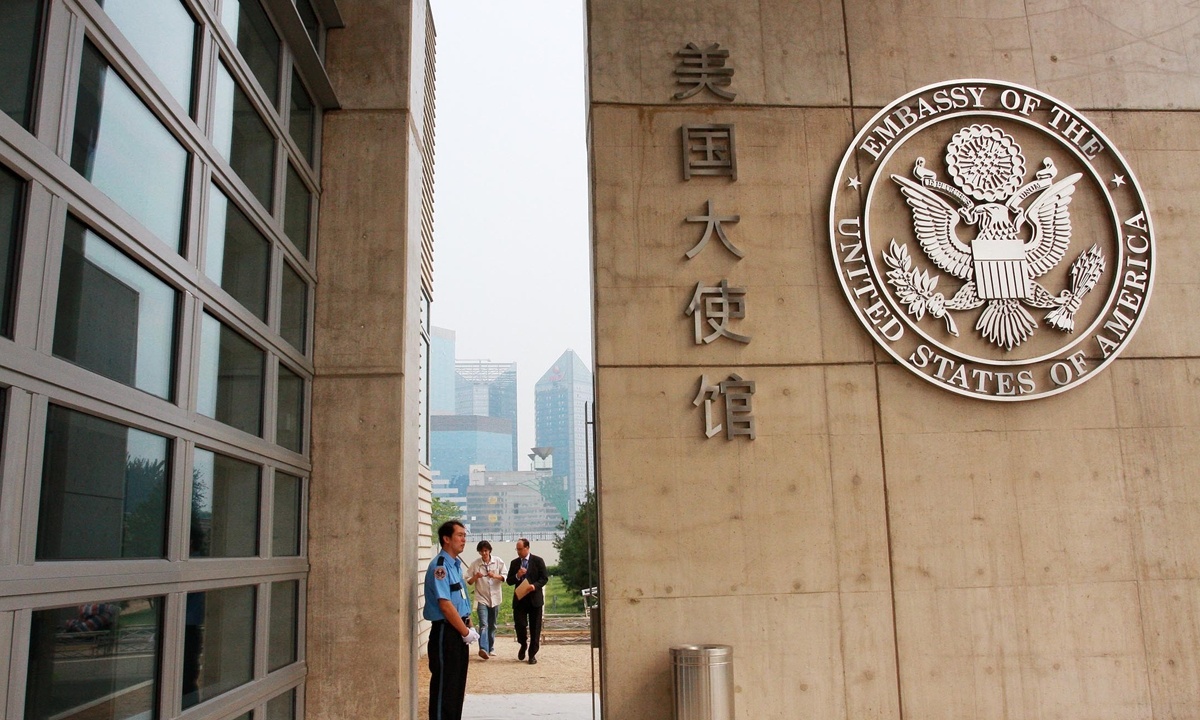 US Embassy in China Photo: cnsphoto

The US Embassy in China is releasing data of air quality, again. The newly added criterion is O₃ quality index, something that is unfamiliar to the Chinese public. But China has always been monitoring this index. Any weather forecast APP includes relevant data. As China's governance on air pollution keeps progressing, reducing O₃ pollution is certainly one of the issues China strives for.

In 2011, the US Embassy published an extraordinarily high level of PM2.5, which sent waves across China's social network. This abruptly imposed pressure on China's air quality monitoring. At that time, social media had just become popular in China, and voices that praised and supported the US Embassy made up the majority of users. After that round of "clash", PM2.5 figures were included in the scope of China's air quality monitoring.

Ten years later, the US Embassy has made another move. But online opinion toward the US Embassy is utterly different from it was a decade ago. This is the most striking change. Below the Weibo post of the US Embassy, the comments that received the most likes are criticisms and mockery of the US Embassy. These include "Floyd cannot breath", "When will Mr. Ambassador go to Japan to monitor radioactive containment?", "China's embassy in the US should make a US Daily Shooting Index", "You will protect the environment if you don't throw bombs", and "The US says, 'Japan's nuclear waste water is clean, while Xinjiang cotton is not.'"

There are also voices supporting the US Embassy. One said, "The enlightenment of the Chinese people about air quality should be given credit to the Americans." But such voices are very few.

Such a change is thought-provoking. The Global Times believes there are two main reasons. First, the US in recent years has regarded China as a strategic competitor, arbitrarily suppressing and containing China. This has totally damaged the image of the US within China.

Washington has also cooked up numerous rumors against China, with presidents and secretaries of state often making irresponsible remarks. The US government's anti-epidemic performance has surprised the Chinese people. All this has crippled the credibility of US official information. The US, on many occasions, is looking like a country with a bankrupt reputation.

Second, China in recent years has made great efforts with environmental protection. This has led to a substantial improvement of Beijing's air quality, and an alleviation of the smog problem that had once choked the capital. The government's efforts to address the problem have been recognized by the public.

With this context, the US Embassy published its air quality monitoring data again. But many Chinese people now have less expectations for this monitoring to promote China's environmental protection, as had happened before. They have instead become vigilant about the US Embassy's attempt to create trouble and conflicts in Chinese society.

The public's initial response to the US Embassy monitoring this time also reflects a more profound change - namely the influence of US culture and values on Chinese society is rapidly plummeting. China's anti-epidemic methods, including domestically made vaccines, and the merits of our collectivism have all gained recognition from the Chinese people.

Of course, China still has its problems, including environmental protection issues. The country still has a long way to go to become fully modernized. However, we have already known what we should do, and are increasingly confident that we can solve those problems in a Chinese way.