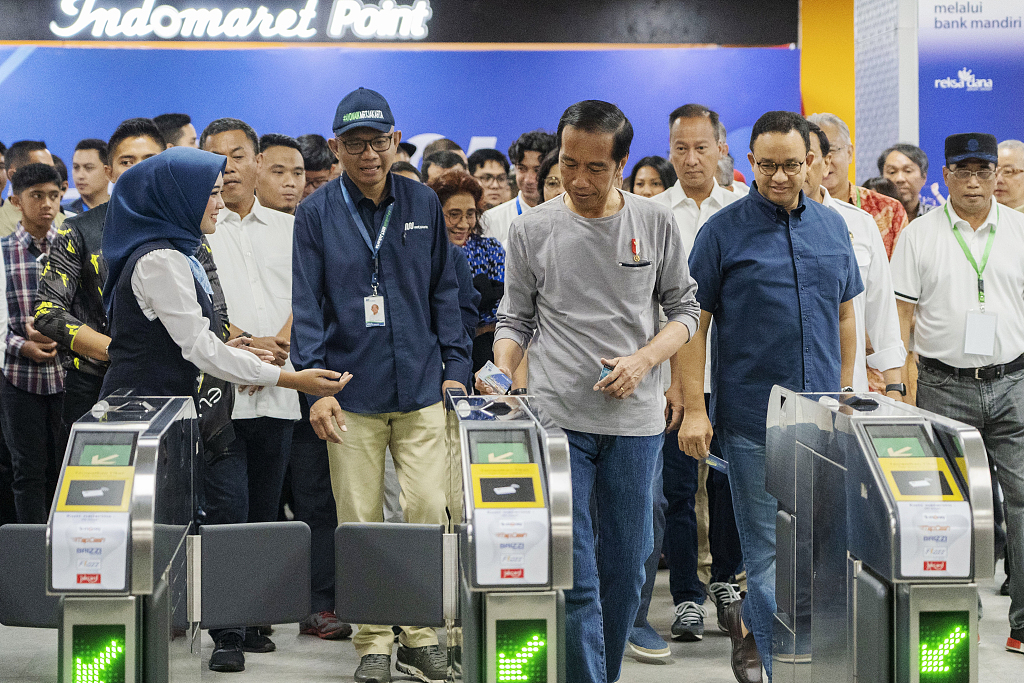 Joko Widodo, Indonesia's president, center, taps a ticket on a fare gate inside the Jakarta Mass Rapid Transit (MRT) Istora-Mandiri station during the inauguration of the rail system in Jakarta, Indonesia, on Sunday, March 24, 2019. (Photo: VCG)

"Today marks the beginning of a new era as the first phase of MRT operations officially begins," Widodo said before hundreds of Jakarta citizens during Car Free Day. In the past 12 days, members of the public have enjoyed the MRT's trial run for free. The MRT will officially start commercial operations on April 1.

Phase 1 of the MRT Jakarta project covers 13 stations along a 15.7-kilometer route from Lebak Bulus terminal in South Jakarta to the Hotel Indonesia traffic circle. The groundbreaking ceremony for the second phase was marked today, which will span 7.8 kilometers, connecting the Hotel Indonesia traffic center to Kota Station, west of Jakarta. The project is expected to be completed by 2024.

The new transportation project cost $6.2 billion, which is covered by a loan from the Japanese International Cooperation Agency. The MRT starts from eight trains transporting 65,000 people a day, but is planned to operate 16 trains that will transport 130,000 people a day. There are also plans to extend the line northward. The administration's overall plan is to create an integrated public transportation system, including MRT, the light rapid transit system, and the airport train.