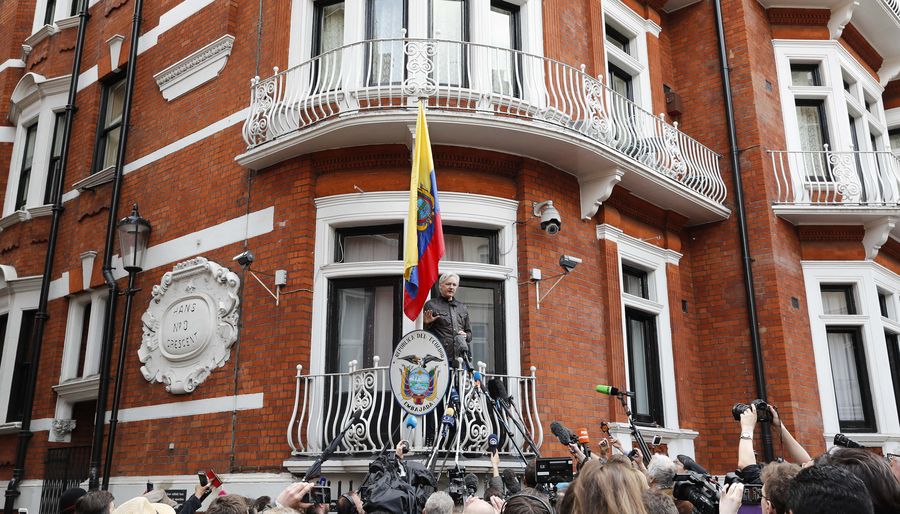 This file photo taken on May 19, 2017 shows Wikileaks founder Julian Assange speaking to a crowd of reporters and supporters from the balcony of the Ecuadorean embassy in London, Britain. (Photo: Xinhua)

PARIS, Feb. 21 (Xinhua) -- Julian Assange, founder of WikiLeaks, may once again seek asylum in France to avoid extradition to the United States where he could face trial over the publication of classified documents, his lawyer Eric Dupond-Moretti said on Friday.

"Article 53 of our constitution allows France to give asylum to a man who is threatened because of freedom of expression," Dupond-Moretti told local broadcaster Europe 1.

Citing a United Nations special report on torture and medical evidence, the French lawyer, a member of Assange's legal team, added the asylum request would be based on health grounds.

He argued that "in addition to physical disturbances, Assange shows all the symptoms of prolonged exposure to psychological torture."

In 2015, Assange asked France to grant him political asylum status, but his request was rejected.

The 48-year-old Australian computer programmer had released, in 2010 through his website WikiLeaks, a batch of US classified information and military reports and documents showing Washington had spied on world leaders.

Assange has resided in the Ecuadorian embassy in London since 2012 to avoid arrest. In 2019, he had been evicted from the embassy and jailed in London for skipping bail. He has remained in prison ever since and risks being sent to the United States to stand trial.

Assange is wanted by the US on 18 criminal counts of conspiring to hack government computers and violating an espionage law. A London court will start hearings on Monday to decide whether Assange should be extradited or not to the United States.