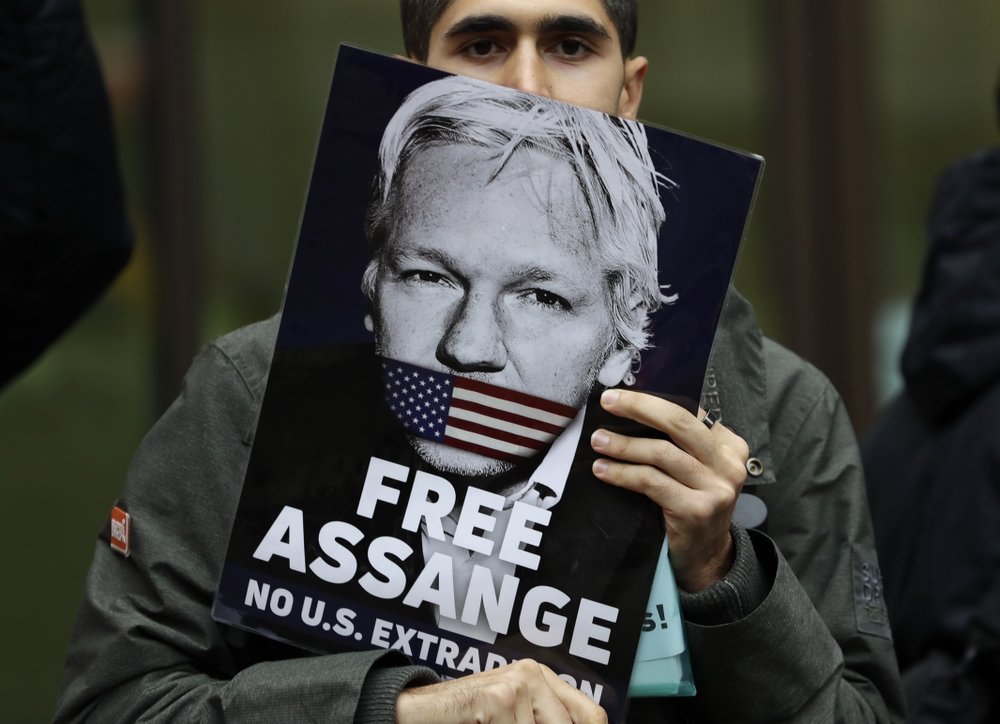 Supporters of Wikileaks founder Julian Assange demonstrate outside Westminster Magistrates' Court in London where Assange is expected to appear as he fights extradition to the United States on charges of conspiring to hack into a Pentagon computer, in London, Monday Oct. 21, 2019. (Photo: AP)

WikiLeaks founder Julian Assange appeared in a UK court Monday to fight extradition to the United States on espionage charges, and he lost a bid to delay proceedings so that his legal team would have more time to prepare his case.

Assange defiantly raised a fist to supporters who jammed the public gallery in Westminster Magistrates Court for a rare view of their hero. He appears to have lost weight but looked healthy, although he spoke very softly and at times seemed despondent and confused.

Assange and his legal team failed to convince District Judge Vanessa Baraitser that a delay in the already slow-moving case was justified. The full extradition is still set for a five-day hearing in late February, with brief interim hearings in November and December.

Assange hadn’t been seen in public for several months and his supporters had raised concerns about his well-being. He wore a blue sweater and a blue sports suit for the hearing, and had his silvery-gray hair slicked back.

After the judge turned down his bid for a three-month delay, Assange said in halting tones he didn’t understand the events in court.

He said the case is not “equitable” because the US government has “unlimited resources” while he doesn’t have easy access to his lawyers or to documents needed to prepare his battle against extradition while he is confined to Belmarsh Prison on the outskirts of London.

“They have all the advantages,” the 48-year-old Assange said.

US authorities accuse Assange of scheming with former Army intelligence analyst Chelsea Manning to break a password for a classified government computer.

Lawyer Mark Summers, representing Assange, told the judge that more time was needed to prepare Assange’s defense because the case has many facets, including the very rare use of espionage charges against a journalist, and will require a “mammoth” amount of planning and preparation

“Our case will be that this is a political attempt to signal to journalists the consequences of publishing information. It is legally unprecedented,” he said.

He also accused the US of illegally spying on Assange while he was inside the Ecuadorian Embassy seeking refuge and taking other illegal actions against the WikiLeaks founder.

“The American state has been actively engaged in intruding into privileged discussions between Mr. Assange and his lawyers in the embassy, also unlawful copying of their telephones and computers (and) hooded men breaking into offices,” he said.

He did not provide evidence of these charges, which likely would be part of Assange’s defense against extradition when the full hearing is held next year.

Summers said the initial case against Assange was prepared during the administration of former President Barack Obama in 2010 but wasn’t acted on until Donald Trump assumed the presidency. He said it represents the administration’s aggressive attitude toward whistleblowers.

Summers asked for a three-month delay to the full hear but was rebuffed after lawyer James Lewis, representing the US, said the US opposed any delay to the proceeding.

The public gallery was jammed with Assange supporters, including former London Mayor Ken Livingstone, and outside the courthouse others carried placards calling for Assange to be released. There were chants demanding he be freed.

The judge said the full hearing will be heard at Belmarsh Court, which is adjacent to the prison where Assange is being held. She said this would be easier for Assange to attend and contains more room for the media.

Assange’s lawyers said the five days wouldn’t be enough for the entire case to be heard. They are expected to ask for more time at a later date.

Assange claims he is a journalist entitled to First Amendment protection.

A number of media freedom groups have said the use of espionage charges against Assange represents a threat to all journalists.