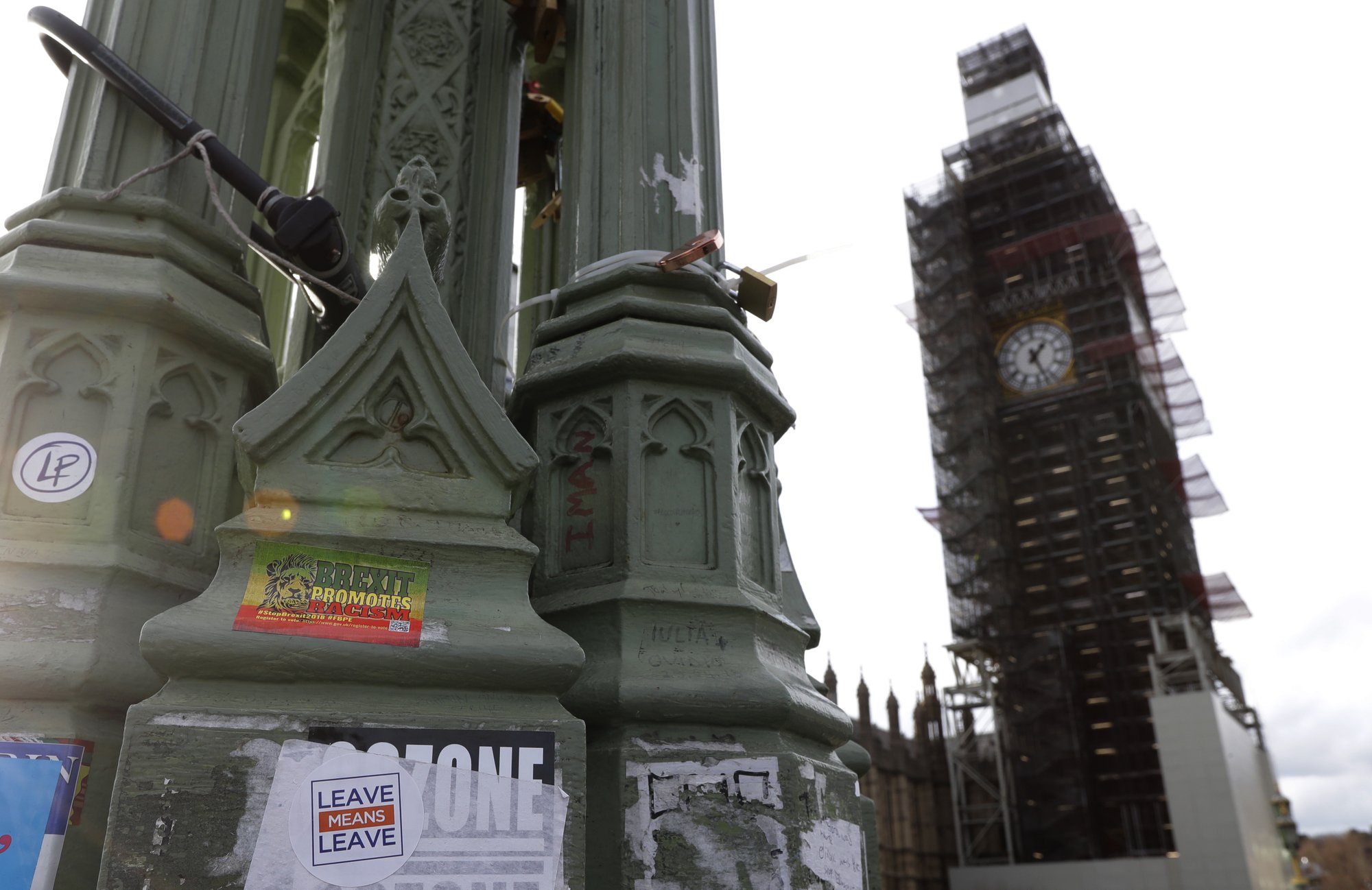 Britain’s Parliament is crumbling — shored up by scaffolding, patched by endless repairs. And after a week of upheaval over Brexit in the House of Commons and angry exchanges on the streets outside, Britain’s democratic system is looking a bit shaky, too.

In the Commons chamber, Prime Minister Theresa May suffered the biggest defeat in Parliament’s history over her European Union divorce deal, narrowly survived a no-confidence vote the next day and was left scrambling for a workable new Brexit plan.

Outside, rival protesters sounded off and squared off, with some aiming angry shouts of “traitor” at their opponents.

Brexit has divided Britain, and left the country’s democratic system battered, if not broken.

Soon after he spoke, lawmakers rejected the deal May’s government had painstakingly negotiated with the EU by 432 votes to 202, the biggest margin of defeat any British government has ever suffered.

The next day, Parliament held a no-confidence vote in the government called by Labour. May sat stony-faced as Labour deputy leader Tom Watson savagely said she lacked “the empathy, the ability and, most crucially, the policy to lead this country any longer.”

May survived by fewer than 20 votes, and ended the week clinging to office, holding talks with allies and opposition politicians in an attempt to forge a “Plan B” that must be presented on Monday.

But Parliament’s Brexit factions are still deadlocked, with competing plans and no clear majority for any of them.

Steven Fielding, a professor of political history at the University of Nottingham, said Brexit has paralyzed the UK’s parliamentary system.

“I cannot think of a moment in modern British politics that is at all comparable,” he said. “Maybe when (Prime Minister Robert) Peel split with his own party over the Corn Laws in 1846.

“The whole point of Britain’s parliamentary system used to be that — in contrast to continental (European) countries — we elect majority governments that make decisions,” he said. “There was none of this messy compromise stuff. ... And (now) it is failing.”

Britain’s political crisis has been building since the 2016 Brexit referendum that resulted in a narrow vote — 52 to 48 percent — for Britain to leave the EU. An election the following year — called to cement the power of May’s Conservatives — saw them lose their majority in Parliament, leaving her atop a fragile minority administration that struggles to pass legislation.

In a further complication, Brexit has split the main political parties, Conservatives and Labour, right down the middle. Each party includes both pro-Brexit and pro-EU factions, divided into multiple sub-categories: clean-break “hard Brexiteers” who want a firm break with the EU; those who support keeping close ties to the bloc; and those who back holding a second EU membership referendum.

May will show lawmakers her revised Brexit blueprint on Monday, and they will try to amend it and seize control of the Brexit negotiations during a debate in the House of Commons on Jan. 29.

But is not clear what policy, if any, can find majority support.

Meanwhile, Britain draws ever closer to an abrupt and potentially chaotic “no-deal” departure from the bloc on March 29.

Watching this epic political spectacle lurching forward each day, Britons are bored, bemused, angry and afraid — sometimes all at the same time. And the country is still as divided over its relationship with Europe as they were during the referendum campaign.

“Brexit or a penalty shootout? The choice is yours ... I know where we’ll be,” soccer commentator Gary Lineker said Wednesday night when May’s latest televised speech collided with the end of an exciting FA Cup game.

All week, pro-Brexit and pro-EU demonstrators gathered outside Parliament in London to trade chants, arguments — and, in a small number of cases, abuse.

“We’re praying and hoping for common sense and cool heads to prevail amongst MPs (members of Parliament),” Keane said, holding a British Union Jack alongside an EU flag.

Standing just yards away, pro-Brexit painter-decorator Thomas Prior was adamant that Parliament must do the exact opposite, and walk away from the EU without a deal.

“It’s going to happen — because if it doesn’t, it’ll be the end of democracy,” he said. “Two years ago we voted to leave the European Union. We’ve had two wasted years.”

Away from the drama in Parliament, which dominated the week’s news broadcasts, many voters just want politicians to sort something out. In Romford, a heavily pro-Brexit district of east London, market trader Olubunmi Akande said he was disappointed in lawmakers who had blocked May’s EU divorce deal.

But Fielding said he doubted Britain’s rigid political system was up to the task of compromise.

“There aren’t enough MPs who’ve got the bravery or the principles — or the stupidity — to actually put their heads above the parapet in order to come to an agreement,” he said. “We’ve got a group of politicians who are unable to think themselves into another political culture.”