A wildfire near the French Riviera killed two people and was burning out of control Wednesday in the forests of the popular region, fueled by wind and drought. Over 1,100 firefighters were battling the flames and thousands of tourists and locals were evacuated to safer areas. 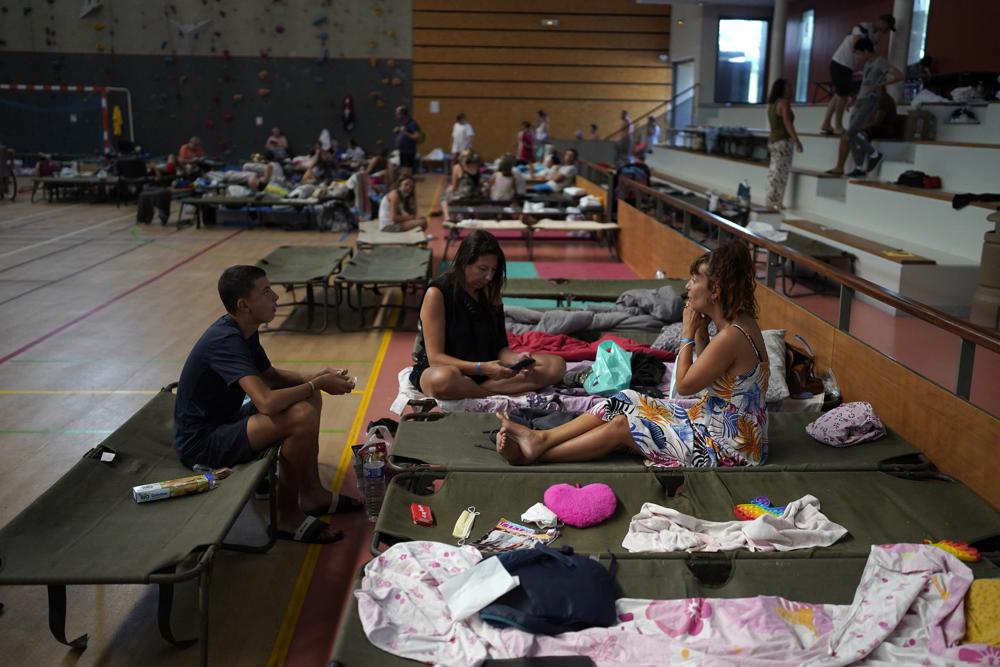 The fire started Monday evening 40 kilometers (24 miles) inland from the coastal resort of Saint-Tropez. Whipped up by powerful seasonal winds coming off the Mediterranean Sea, the fire had burned 7,000 hectares (17,300 acres) of forest by Wednesday morning, local officals said.

The prefect of the Var region, Evence Richard, told reporters that two people were killed. The local prosecutor said the bodies were found in a home that burned down near the town of Grimaud. An investigation has been opened to formally identify the victims.

The French newspaper Var-Matin identified one victim as a man.

At least 27 people, including five firefighters, have suffered smoke inhalation or minor injuries from the blaze, the prefecture of the Var region said. Authorities closed a highway north of the fire area on Wednesday afternoon due to the thick smoke.

The wildfire has forced more than 7,000 people to flee homes, campgrounds and hotels, sending them to sleep in temporary shelters, according to the prefecture. Among them were over 1,000 people who stayed around a gym in the seaside resort of Bormes-Les-Mimosas where authorities supplied food and water.

Vassili Bartoletti and his family, who are from northeastern France, were evacuated early Tuesday from a campground where they had been vacationing.

"Around midnight, someone knocked at our door and told us to take our belongings and leave. At the end of the alley, we could see the red flames," he told The Associated Press. "So we left hastily."

Bartoletti said his 6-year-old son was "very anxious" about the fire.

"I showed him the map. I showed him we were far away, that we've been moved to a safe place" in Bormes-Les-Mimosas, he said.

Last month, while the family was on vacation on the Italian island of Sardinia, a major blaze there for three days threatened the town where they had rented a house. They did not have to evacuate but endured smoke in the air and saw water-dumping planes and helicopters going back and forth repeatedly.

French President Emmanuel Macron, who has been vacationing in a nearby coastal fortress, visited the fire zone on Tuesday and praised the firefighters for their work.

Wildfires have swept across the Mediterranean region in recent weeks, leaving areas in Greece, Turkey, Italy, Algeria and Spain in smoldering ruins. In Greece on Wednesday, a major wildfire northwest of Athens, the capital, decimated large tracts of pine forest for a third straight day.

In neighboring Albania, hundreds of hectares (thousand of acres) have burned over the last month. Police reported Wednesday that a former deputy minister has been arrested for arson.

In Spain, authorities in the central region of Castilla y León said firefighters had established a perimeter around a blaze that has consumed at least 12,000 hectares (29,650 acres) this week. A fire on the Canary Islands was also brought under control after singeing 300 hectares (740 acres) of farmland.

While the Mediterranean is known for its sunny, hot summers, scientists voice little doubt that climate change from the burning of coal, oil and natural gas is driving extreme events such as heat waves, droughts and wildfires. Such hardships are likely to happen more frequently as the Earth continues to warm, they say.