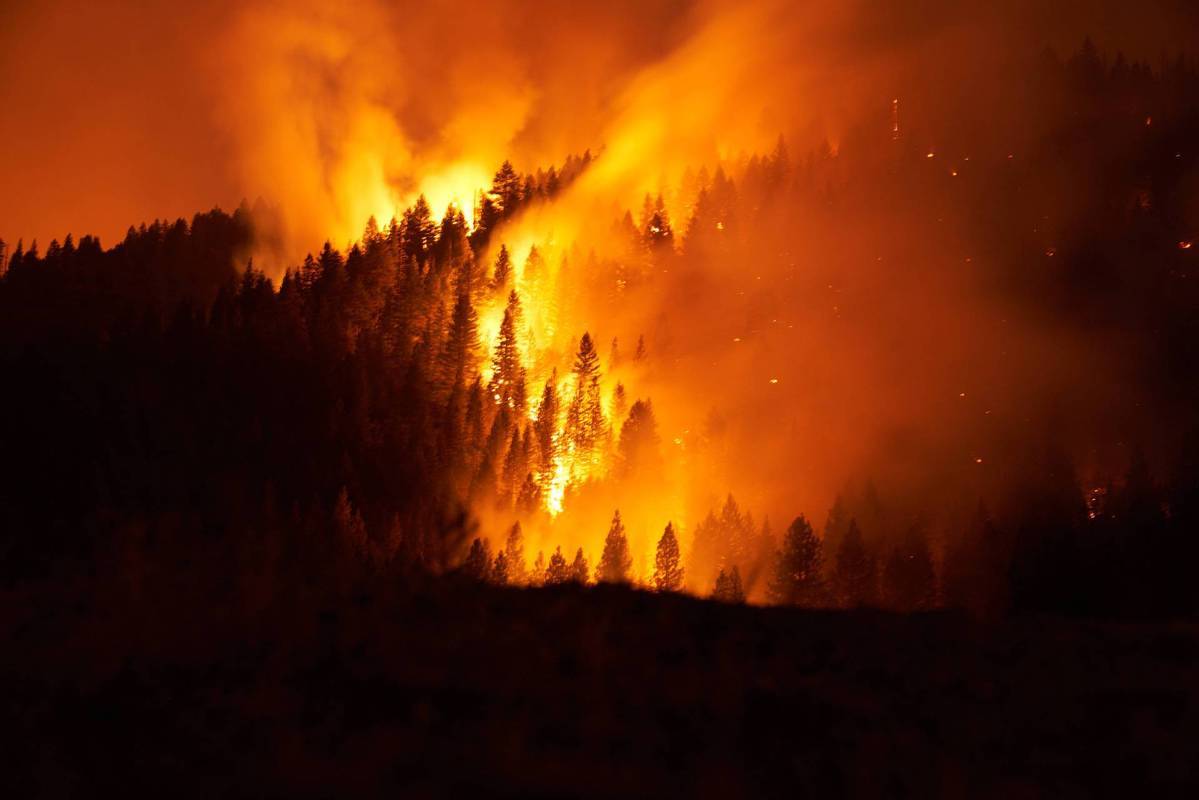 The Dixie Fire pushes through the Genesee Valley on Aug 21, 2021 in Genesee, California. (Photo: Agencies)

California is entering its most dangerous wildfire months, with more than 1 million acres already burned, setting the stage for another severe fire season.

"The unfortunate thing is that these fires continue to get bigger, but we're surging resources into communities to protect and reduce the impact," said Thom Porter, director of California's Forestry and Fire Protection Department (Cal Fire) at a news conference last week.

More than twice as many acres in California have been engulfed by fires in the first half of this year compared with the same period last year, which set the record for most acreage burned. This is even before the arrival of autumn, a time in California that is marked with frequent wildfires, bone-dry air and strong offshore winds.

The more than a dozen wildfires in California are among the 99 large fires currently burning in the US. The fires have burned 2.5 million acres across 12 states, according to the National Interagency Fire Center.

The fires are largely concentrated in states in the Western part of the US: Washington, Idaho, Oregon, Utah, Montana and California. Montana, which is fighting 24 blazes, currently has the largest number of wildfires. It is followed by Idaho with 21 and Washington with 19.

A total of 6,630 wildfires have raged through California since Jan 1, devouring more than 1.4 million acres, destroying thousands of structures including homes and businesses, and forcing tens of thousands of residents to evacuate.

Nearly 37,000 people have had to flee their homes due to the wildfires, according to the California governor's emergency services office. Pacific Gas & Electric, the state's largest utility, cut off power to around 48,000 customers on Aug 17 to prevent power lines from sparking during extremely hot weather.

The Dixie Fire, the second-largest fire in the state's history, started on July 13 and continues to ravage the counties of Butte, Plumas, Lassen, Tehama and Shasta in Northern California. The blaze had ballooned to 705,000 acres as of Friday evening, an area more than double the size of Los Angeles, with only 35 percent containment, Cal Fire said.

The blaze nearly leveled the historic town of Greenville on Aug 4 and turned its roughly 1,000 residents into wildfire refugees. It is moving closer to the communities of Janesville and Susanville in Lassen County, where around 18,000 people reside.

"We have a very large part of our county right now that is under mandatory evacuation order and evacuation warning," said Lisa Bernard, a spokesperson for the Lassen County Sheriff's Office, at a community meeting Aug 19.

Around 60 miles east of the state capital Sacramento, the Caldor Fire, which exploded from 400 acres to 75,845 acres in fewer than seven days with 0 percent contained, has officials in the El Dorado County racing to evacuate residents in the surrounding communities. The Los Angeles Times reported Sunday that the Caldor was nearing 100,000 acres, having burned more than 15,000 acres over the weekend. But winds that have fanned the fire are expected to diminish, fire officials said.

The fire emerged Aug 14 in El Dorado National Forest and nearly destroyed Grizzly Flats, a town of around 1,200 residents, and threatened 15,000 other structures.

Meanwhile, a grass blaze that started around 80 miles north of San Francisco on Aug 18 has moved so rapidly that it burned at least two dozen structures to ashes by the next day. That wildfire has been dubbed the Cache Fire and was 45 percent contained Friday evening.

In Central California, the French Fire erupted as a 900-acre brush fire Wednesday in the Kern River Valley but has already encroached 3,223 acres by Friday afternoon. It is 0 percent contained.