Firefighters battling flames in Northern California forests girded Monday for new bouts of windy weather, and a utility warned thousands of customers it might cut their electricity to prevent new fires from igniting if gusts damage power lines. 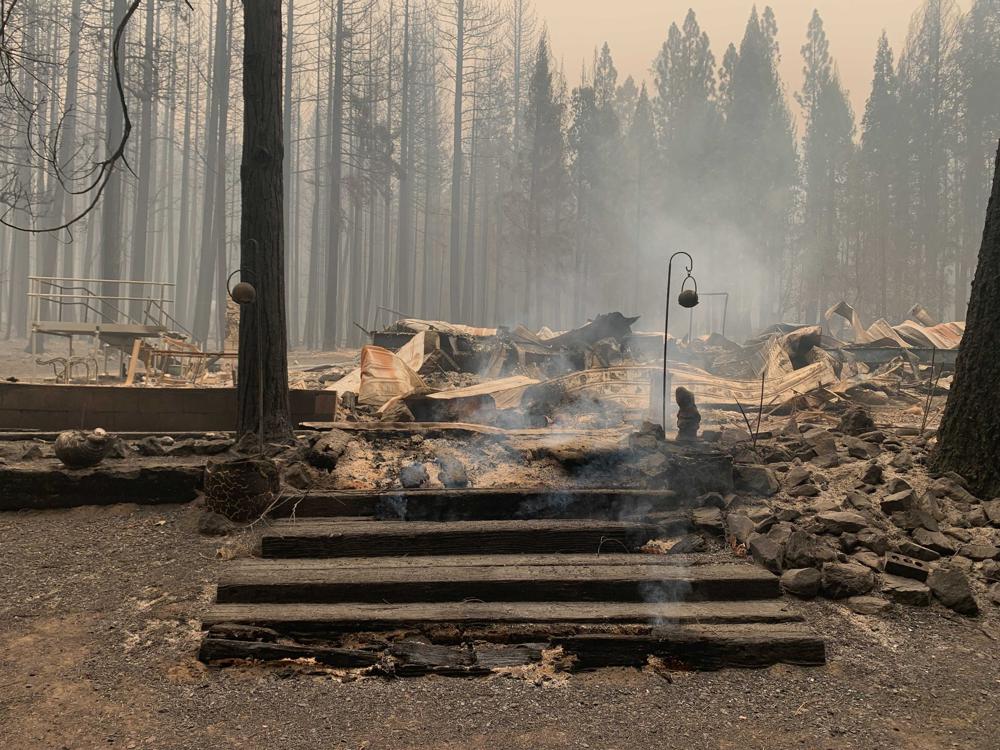 Smoke comes out under the front steps of a house that burned along North Arm Road in Plumas County near Taylorsville, Calif., Sunday, Aug. 15, 2021. (Photo: AP)

Conditions that suppressed the huge Dixie Fire overnight were expected to give way late in the day to winds that could push flames toward mountain communities in a region where drought and summer heat have turned vegetation to tinder.

“In this environment any type of wind, no matter what direction — especially the way the fire’s been going — is a concern for everyone,” said information officer Jim Evans.

Growing explosively at times, the Dixie Fire has scorched 890 square miles (2,305 square kilometers) in the northern Sierra Nevada and southern Cascades since it ignited on July 13 and eventually merged with a smaller blaze called the Fly Fire.

Ongoing damage surveys have counted more than 1,100 buildings destroyed, including 625 homes, and more than 14,000 structures remained threatened. Numerous evacuation orders were in effect.

Investigations are continuing, but Pacific Gas & Electric has notified utility regulators that the Dixie and Fly fires may have been caused by trees falling into its power lines. The Dixie Fire began near the town of Paradise, which was devastated by a 2018 wildfire ignited by PG&E equipment during strong winds. Eighty-five people died.

On Sunday evening, PG&E notified 39,000 customers in parts of 16 Northern California counties that it may have to shut off power Tuesday evening due to a forecast of dry winds out of the northeast.

“Given this wind event and current conditions including extreme to exceptional drought and extremely dry vegetation, PG&E has begun sending 48-hour advance notifications to customers in targeted areas where PG&E may need to proactively turn power off for safety to reduce the risk of wildfire from energized power lines,” a statement said.

The Dixie Fire was among 97 large, active wildfires burning in the United States on Monday, the National Interagency Fire Center said. More than 25,000 firefighters, support personnel and management teams were assigned to the blazes.

The U.S. Forest Service said last week that it is operating in crisis mode, with more than double the number of firefighters deployed than at the same time a year ago.

The fires were also taking a toll on wildlife.

Near Taylorsville, California, some firefighters on Sunday were monitoring a bear cub who was possibly orphaned in the Dixie Fire. The emaciated cub was awaiting extraction from the fire-scarred area by a wildlife rescue team.

“Generally if you see them with a sow or a mother bear, they’ll stay with the mother bear and run off,” said firefighter Johnnie Macy, who was deployed from Golden, Colorado. “This bear hasn’t done that, so because of that we think that the bear’s orphaned as a result of the fire.”

Climate change has made the U.S. West warmer and drier in the past 30 years and will continue to make the weather more extreme and wildfires more destructive, according to scientists.