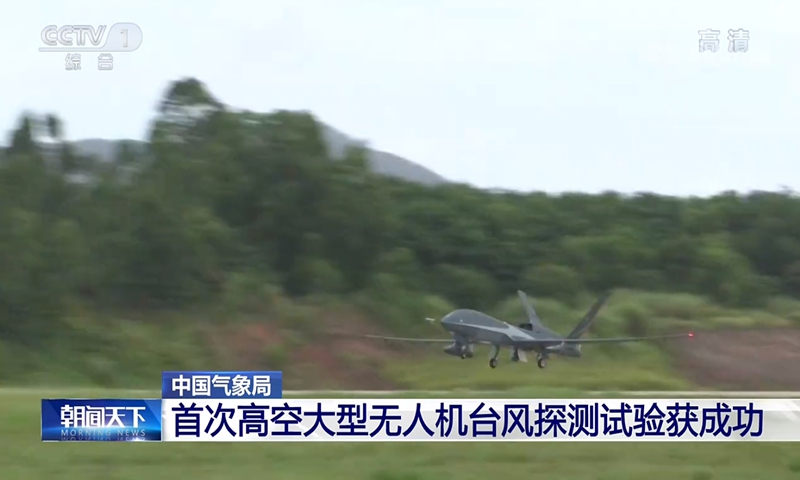 During the typhoon detection test flight, the Wing Loong-10 drone took off from Bo'ao Airport in South China's Hainan Province, dropped 30 sondes from an altitude of 10,000 meters, and conducted a multidimensional scan of Typhoon Sinlaku together with its millimeter wave radar, as observation data on factors including temperature, humidity, atmospheric pressure and hydrometeors was sent back to the ground in real time, China Central Television (CCTV) reported on Tuesday.

Typhoons cause 29.5 billion yuan ($4.22 billion) in economic losses to China every year, and drones have the potential to significantly improve typhoon forecasts, reports said.

Built by Chengdu Aircraft Industrial (Group) Co Ltd under the state-owned Aviation Industry Corporation of China (AVIC), the Wing Loong series drones are well-known for their military applications. The designation of the Wing Loong-10 was not immediately found in previous reports.

According to an AVIC statement released on the company's WeChat account on Tuesday, the Wing Loong-10 can also conduct military operations including optical, electronic and armed reconnaissance.

The Cloud Shadow is a high-altitude high-speed multifunction drone installed with a high-end turbojet engine. It can conduct rapid and extensive intelligence gathering and long-distance precision land/sea attacks, AVIC said in a statement sent to the Global Times in 2017.

In addition to its striking resemblance to the Cloud Shadow, the Wing Loong-10 also seems to use a turbojet engine, while most other Wing Loong series drones use turboprop engines, a drone industry expert told the Global Times on Tuesday.

The Wing Loong series and the Cloud Shadow drones are all available on the international market.

This particular Wing Loong-10 built for typhoon detection purposes is likely still in its development phase, and more tests will also likely be conducted for its other functions, the expert said.