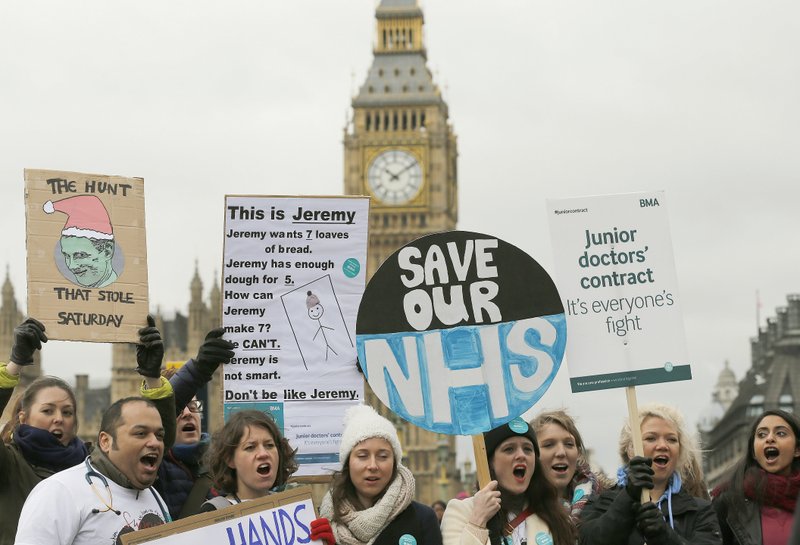 This winter, a daily drip of grim stories from Britain’s health care system has triggered a flood of alarm.

An 81-year-old woman with chest pains died while waiting four hours for an ambulance. A young woman in pain lay for five hours on a hospital floor. Patients across the country have been treated in corridors or stuck in ambulances because there are no free hospital beds.

These are not the usual winter aches and pains of a health service in heavy demand, medics and experts say, but a nationwide crisis triggered by years of underfunding. And Britain’s decision to leave the European Union next year is making the situation worse for the National Health Service, a state-funded system that’s both revered and criticized.

Few institutions are more central to British life than the NHS, founded in 1948 in a country determined to build a fairer society out of the ruins of war. It remains a source of pride for many that Britain provides free health care to all, funded through taxation. Politicians from across the political spectrum extol the NHS and pledge to support it.

It’s also an unwieldy behemoth that employs more than 1 million people and struggles to cope with rising demand. This winter has brought a perfect storm of pressures, as the worst flu season in several years and a bad outbreak of winter vomiting bug exacerbated the effects of a long-term funding squeeze. Authorities have had to cancel thousands of operations and delay treatments, causing mounting anger among patients and staff.

Glynis Murphy, an academic in southern England, phoned for an ambulance earlier this month for her son, who had worsening abdominal pain for two days.

“I could hear my son upstairs shouting in pain. At the end of all this, (the dispatcher) said they couldn’t send an ambulance. I was utterly shocked,” she said.

Murphy drove her son to a hospital, where doctors found a ruptured appendix and operated. The ambulance service expressed regret but said there had been no ambulances to send due to high demand.

Stories like Murphy’s have become commonplace. Partly, the problem is money. Since Britain’s Conservative-led government introduced spending cuts in 2010 in the wake of the global financial crisis, NHS funding has grown about 1 percent a year. But demand is growing some 4 percent, as the British population gets larger and older.

Most British hospitals routinely miss targets such as a promise to treat 95 percent of emergency-room patients within four hours.

Brexit has brought new complications. Britain’s vote in June 2016 to leave the 28-nation EU — and end the automatic right of EU citizens to live in the U.K. — threw the future of 3 million Europeans in Britain into doubt. That has prompted some to leave and deterred other Europeans from moving in.

That has made it harder to recruit EU medical staff, who make up about 5 percent of NHS employees.

The Nursing and Midwifery Council says in the year to September 2017, the number of European nurses and midwives joining the U.K.’s professional register fell 89 percent while the number leaving rose 67 percent.

Joan Pons Laplana, a nurse in Great Yarmouth in eastern England, said the combination of staff shortages, a heavier workload and stagnating public-sector salaries means “levels of sickness and stress have gone through the roof” for NHS employees.

The Spanish-born nurse, who has worked in Britain for 17 years, says he feels “completely betrayed” by the Conservative government, which declined for months to guarantee the rights of EU citizens in Britain. A deal with the EU on citizens’ rights was eventually agreed upon in December.

“The government has made me feel very unwelcome and unvalued,” he said.

While many of his European colleagues have decided to leave Britain, Pons Laplana, who has a British wife and three children, is torn.

“Every day I’m thinking, what will I do? Will I leave? But for me, it is not that easy,” he said.

Health funding has also become entangled in the tug-of-war between Brexit supporters and opponents.

Before the 2016 Brexit referendum, the “leave” campaign plastered a bus with the eye-catching — and inaccurate — claim that Britain sends the EU 350 million pounds ($495 million) a week that could instead go to the NHS. (The net figure Britain sends is about half that).

Anti-EU politicians including Foreign Secretary Boris Johnson still argue there will be a “Brexit dividend” once the U.K. stops paying into the EU budget, and that can be spent on the NHS.

Politicians agree something must be done — but argue bitterly about what that is.

Opposition Labour Party leader Jeremy Corbyn called last week for 5 billion pounds ($7.1 billion) in emergency spending to “save the NHS from death by a thousand cuts.”

Prime Minister Theresa May acknowledged that the health service was experiencing “winter pressures” but said the government was already putting more money into the system and recruiting more doctors and nurses.

Many experts say the problems go deeper than money.

Siva Anandaciva, chief analyst at health charity the King’s Fund, said Britain needs to think about “fundamental changes to how we deliver care.”

But big changes — whether fees, higher taxes or major restructuring — are politically unpalatable.

“You can’t just keep pumping more funding into the NHS,” Anandaciva said. “You have to make some hard choices ... at some point, the love for the NHS may become a barrier to change.”