Winter's wrath: Bitter cold, no power and a deadly tornado

At least three people were killed when a tornado tore through a seaside town in North Carolina, one of many wild and deadly impacts from a sprawling blast of winter weather across the United States. Millions of people remained without power Tuesday amid subfreezing temperatures, and authorities warned of treacherous travel conditions in many states. 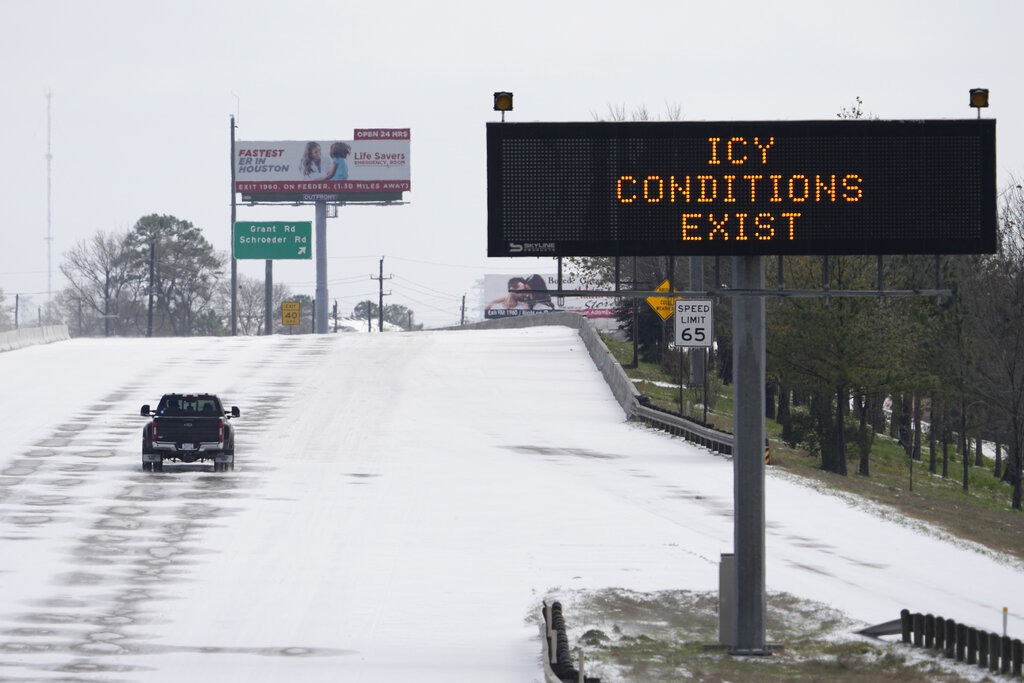 The massive winter storm that immobilized the Southern Plains was heading to the eastern Great Lakes and New England, where heavy snow and freezing rain was expected Tuesday, the National Weather Service said.

The storm system left behind record-setting cold temperatures with wind-chill warnings extending across the nation's midsection, from Canada into Mexico, and another wave of snow and ice was predicted late Tuesday and Wednesday along a storm front extending deep into the South.

The worst U.S. outages were in Texas, affecting more than 4 million homes and businesses Tuesday. More than 250,000 people lost power across parts of Appalachia, and another quarter-million were still without electricity following an ice storm in northwest Oregon, according to poweroutage.us, which tracks utility outage reports. Another 4 million people lost power in Mexico.

Outside of Texas, rolling two-hour blackouts have begun to ease the extreme demand for heat and electricity. In Oklahoma, more than 130,000 homes and businesses were affected. The Southwest Power Pool, a group of utilities covering 14 states, said the outages were “a last resort to preserve the reliability of the electric system as a whole.”

The blackouts forced a Texas county to scramble to get more than 8,000 doses of Moderna’s coronavirus vaccine into arms. The Harris County Public Health facility lost power after 1 a.m. on Monday and its backup generator also failed, said Rafael Lemaitre, a spokesman for Harris County Judge Lina Hidalgo.

Looking for large groups of people in places where they wouldn't have to drive and with appropriate medical personnel on hand, county officials distributed the doses at three hospitals, Rice University and the county jail.

“It feels amazing. I’m very grateful,” said Harry Golen, a 19-year-old sophomore who waited for nearly four hours with his friends, much of it in the frigid cold, and was among the last people to get the shots, which otherwise wouldn’t have reached students until March or April.

Hidalgo, the top elected official in Houston, said she didn't believe any of the vaccines were lost. But the worsening conditions also delayed vaccine deliveries. More than 400,000 additional vaccine doses due in Texas now won’t arrive until Wednesday at least, officials said.

The tornado in Brunswick County, N.C., killed 3 people and injured at least 10 as it tore through a golf course community and another rural area just before midnight Monday, destroying dozens of homes. Gov. Roy Cooper said rescue operations were continuing Tuesday.

Authorities in multiple states reported deaths in crashes on icy roads from this weather front, including two people whose vehicle slid off a road and overturned in a waterway in Kentucky on Sunday, state police said.

Deaths in Texas included a woman and a girl died from suspected carbon monoxide poisoning in Houston, at a home without electricity from a car running in an attached garage, police said. Law enforcement also said subfreezing temperatures were likely to blame for the deaths of two men found along Houston-area roadways.

With more frigid days expected, frustration mounted over power outages that weren't expected to be resolved until later Tuesday at the earliest in Texas, where surging demand and the loss of some power stations in the cold overwhelmed the power grid, forcing blackouts typically only seen in 100-degree Fahrenheit (38-degree Celsius) summers.

More than 500 people were hunkering down at one shelter in Houston, but Mayor Sylvester Turner said other warming centers had to be shut down because those locations, too, lost power.

In Kansas, where wind chills dropped to as low as minus 30 degrees Fahrenheit (minus 34 degrees Celsius) in some areas, Gov. Laura Kelly declared a state of disaster.

Most government offices and schools were closed for Presidents Day, and authorities pleaded with residents to stay home. Louisiana State Police reported that it had investigated nearly 75 weather-related crashes caused by a mixture of snow, sleet and freezing rain in the past 24 hours.

Air travel was also affected. By midmorning, 3,000 flights had been canceled across the country, more than half of them in Texas. At Dallas/Fort Worth International, the temperature was 4 degrees Fahrenheit (-15 degrees Celsius), colder than Moscow.

Northern Louisiana is in the bullseye for the highest amounts of freezing rain from the incoming system, forecasters said in a Tuesday briefing, and more than a foot (30 centimeters) of snow was possible in Arkansas, according to the federal Weather Prediction Center.

About 100 school systems closed, delayed opening or switched to remote classes on Tuesday in Alabama, where forecasters said conditions might not improve in some places until temperatures rise above freezing Wednesday afternoon.