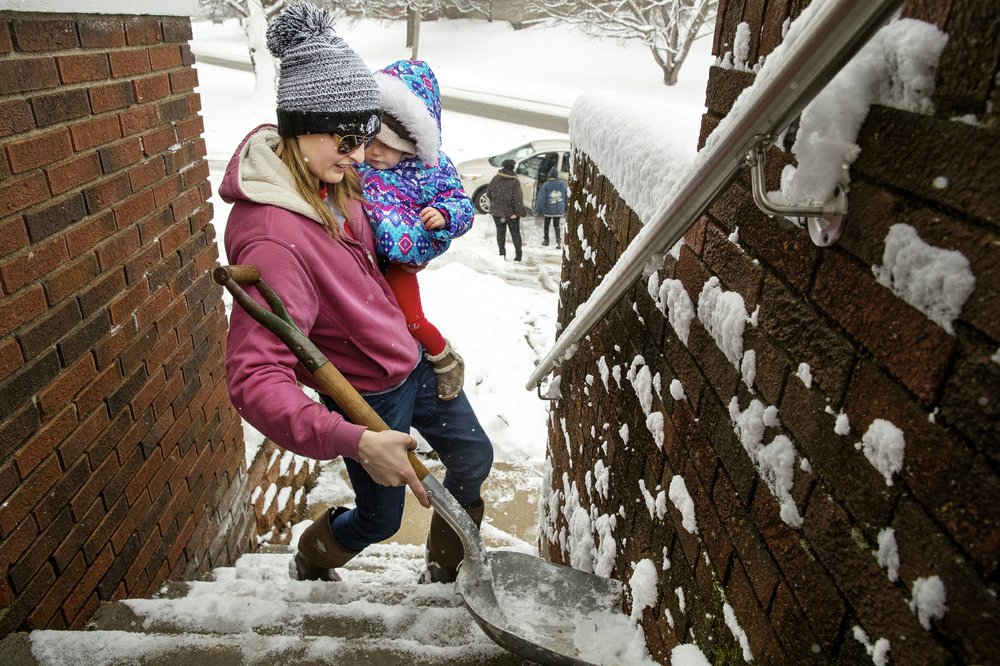 Morgan Miller shovels snow from the front steps of her home on January 13, 2019. (Photo:AP)

A winter storm that contributed to at least five deaths in the Midwest pummeled the mid-Atlantic region for a second day Sunday, bringing with it an icy mix that knocked out power, cancelled flights, and contributed to hundreds of car accidents.

Virginia State Police said the driver of a military surplus vehicle was killed late Saturday after he lost control on Interstate 81 due to slick road conditions.

Police said Ronald W. Harris, 73, of Gainesville, Georgia, died after his vehicle was struck by two tractor-trailers. The two tractor-trailer drivers were taken to a local hospital for injuries that were not considered life-threatening. The state medical examiner was expected to determine later whether Harris’ death was storm-related.

Virginia State Police said they responded to more than 230 traffic crashes and helped more than 100 disabled vehicles in Virginia from midnight to noon Sunday.

The storm knocked out power for nearly 200,000 people in Virginia and North Carolina on Sunday, according to PowerOutage.us.

The wintry mix was also causing problems at airports in the region, including more than 250 flight cancellations Sunday at the three main airports serving the nation’s capital.

The storm caused a variety of cancellations and closings.

The Maryland Zoo was closed to the public, with only essential employees told to report to work. The Washington Metropolitan Area Transit Authority cancelled its planned track work for the weekend and reopened three rail stations due to the weather conditions.

In Baltimore, a man was fatally shot as he shoveled snow early Sunday morning. Police said a 43-year-old man was outside shoveling at 4:40 a.m. when an unidentified suspect shot him in the shoulder and head. He died at a local hospital.

The National Weather Service reported close to a half-inch of ice in some sections of western North Carolina, leading to fallen trees and power lines. The remainder of the state received mostly a cold rain or freezing precipitation that caused few problems

The storm was expected to continue into Sunday evening.