WORLD With no new talks, LA teacher strike all but inevitable

With no new talks, LA teacher strike all but inevitable 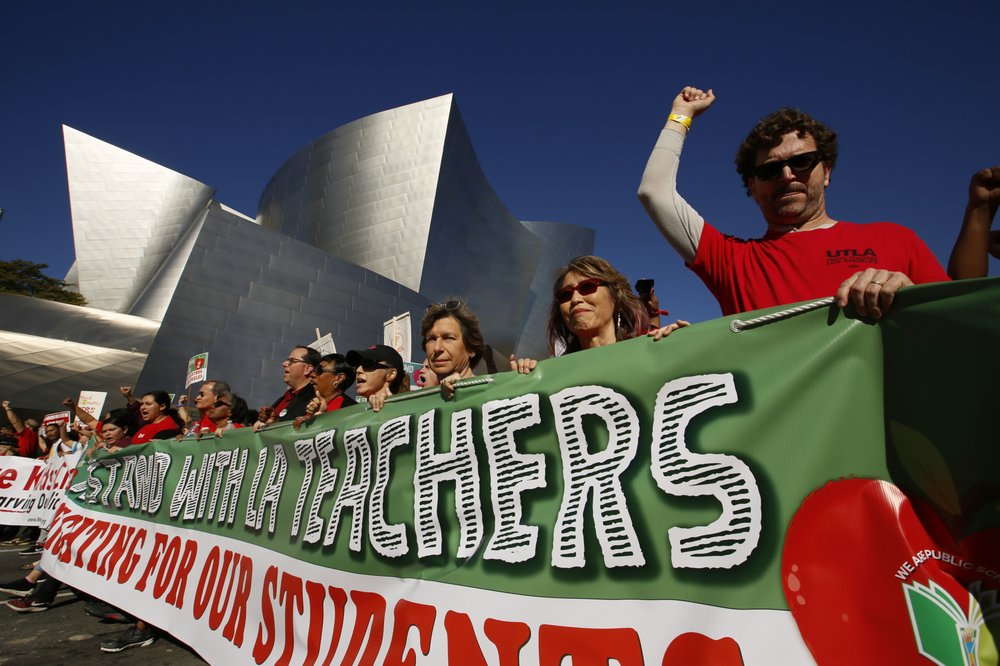 Thousands of teachers rally against the mation's  second-largest school district in downtown Los Angeles on December 15, 2018. The teachers' union rejected a new offer Friday from the LA Unified School District after hours of talks. With no new talks scheduled, pickets are likely to begin at 7 am as teachers push for a raise and lower class sizes. (Photo: AP)

A massive teachers strike in Los Angeles, the nation’s second-largest school district, is all but inevitable starting Monday after the two sides did not renew negotiations over the weekend.

Talks broke down Friday when the teachers’ union rejected as “woefully inadequate” a new offer from the LA Unified School District.

With no new discussions scheduled, pickets are likely to begin at 7 a.m. as teachers stand firm on sticking points including higher pay and smaller class sizes.

Schools will stay open if a walkout happens. The district, with 640,000 students, has hired hundreds of substitutes to replace teachers and others who leave for picket lines.

The union has said it was “irresponsible” to hire subs and called on parents to consider keeping students home or join marchers if a strike goes forward.

The district’s latest offer included adding nearly 1,200 teachers, counselors, nurses and librarians to schools, reducing class sizes by two students, and capping class sizes to between 32 and 39 students, depending on age and curriculum.

The offer also included the district’s previously proposed 6 percent salary increase over the first two years of a three-year contract.

The union, United Teachers Los Angeles, wants a 6.5 percent hike that would take effect all at once and be retroactive to fiscal 2017. Union officials said some of the district’s proposals would expire after a year, calling it disrespectful.

“We are at an impasse,” union president Alex Caputo-Pearl said Friday.

District officials said it was imploring the union to reconsider, adding that it rejected the new offer without proposing a counteroffer.

“A strike will harm the students, families and communities we serve, and we have a responsibility to resolve the situation without a strike,” the district tweeted.

A majority of UTLA’s 35,000 members are expected to join the work stoppage.

Abram van der Fluit, a Los Angeles teacher opposed to the strike, said in a statement Sunday that colleagues who agree with him are “fearful” of speaking out against the union. He’s a former UTLA member and currently part of the California Teachers Empowerment Network, which describes itself as a nonpartisan information source for teachers and the public.

“I don’t support the rationale for the strike as articulated by UTLA,” he said. “I don’t believe that the reasons for the strike should be our priorities, as teachers.”

Van der Fluit, a 20-year LAUSD veteran who teaches high school biology, said the union should prioritize other issues including creating access to vocational education classes and providing options for students who want to pursue careers that don’t necessarily require a college degree.

Much of the acrimony between the district and the union centers around the new superintendent, Austin Beutner. The investment banker and former Los Angeles deputy mayor took the job last year without any experience in education.

The union argues that Beutner is trying to privatize the district, encouraging school closures and flipping public schools into charter schools. Charters are privately operated public schools that compete with the school system for students and the funds they bring in.

Beutner has said his plan to reorganize the district would improve services to students and families.

The teachers are tapping into a shift in public sentiment that supports better wages for educators that came with a “Red4Ed” movement that began last year in West Virginia, where a strike resulted in a raise. The movement spread to Oklahoma, Kentucky, Colorado, Arizona and Washington state.