WORLD With no summit, Moon to skip Olympics

With no summit, Moon to skip Olympics 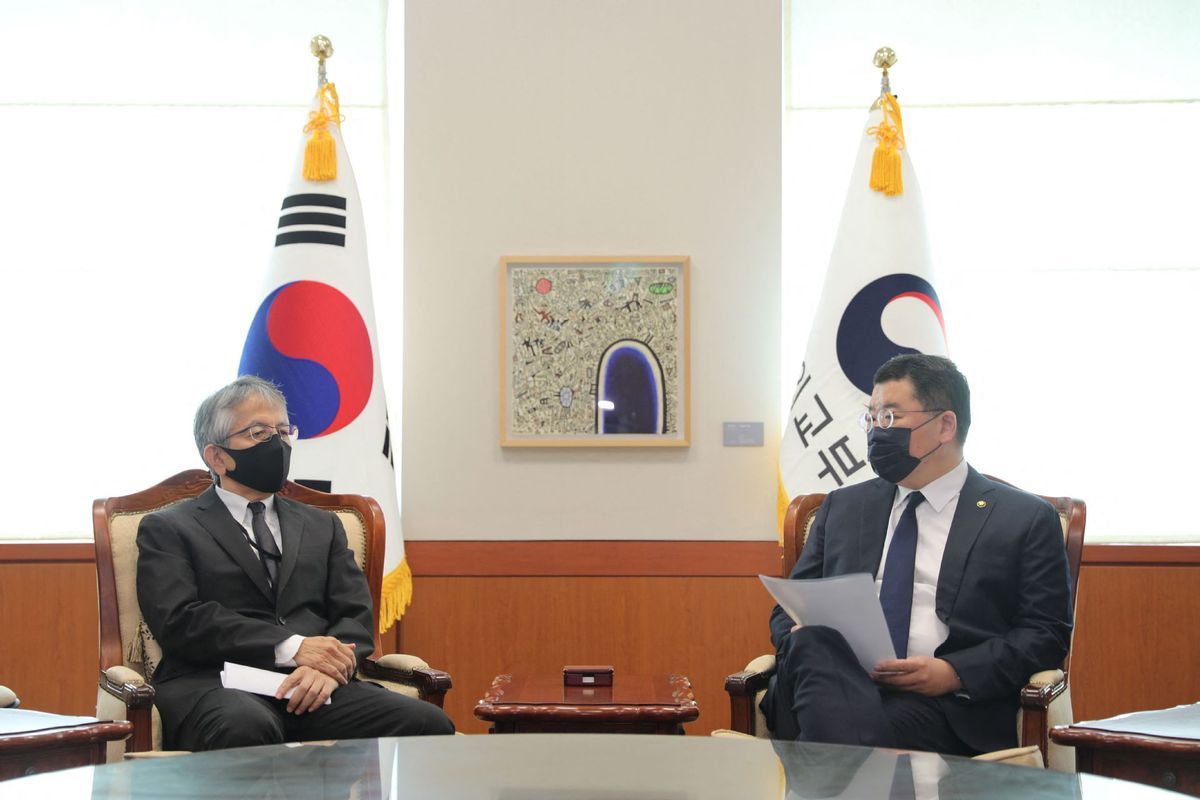 ROK Vice Foreign Minister Choi Jong-kun (R) speaks to Japanese Ambassador to South Korea Koichi Aiboshi (L) at the Foreign Ministry in Seoul after ROK summoned the Japanese ambassador over "undiplomatic" remarks about President Moon Jae-in and the possibility of a summit at the upcoming Tokyo Olympics on July 17, 2021. (Photo: Agencies)

TOKYO/SEOUL－Moon Jae-in, president of the Republic of Korea, will not visit Tokyo for the upcoming Olympics, his office said on Monday, scrapping plans for what would have been his first summit with Prime Minister Yoshihide Suga.

"President Moon has decided not to visit Japan," Moon's press secretary Park Soo-hyun told a news conference. "As the Tokyo Olympics is a peaceful festival for all people around the world, we hope that Japan will host it safely and successfully."

Moon's decision further inflamed relations between the two nations feuding over territorial claims and their wartime history, dashing any remaining hopes that the Tokyo Games might offer a fresh start for bilateral and regional cooperation.

Japan's Yomiuri newspaper reported earlier on Monday that Moon would visit Tokyo and hold a summit with Suga on Friday to coincide with the start of the Tokyo Olympics. But both governments later denied a meeting had been finalized, with Moon's office citing a "last-minute obstacle".

The diplomat, who was not identified, added in the same interview with the ROK's cable network JTBC that Moon was in a "tug of war only with himself" since Japan has "no space to pay attention to Seoul-Tokyo relations" at the moment.

Following the report by JTBC, Japanese Ambassador Koichi Aiboshi said it was his deputy Hirohisa Soma who had spoken the "highly inappropriate" words, though he did not confirm exactly what was said.

Japan is also planning to replace the senior Seoul-based diplomat after his reported comments regarding Moon's dealings with Japan, the Yomiuri said.

In Tokyo, Japan's top government spokesman also said the ambassador cautioned his deputy over the reported remarks, calling them "inappropriate".

"The remarks were inappropriate as a diplomat, and we think it is very regrettable," Chief Cabinet Secretary Katsunobu Kato told a regular news conference.

In response to the report on the diplomat's removal, Kato said the foreign minister would decide on personnel issues at overseas missions, and did not provide further details.

"He also demanded the Japanese government promptly take tangible and due steps to prevent a recurrence of such a situation," the ROK Foreign Ministry said in a statement.

Suga this month called relations between the two neighbors "very difficult", adding that it was up to Seoul to provide a response to the problems.

Moon had earlier hoped the Olympics may offer an opportunity for the Democratic People's Republic of Korea and the ROK to improve relations and revive peace talks, before Pyongyang announced it would not take part because of coronavirus concerns, Reuters reported.