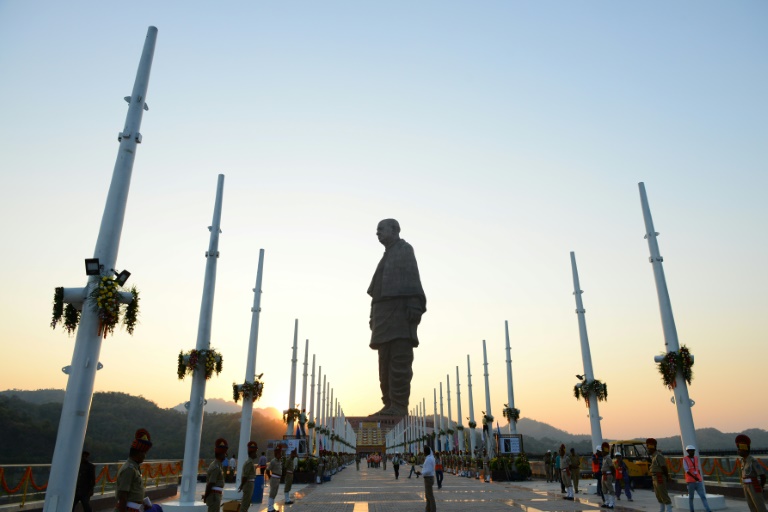 Indian officials were concerned that community groups could stage protests to demand compensation for land taken to erect the Statue of Unity.(Photo: AFP)

India inaugurated the world's tallest statue on Wednesday with fireworks, folk dances and floral tributes, deploying tight security amid an outcry by local groups over the soaring cost of the 182-metre (600-feet) sculpture of an independence hero.

Prime Minister Narendra Modi officially opened the statue of Sardar Vallabhbhai Patel describing the completion of his pet project as "a day that will be remembered in the history of India".

Air force jets flew over the giant figure and clouds of rose petals were dropped from helicopters onto its head as Modi bent in front of the statue on the ground.

Modi hailed Sardar Patel's "strategic thinking" in bringing together the disparate country after independence in 1947 and described the Statue of Unity as "a symbol of our engineering and technical prowess".

But the authorities took no chances in case community groups staged protests to condemn the decision to spend 29.9 billion rupees ($400 million) -- much of it public funds -- to build the statue over a nearly four-year period. Hundreds of Chinese have been among the 3,500 workers involved in its construction.

Drones and helicopters kept watch on the area, according to police, after the chiefs of 22 villages signed a letter calling on Modi to stay away from the inauguration.

Posters of Modi with Gujarat Chief Minister Vijay Rupani were torn down or had their faces blackened at the weekend. Police guarded new posters put in their place.

"I am not against Sardar, but what is the use of the statue if the people on the land have to suffer and are moved from their homes?"

The Gujarat government said the 185 families moved to make way for the statue had been compensated and given 1,200 acres (475 hectares) of land.

More than 80 percent of the local population are from tribal groups with special protected status.

In the largely tribal town of Dediapada, roughly 60 kilometres (37 miles) from the statue, villagers shuttered shops and closed the main market for the day in protest.

"We are still facing problems of water, health infrastructure and employment," one resident, Vikram Vasava, told a local broadcaster.

"How will the statue help us?"

Sardar Patel was a deputy prime minister in India's first post-independence government. He became known as "the Iron Man" by convincing feuding states -- sometimes with a threat of force -- to join the new united country.

His name had been largely overshadowed by the Nehru-Gandhi dynasty that has dominated Indian politics since 1947. But Modi-inspired nationalists have sought to put him back in the forefront, with critics accusing them of appropriating his legacy.

The statue is more than twice the size of New York's Statue of Liberty and also dwarfs the 128-metre (400-feet) high Spring Temple Buddha in China, the world's next-biggest statue. It is made up of nearly 100,000 tonnes of concrete and steel.

Online booking to visit the Statue of Unity has opened with a 350 rupee ($4.75) admission fee for the 153-metre-high observation deck.

Indian authorities hope the statue will attract 15,000 visitors a day.

India is also working on a giant statue of 17th-century warrior king Chhatrapati Shivaji, riding a horse and brandishing a sword, which should dominate the Mumbai shoreline from 2021. The current design would make it 212 metres high.