Deep in Tana River County, in southeastern Kenya, a group of pupils formed a circle around their teacher, jotting down notes as they listened to a Swahili diction lesson coming from the solar-powered radio sitting in their teacher's lap. 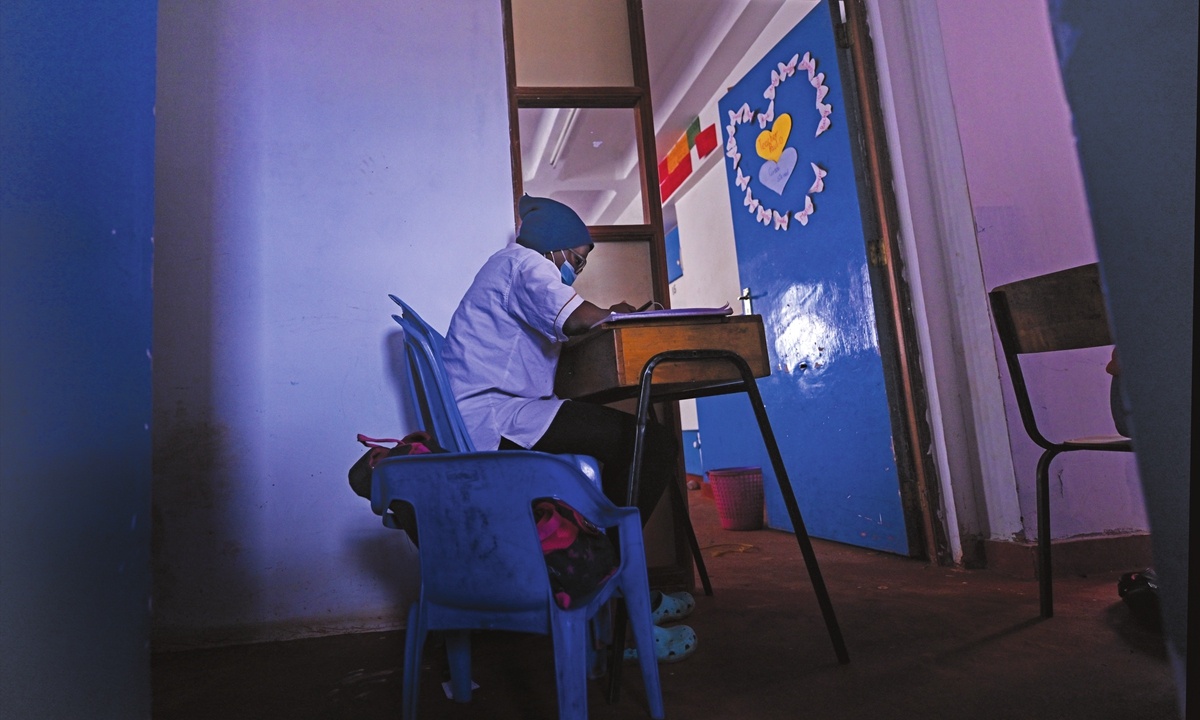 A student sits at her desk along a corridor at Kibera in Nairobi, Kenya on August 7, as she studies at Kibera School for Girls. Photo: AFP

The radio the children from Dida Ade primary school gathered around was one of hundreds distributed for free to the most vulnerable households in the semi-arid region east of Kenya's capital, Nairobi. The radios allow children without internet access or electricity at home to continue studying while schools are closed to slow the spread of COVID-19, in a project that could also help children stay in school after the pandemic.

Funded by the Zizi Afrique Foundation, a Kenyan nongovernmental organization that produces research to drive education policy, the solar-powered radios also come with bulbs for household lighting and slots for phone-charging.

When schools across Kenya shut in March to slow the spread of COVID-19, Zizi Afrique did a survey in Tana Delta subcounty and found that just over one-fifth of households owned a radio and only 18 percent had access to electricity.

"We immediately knew something had to be done to bridge the gap," said Sara Ruto, who leads the foundation's accelerated learning program.

The foundation has distributed 1,660 solar radios in Tana River and Turkana counties since the project launched in May.

The solar-powered radios take a day to fully charge, and after that the battery can last up to three days, she added.

Zarah Abude, an 11-year-old student at Imani Primary School in Tana Delta subcounty, said the solar lights were an improvement on studying by the light of a fireplace or kerosene lamps, which can fill a house with smoke and toxic fumes.

Each year, nearly 4 million people die from illnesses linked to indoor air pollution caused by the use of polluting fuels, according to the World Health Organization.

"We used to light firewood at night, or when there is enough kerosene in our home, we would light the tiny metal lamps to help us conduct our studies," Abude said.

"Now, at least, we have these solar lamps that are clean and produce more light."

James Nyagah, Tana River County's director of education, said the project was especially important after the government's ambitious initiative to get tablets into schools proved to be of little help during the pandemic. The government had distributed nearly 1.2 million tablets to primary schools around Kenya in phase one of its Digital Learning Project, launched in 2016. But, when schools shut their doors earlier in 2020, the tablets were locked inside them.

"Most teachers are not locals, so when schools closed, the teachers went away with the keys," said Nyagah, noting that pupils were not allowed to take the tablets home.

"The radio project will go a long way in mitigating that challenge," he added.

Those households each received a radio and pupils from neighboring homes can congregate there to listen to educational programs, either on their own or with a teacher.

During the week, the station broadcasts lessons in English and Swahili, and on Saturdays, lessons are broadcast in Swahili only for students who are not fluent in English, she explained. Zizi Afrique plans to expand the distribution of solar radios to eight additional counties, even after schools reopen in January, she added.

"We are also willing to share the idea across the continent with other development organizations and governments, to ensure pupils in far-flung areas have access to a quality education," Ruto told Reuters.

Athman, the head teacher at Dida Ade, praised the project, but said it would be more effective if the government employed additional teachers to reach students in remote areas and supplemented what they learn from the radio programs.

With schools still closed to most students, many children have to help their families with housework and livestock-tending, which often involves moving the animals around to find grazing, he explained.

"This makes it hard for our available teachers to keep on following the students everywhere they move," Athman said.

"Before the radios came, we used to graze the animals each day. We still work, but not every day - and on Saturday we have to listen to the radio," he said, smiling.